Canadian Automobile industry is being poisoned to slow death! 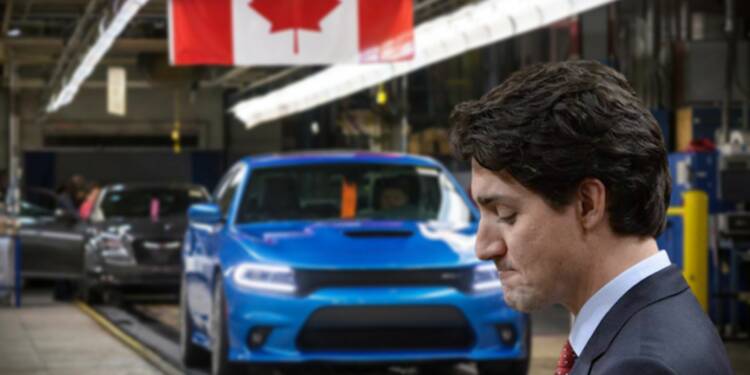 Vehicle production is plunging across the world as automakers struggle to get their hands on vital computer chips, leading to lengthy downtime at assembly plants and posing a threat to the economic recovery. Even so, the Canadian slowdown is especially severe. The Canadian automobile industry is on the verge of collapsing and there’s only one person to be blamed- Justin Trudeau.

In August, light-vehicle production in Canada tumbled 38 per cent from a year earlier, according to data from research firm Wards Intelligence. Many auto manufacturers in Canada have been forced to close plants – not only due to tightened health and safety protocols, but also due to an ongoing shortage of semiconductor chips which are needed to power various vehicle features such as power steering, reversing cameras and emergency braking systems.

Some manufacturers have announced reduced production targets as a lack of semiconductor chips continues to limit production. General Motors Co. closed its plant in Ingersoll, Ont. early in 2021, and the manufacturer recently announced that it will reduce production at most North American assembly plants due to the chip shortage.

The fallout is evident in Canada’s labour market. Nearly 10,000 jobs in auto manufacturing have yet to return, and the number of people getting jobless benefits through employment insurance remains high in places such as Windsor, Ont.

It amounts to a sizable hurdle on Canada’s road to recovery, particularly so for parts of Southern Ontario where the auto industry plays an outsized role in the local economy.

The impact is apparent at car dealerships. In September, vehicle sales in Canada dropped 20 per cent from a year earlier, which analysts blamed on a lack of supply. With fewer cars available, the price of new vehicles has jumped 7.2 per cent over the past year, according to the latest inflation data from Statistics Canada. Lightly used vehicles are often selling for more than when they were new.

“The demand is just super strong, and the willingness to pay is really high,” said Rebekah Young, director of fiscal and provincial economics at Bank of Nova Scotia. “But it’s the supply constraint that’s hurting things.” (sic)

Canadian Automobile industry has also been hit over by the US$12,500 EV incentive, which applies only to U.S.-made, union-made vehicles. The federal Liberals are threatening a full contingent of trade remedies, ranging from court fights and challenges before the World Trade Organization, to retaliatory tariffs.

Few industry executives would disagree that Canada needs a cohesive plan for its automotive sector, and now more than ever with a relatively short timetable to pivot the industry to EVs.

The one thing they all have in common is that the car of the future will be electric. More crucially, for any discussion about the health of the Canadian Automobile industry, they will all require batteries of some kind, and the auto industry will require extraordinary new supply of raw materials. It’s a transformation that will necessitate a level of government backing — and political determination — that the Trudeau administration has yet to demonstrate.

To create a more unified industry, there is an urgent need to coordinate existing work on electric vehicles in Canada among auto manufacturers and parts companies, research centres, and consultancy firms. Public awareness campaigns, infrastructure improvements, and collaboration with power corporations are also required. Unfortunately, very little of this has occurred. It is past time for the Trudeau administration to awaken from its profound slumber and address the escalating crisis confronting Canadian Automobile industry.

Canada: Possibly the only developed nation that has zero internet connectivity in rural areas