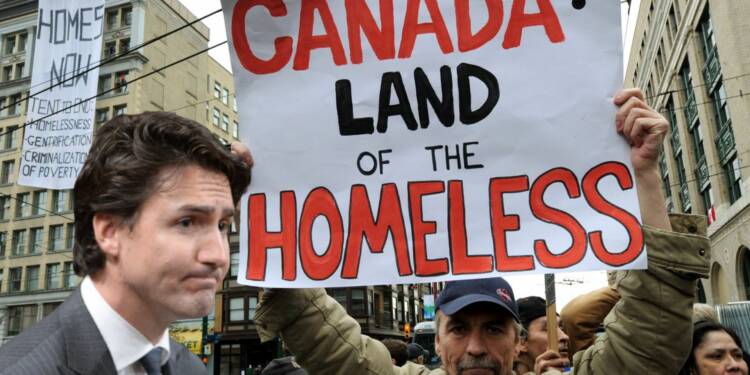 Montreal Model: Canada is heading towards a population crisis, where getting homes for Canadians to reside might be a challenge in the near future. What makes this challenge worse is the sheer ignorance of the government. In addition to this, the plans of the liberals to welcome more foreigners into the country simply adds to the problem wherein more people will be forced to sleep on the streets and will be facing challenges related to poverty which would ultimately impact Canada’s governance.

Ottawa is the second fastest-growing city in Canada which is unable to keep up with the housing demands of the rising population. Ottawa is building homes at the highest rate in nearly 50 years, according to a report from the Canada Mortgage and Housing Corporation (CMHC), but experts warn that this may not be enough to meet the huge demand.

In 2021, there were more than 10,000 new housing starts. The majority of these were in urban and suburban areas close to the Greenbelt. In addition, the report pointed out that, in comparison to other cities, Ottawa has a significant amount of row housing being constructed; approximately a third of all development was comprised of row houses. According to the report, supply is “The biggest issue affecting housing affordability”. While the value of older properties is not declining, new construction typically commands higher prices. As a result, people at the bottom of the market are being squeezed out, which will present a significant policy challenge for the city, the province, and the federal government.

The government has presented an ambitious plan “Canada’s 2023-2025 Immigration levels plan” wherein the government is proceeding with that desire by setting focus on the new levels plan of 465,000 permanent residents in 2023, 485,000 in 2024 and 500,000 in 2025.. In addition, the plan emphasizes bringing new residents to various parts of the country, including rural and small towns.

As astonishing as these figures seem, as difficult as they might get for the government in the near future if the growing housing demand is not met by adequate supply. Nevertheless, not all cities view this problem as a major one considering how Montreal has displayed an exceptional model to tackle this.

While Montreal’s population graph did not experience an incline after the pandemic, its organization has shown efforts to deal with the current problem of increasing population and further ensure that people are not compelled to take on the streets. As soon as winters arrive in the city, officials launch initiatives such as converting hotels into emergency shelters and unused hospitals into isolation units, while boosting a variety of homeless services.

It is estimated that around 4,000 people are homeless in Montreal. This is not just a seasonal challenge occurring only in winter but stays throughout the year wherein more people are pushed towards homelessness. As a result, homeless organizations in Montreal are pleading with the three levels of government to invest more in long-term change, requesting more resources and social housing to help people find permanent housing.

The major organizations in Montreal came together to create a three-step strategy to guarantee that there will be sufficient support and rapid access to emergency services to permanently house approximately 2,250 people, providing rent subsidies and ongoing assistance as they regain their footing. Community housing organizations, the city, and the local health agency, the CIUSSS du Centre-Sud-de-l’Île-de-Montréal, have collaborated over the past few months to ensure that approximately 1,600 emergency beds are available throughout the year.

Last winter, Montreal proposed to the government of Quebec that the seasonal approach is discontinued and that permanent beds be made available all year round, seven days a week. Nevertheless, no action was taken following this request which puts the organizations in a tougher spot to act for a long time.

The growing population and its related challenges are going to worsen in Canada and can be foreseen as unavoidable taking into consideration, the government’s lack of commitment towards the problem and extension of further migration schemes inviting more immigrants to the country. While Quebec experiences a rising population challenge, Montreal lags support of the provincial government which puts a question mark on Trudeau’s governance.