According to the report, families of Ghanaian workers who lost their lives due to Chinese abuse and neglect on their vessels have not received proper compensation 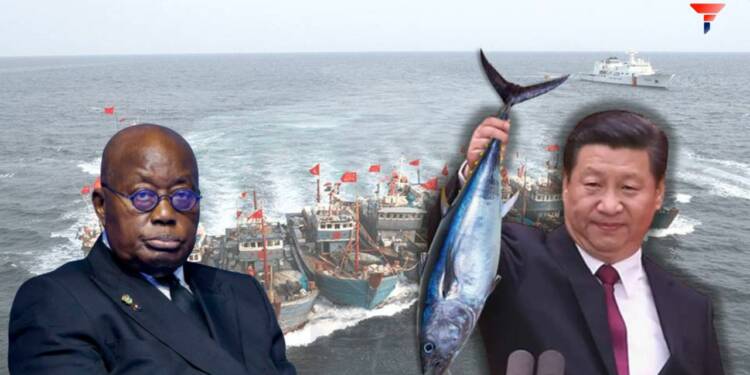 Ghana fisheries: China’s exploitative fishing practices in Africa have become a huge menace to Africans. China is not just stealing fish and depleting its fish stocks but now it has turned into something even more vicious that has created an environment of fear among local communities. The high concentration of Chinese ownership within trawl fleets in West Africa is a major problem and with this comes physical abuse, corruption and even death for locals. This menace has now reached alarming proportions particularly in Ghana.

The condition of Ghanaian workers aboard Chinese-owned fishing vessels is so appealing that it has even led to deaths but that is not even the worst part. Today, Chinese abusive, exploitative and illegal motives have created such an atmosphere where the Ghanaian fishermen are helpless and scared for their lives with virtually no remedy.

Ghanaian workers have reported shocking human rights abuses, from beatings to lack of drinkable water or basic medicines and cruel working hours. As per a report, they have been treated like “slaves” and even forced to work for days without sleep and sometimes without food.

According to the report, families of Ghanaian workers who lost their lives due to Chinese abuse and neglect on their vessels have not received proper compensation.

Examples of the alleged widespread abuse and neglect linked to Chinese fishing vessels are plenty.

As per a UK-based Environmental Justice Foundation (EJF) at least 90% of the industrial trawlers operating in Ghana are owned by Chinese corporations. Moreover, the Chinese trawlers are operating in Ghana in contravention of Ghanaian laws on the ownership of vessels fishing under the local flag. A substantial proportion of these vessels have engaged in illegal practices. Thus, although it is illegal for foreign vessels to fish in Ghana, over the last decade Chinese-owned vessels have only proliferated.

90% of trawlers operating in Ghana are owned by Chinese corporations even though it is against Ghanaian law. To get around the law, they use Ghanaian ‘front companies’ to gain registration. Ghana has no official or bilateral fishing agreement with China. But Chinese companies use high profile Ghanaians, well connected with power, who for a fee, front for them. That’s how Chinese nationals occupy the more senior positions on board the vessels, where Ghanaian crew occupy the lower roles. The worst forms of abuse are thus perpetrated on Ghanaian workers by these Chinese captains on the vessels.

Living conditions on board are appaling. Many workers have testified to the gruesome conditions on these vessels. One worker said “the tank we drink from is very dirty and rusty, but we still drink from that same tank…Sometimes after drinking the water, we suffer from stomach pains, vomit and diarrhoea.” Many also have to lose their lives due to lack of treatment. On top of it all, the crew members are forced to work for more than 14 hours a day.

Out of 36 crew members interviewed by EJF, 94% had received inadequate medicine or witnessed verbal abuse, 86% reported inadequate living conditions, 81% had witnessed physical abuse, and 75% had seen serious injury at sea. Ironically, In response to this, the Chinese embassy says it is a “responsible fishing country”.

This is not all. Since 2018, Ghana has appointed fisheries observers on board all industrial trawlers operating under the Ghanaian flag. Their job is to collect data on fishing activities and report on illegal practices at sea. However, these observers are intimidated and threatened by Chinese nationals. One of the most notorious cases has been the disappearance of a fisheries observer. This incident has created panic among fisheries observers of Ghana. This has pushed the observers to take bribes to bury evidence of illegal fishing and abuse on Chinese vessels.

It is well-known how Chinese boats are depleting West African fisheries and fishing villages. Africa loses billions of dollars due to illicit fishing by Chinese boats. Illegal fishing costs West Africa almost $1.95 billion across the fish value chain and $593 million per year in household income. However, now Chinese exploitative practices are now having not just economic consequences. Increasing cases of abuse, disappearance and poor pay have created panic and are now threatening the very existence of Africans who have depended on fishing for a living.