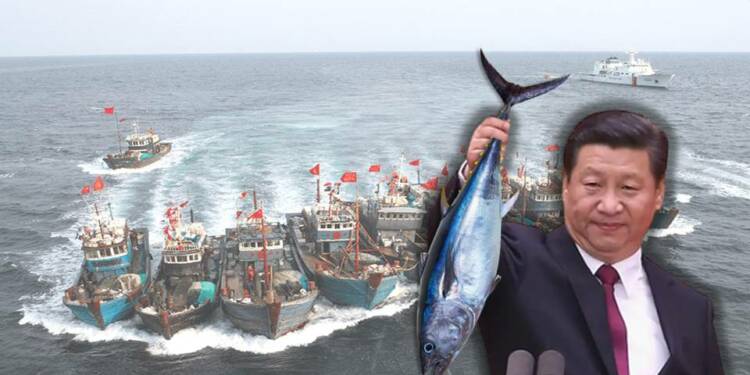 Environmental organisations contend that Chinese boats are depleting West African fisheries and fishing villages in the Gulf of Guinea.

A South African think tank, the Institute for Security Studies, estimated that the towns might lose more than $2 billion year to illicit fishing, primarily from Chinese-owned boats.

Geoffroy Gbedevi, a fisherman from Benin, claimed that providing for his wife and daughter is becoming more difficult. He stated that because less fishes are being caught than in the past, the community is suffering.

Numerous investigations have shown how Chinese vessels engaged in illegal fishing are depleting stocks, sometimes even selling the fish back to the local communities whose livelihoods and food security have been undermined.

China is the world’s biggest fish producer and has the largest distant-water fleet (CDWF) — officially 2,701 vessels but likely thousands more — many of which engage in high instances of illegal, unreported and unregulated fishing, according to an NGO, the Environmental Justice Foundation.

The group’s report found that some 90% of Ghana’s industrial trawl fleet is actually owned by Chinese corporations using local “front” companies to register as Ghanaian and get around the law.

“Illegal fishing and overcapacity in the Ghanaian trawl sector is having catastrophic impacts on coastal communities across the country (sic),” EJF’s Chief Operating Officer Max Schmid told VOA by phone, with some 80-90 percent of local fishers in Ghana reporting a decline in income over the last five years.

Women — who are usually responsible for processing and selling the local catch — are often hit hardest by the loss of income, turning to transactional sex, according to EJF, a phenomenon locally dubbed as “fish for sex.”

Meanwhile, locals working on the Chinese trawlers often experience human rights abuses, with ten Ghanians interviewed by EJF saying that they had all “experienced or witnessed physical abuse by Chinese captains.”

It’s also becoming more and more common for the Chinese vessels to catch small pelagic fish, which are the main population caught by small-scale fishers, and then sell them back to communities for profit, the organization found.

The fact that penalties are rarely imposed on Chinese vessels that violate their respective country’s national laws is one of the objections raised by many common people in Africa. Corrupt government officials frequently brushed aside the unethical practices of China. But this is no longer the case. African governments have begun to recognise the unscrupulous role that Chinese vessels undertake on their territories.

Midway through December, Benin and Togo finished their initial combined patrol operation. It was supported by the PESCAO initiative of the European Union, which aims to improve regional fisheries governance in Western Africa. Late in December, Ghana signed the pact.

Besides at-sea patrols, the countries will share information from the Regional Monitoring, Control and Surveillance Centre in Ghana, which was formed by the Fisheries Committee for the West Central Gulf of Guinea (FCWC) in 2021.

The nations’ agreement is seen as proof that they are taking artisanal fishermen’s concerns seriously and are dedicated to developing their blue economies. The accord is anticipated to include Côte d’Ivoire as well.

African countries are beginning to understand the value of self-determinism and self-sufficiency in the current political and economic environment. Rising nations like China have been attempting to pillage Africa for a long time by grabbing its immense natural resources. The wealth of these predatory countries is based on the debt slavery of Africa. However, a pan-African uprising against this neo-imperialism has recently grown. With additional African nations following suit, China’s aspirations of plundering Africa and its waters would be scuttled.