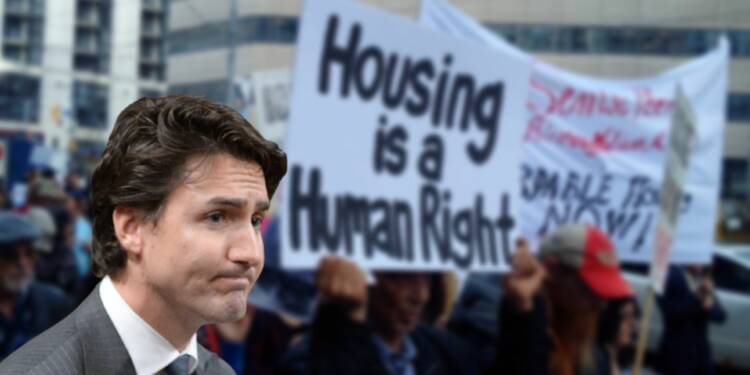 Canada housing crisis: Covid 19 came as a virus affecting health but it was also a great confusion for the policymakers wherein the post-lockdown era was difficult for governments to understand. The more substantial challenge was mutant problems that emerged out of covid. As they affected many areas such as stabilizing the economy, ensuring minimum wages, etc. Canada was no exemption in this scenario where the bigger picture claims Trudeau to be mismanaging the crisis.

Daycares are back in operation, students are returning to in-person classes, and Toronto’s transit system has increased service in recent months. Before COVID-19 changed the world, things were the same. However, despite the gradual return to normal, the city may feel smaller. Workers might be more willing to make concessions if unemployment and interest rates continue to rise.

The report from the chamber of commerce says that Toronto isn’t the only hub with less traffic. The largest city in Canada performed better than Kitchener and Vancouver, but worse than Ottawa. Gatineau, Quebec.

Burnaby and British Columbia both saw a larger decline in foot traffic. Even though foot traffic is down, tourists and business travelers are coming back, which is good news for the local economy because a decreased foot traffic can affect business activity.

As the retail sector prepares for a busy holiday season, Ontario’s labor market continues to experience a severe shortage of workers to fill positions. The ongoing trend is troubling, according to labor experts, and the federal government must intensify its immigration efforts to attract foreign workers. According to Monte McNaughton, the minister of labor, there are over 370,000 open positions across the province, but not enough people to fill them.

Owners of businesses are having trouble finding employees as a result of the tight labor market. The most recent employment statistics from Statistics Canada put the unemployment rate at 5.2%, which some economists call “full employment,” or a situation in which virtually anyone who wants to work can find work. Canada’s productivity performance over the past two decades has been pretty awful if you look at the G7 economies and the OECD, which is a group of 38 economies. Canadian businesses did not spend as much on capital investments as American businesses did during the period of historically low-interest rates in advanced economies.

It is evident that Canada is experiencing a labor shortage to keep up with ongoing industrial activities. What is more alarming, is the parallel population and housing crisis that is going to be a challenge for the government when it aims to bring in more immigrants. Canada is experiencing a housing crisis due to an imbalance between the number of people required to construct those homes and the increasing number of homes that are required. The Royal Bank of Canada says that relief may be on the way, despite the fact that housing affordability crisis of Canada has become worse than ever due to the rapid rise in interest rates. If you live in Vancouver or Toronto, where paying for a roof over your head requires 95.8% or 85.2% of your income, respectively. In the meantime, due to rising interest rates, nearly two-thirds of Ontarians say they spend more than 30% of their budget on housing. Nearly 95% of them say that the cost of living is higher than it was two years ago. Half of them say that they have had to cut back on spending on restaurants, entertainment, and groceries because mortgage rates are rising.

Canada has to rely on immigration rather than natural growth to replenish the labor pool because of declining labor force participation rates, an aging population, and declining fertility rate. As a result of the growth that immigration has sparked in the workforce of millennials and Gen-Z, Canadian policymakers are aiming to bring in more than 400,000 immigrants annually between 2022 and 2024. But the problem remains that if such a large amount of labor force is needed to be called to Canada, adequate provisions are also needed to accommodate them.

The government’s ambitious plans to increase immigration do not suffice with the fact that housing demands are increasing. Indeed, labor is needed to construct these houses but as interest rates remain high, it is significantly impossible for the migrants to afford a minimum house to stay in. While the population keeps stacking up, housing remains stagnant with higher prices making them unaffordable for many. This is directly leading the Canada towards an unmanageable housing crisis.