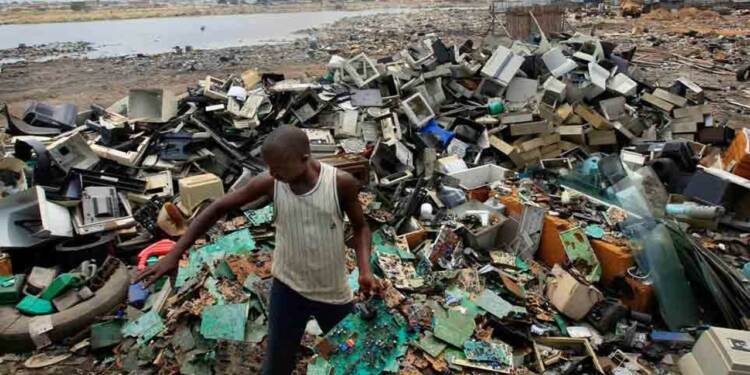 E-waste is a growing global challenge and if not dealt with effectively it can lead to a serious global health crisis. The continent that has been already battling a crisis of sort due to E-waste is Africa. For long, Africa has been treated by the rich world as the dumping ground for these waste that pose serious health and environmental hazards. Now, Spain has unearthed such a cabal that has been polluting west Africa and minting money out of it. Let’s discuss.

An organization that had sent more than 5,000 tons of hazardous electronic waste from the Canary Islands to several African countries have recently been dismantled by Spanish authorities. Electronic waste was being sent to  countries like Senegal, Nigeria, Mauritania and Ghana by the organization.

By dumping these hazardous electronic waste in Africa the organization minted money. According to the Spanish Customs and Civil Guard, the “criminal organization that, during the last two years, had managed to send from the island of Gran Canaria to Africa more than 5,000 tons of hazardous waste of electronic devices, would have earned more than one and a half million euros” of profit.

The waste was sent by boats to the African countries. 43 people were arrested “for alleged environmental offences, forgery and membership to a criminal organization”.

Africa E-waste problem, thanks to the West

Agbogbloshie dump, is a wasteland dotted with burning mounds of trash in Ghana’s capital, Accra. It has also been referred to a “digital dumping ground” where allegedly millions of tons of e-waste are processed each year. It has also become one of the world’s largest destinations for used electronic goods.

Most workers here complain of common ailments like Burns, back problems, infected wounds, respiratory problems, chronic nausea, and debilitating headaches etc. due to the hazardous working environment and toxic air pollution. A significant proportion of this E-waste is often illegally sent from Europe and the US. Around 50 million tons of electronic waste, or e-waste, is being thrown away each year, according to a report published by the United Nations which is only projected to double by 2050.

In Ghana, the waste arrives via the Port of Tema, 20 miles to the east of the Agbogbloshie dump, mainly from the West. This has been carried out by labeling them often as “secondhand consumer products”.

At Agbogbloshie, people face various health hazards due to the high pollution levels. Skin diseases and respiratory illnesses are common here. The living conditions around these sites are inhuman and miserable. The main African recipients of e-waste are Nigeria, Ghana, and Tanzania. Kenya, Senegal and Egypt are some countries of concern too. The lack of proper waste management in the recipient developing countries, leads to environmental contamination and human exposure.

For long Africa has been treated as the dumping ground for Europe.

These toxic wastes are moved from the rich western world to the African countries where it is dismantled for valuable metals in informal settings. It results in significant human exposure to toxic substances. The improper dumping and recycling of e-waste in Africa poses health hazards to individuals of all age and children are the most vulnerable. Such a high magnitude of condescending attitude on part of the western countries questions their talks on humanity. The harmful substances released from it can pollute soil, water, air, dust and food sources.

Numerous studies have reported contamination of e-waste workers and local residents with toxic metals, dioxins and furans, brominated flame retardants etc at these sites. African countries have demanded tougher laws to end this influx of electronic waste from Europe. Stringent environmental laws make exporting used goods cheaper than disposing off them at home in Europe and it has turned Africa into its dumping ground.

African leaders must join hands to end this evil once and for all to protect its people, environment and resources from the exploitative intentions of the West before its too late.