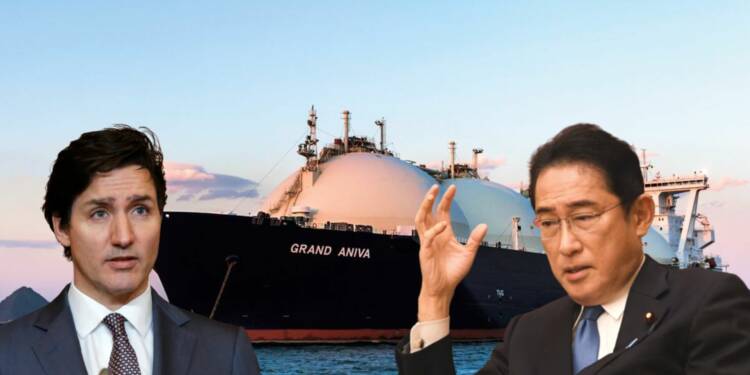 Canadian PM Justin Trudeau failed with formulating sound economic principles, his political persona was based entirely on appealing to liberal elites and first-time voters. His majority of campaign pledges centered on popular themes like decriminalizing marijuana and upholding environmental regulations.

Since Trudeau entered power, the Canadian economy has tended to grow more slowly and experience substantial contractions. The economic harm Trudeau has caused to Canada in just 7 years is unprecedented.

Against this backdrop, a new study by the Conference Board of Canada showed just how big the economic impact of a thriving Canadian liquefied natural gas (LNG) industry could be. This includes $500 billion in investments, and the creation of almost 100,000 jobs a year.

Noting that B.C. is becoming the focal point for developing a Canadian LNG industry, and that Canada produces almost twice as much natural gas as it uses, the report stated, “Liquefying the gas and exporting it offers an important diversification opportunity, especially when our traditional export market — the United States — is becoming increasingly self-sufficient in natural gas.

Certainly, Canada should seize possibilities to strengthen the country in order to escape the current economic position. On the other side, the Trudeau administration enables its radical ideological goal to trump sound judgment. Germany recently requested LNG supplies from Canada, but the Liberal government declined. Without a doubt, Canada would have benefited from exporting LNG to Germany since it would have brought in money at a time when the country desperately needed it.

The battle between Russia and Ukraine, you see, has already highlighted the importance of oil and gas-rich countries. European countries are keen to lessen their reliance on Russian oil and gas, creating an excellent opportunity for countries such as Canada to become a reliable supplier of energy to European countries. But all of this is too complicated for the liberal poster boy to grasp.

To be clear, Trudeau has always prioritised himself over Canadian national interests. While expanding Ottawa’s LNG infrastructure would undoubtedly be a ray of optimism for the country’s battered economy, it would also enrage environmentalists worldwide. And this is something that the image-conscious Liberal Prime Minister would never want. He wants to maintain his “false” image of a progressive liberal prime minister. This is precisely why the Liberal government turned down Germany’s request in order to get cosmetic plaudits from so-called progressives throughout the world.

It will be the first Canadian visit by an Asian head of government since Ottawa launched its Indo-Pacific strategy last November, which called for closer ties with countries that can counterbalance China’s influence.

Japan is similarly trying to pivot away from a reliance on China and Russia for electricity and food.

To that end, Kishida has created the position of a minister of state for economic security, and is trying to bring nuclear reactors back online after dozens were halted following the 2011 Fukushima disaster.

The country is so reliant on Russian fuel that G7 countries gave Japan an exemption on a measure that caps the price of Russian oil below market rates, to avoid Japan facing the same scramble for energy that Europe undertook last year.

Trevor Kennedy, the Business Council of Canada vice-president for international policy, said Kishida will likely seek a further commitment from Canada to sell liquefied natural gas, and mention an ongoing interest in hydrogen.

“They’re stuck in a situation where they’re sourcing their LNG from Russia, and they don’t have another option,” said Kennedy, who has worked in Japan.

Japan and South Korea have invested in Canada’s first LNG export terminal in Kitimat, B.C., which is set to come online in 2025.

Kennedy said both countries and Canadian firms are watching to see whether the terminal meets that timeline, given the delays other large energy projects in Canada have faced

To be honest, the Japanese Prime Minister is extremely naive if he assumes the Trudeau government will accept his demands after what Ottawa did with Berlin a few days ago. Consequently, for Trudeau and his American masters, resolving the problems of their European counterparts is paramount. So, if Trudeau has resisted assisting his European contemporaries, Kishida’s belief that Trudeau would consent to aid an Asian nation is pure conjecture. Indeed, Japan is betting on the losing horse named Trudeau, and soon after the meeting, it will only be Kishida who will be unmasked as an extraordinarily ignorant leader.