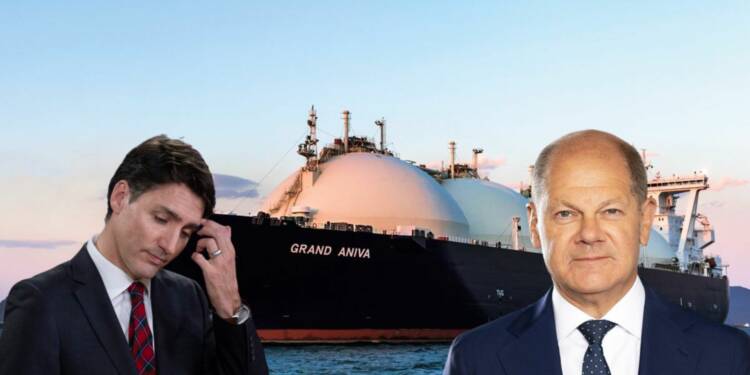 Canada ought to take advantage of opportunities to improve the country in order to escape the current economic situation. On the other hand, the Trudeau government allows its radical ideological agenda to prevail over common sense. A wealthy ally Germany desperately wants and needs to purchase something Canada possesses in abundance. Selling fossils like LNG and oil will benefit Canada immensely but Trudeau regime thinks otherwise.

Investors are reluctant to hold Canadian dollars when interest rates are low, and the dollar tends to lose value. Exports are cheaper as the dollar falls, but devaluation as economic policy is disastrous. Due to the fact that most of Canada’s capital equipment is located outside of the country, particularly in the United States, a low dollar also increases the cost of productivity-enhancing investments.

Canada will benefit from selling LNG to Germany because it will bring in money at a time when the country absolutely needs all the money it can get. However, Germany’s requests for additional LNG from Canada were turned down by Prime Minister Justin Trudeau.

Germany hopes that liquefied natural gas (LNG) from Canada will make it easier for Germany to move away from Russian gas imports. There are currently no LNG terminals in Canada, but two are being constructed on the West Coast.

As Europe tries to reduce its reliance on Russian supplies, Canada is working to increase its natural gas export capacity by up to 100,000 barrels of oil equivalent per day by the end of the year. “Canada is doing our part to add to the global energy supply right now,” Trudeau said, adding, however, that the goal is to make the country a key supplier of clean energy like hydrogen.

Others have already taken advantage of an obvious opportunity because other players will not wait for Canada to seize it. The Wall Street Journal reported that Germany quickly constructed a new LNG terminal and is currently importing more LNG from the United States. The shipment made its way to the LNG import terminal in Wilhelmshaven, a port town on the North Sea. This facility, which was built in less than a year to help Germany avoid an energy shortage, was built at a breakneck speed.

Along with many other nations, the per capita GDP growth that the United States has experienced has been significantly superior to Canada’s. In fact, among all OECD nations, Canada is anticipated to experience the lowest per capita GDP growth between now and 2030. Canada could have easily changed this. It absolutely floats in natural resources, which other nations are eager to acquire.

According to the government, Canada, home to the Alberta tar sands, is the fifth largest oil producer in the world. Earlier this year, it announced plans to increase oil and gas production to assist its allies in Europe in separating themselves from Russia. Environmentalists have criticized this move, claiming that any rises, even in the short term, will prevent Canada from fulfilling its commitment to address the climate crisis. In order to meet Europe’s requirements, Canada will not be able to scale up LNG exports in time which puts Canada in a tough spot for Europe to trust it.

Advantage accrues to nations that seize opportunities. Countries that don’t take advantage of them fall behind. Canada’s per capita growth has lagged behind that of most comparable nations. Everything benefits from a higher GDP per capita because it indicates increased productivity. It will result in increased funding for healthcare, military, and infrastructure. It indicates that the government can finance itself even with lower tax rates essentially referring to the expansion of civilization.

Ambalapuzha Temple Kerala: Timings, Travel Guide, and How to reach