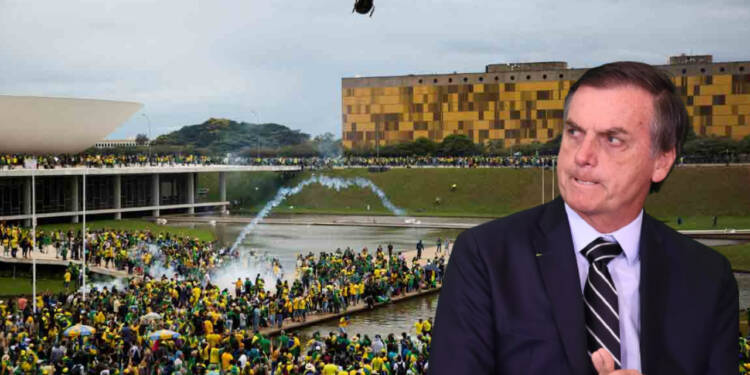 Let’s take a look at what led to the breaches in the Brazilian capital and what it means for democracy, Brazil and the world in general. After losing to Jair Bolsonaro in a runoff election on October 30, Luiz Inácio Lula da Silva, who had been out of office for 12 years, was sworn in as president of Brazil on January 1.

Then after, Jair Bolsonaro refused to acknowledge his defeat and fled Brazil for the United States before Lula took office. His Twitter account still shows him as the President of Brazil. Earlier, Bolsonaro claimed that certain polling equipment had malfunctioned. He even filed a petition to declare ballots from the election invalid. That petition was dismissed by the chairman of Brazil’s electoral court as “ludicrous and illicit” and “ostensibly conspiratorial toward the democratic rule of law.”

Chief Justice of the Supreme Electoral Court Alexandre De Moraes stated in his decision that all types of electronic ballots were “perfectly identifiable in a clear, secure and integral way.”

In the weeks following Bolsonaro’s defeat, thousands of his followers flocked to military barracks across the nation, pleading with the army to intervene because they believe the election was rigged, despite the lack of supporting proof.

Bolsonaro’s followers also set up camp in the capital. Due to the persistence of Bolsonaro supporters, Justice Minister Flavio Dino gave the go-ahead for the Armed Forces to erect barriers and secure the congressional building on 7th January 2023. But on the next day, the crowd got past those barriers.

The Three Powers Plaza buildings which included the Congress, the Supreme Court and the Presidential palace were attacked by Jair Bolsonaro’s followers.

Many political commentators in Brazil have already theorised that the intruders intended to not only invade the country’s capital but also to stage a protracted occupation of significant democratic structures. This would hinder Lula da Silva’s government from carrying out its duties successfully. By doing so, pro-Bolsonaro elements inside the military and law enforcement may potentially intervene, setting up the conditions for Bolsonaro to return to Brazil and grab power.

There is no other way to say it but the attacks were the beginning of what could have been a coup. The attack would go down in history as the most major attack on Latin America’s largest democracy since return of Brazil to free elections in the late 1980s.

What does it mean for Brazil and the world?

Brazil and its new President now face the challenge of restoring the rule of law, reiterating the nation’s commitment to democratic institutions in the military, law enforcement, and civil institutions, and reviving Brazilians’ faith in democracy.

Even though his presidency has only been in place for a little over a week, it now needs to address a serious and persistent threat to democracy of Brazil.

For the world, this highlights a serious problem. Brazil wasn’t the first country where such an incident occurred recently. The memories of the attack on Capitol Riot are still fresh. The attack in Brasilia symbolises a growing alliance between the right across the world, this time in the case of Brazil and the US, centred on the families of Donald Trump and Jair Bolsonaro, as well as their support networks.

Brazilian professor and disinformation specialist David Nemer foretold that Brazil will experience the Capitol Riot situation two years later. Now, the Bolsonarist conspiracy theories have been spread throughout US media by Tucker Carlson, a host of a right-wing Fox TV talk programme. For instance, a guest on the show asserted as fact without offering any supporting evidence that Bolsonaro-supporting demonstrations in Brasilia were peaceful and that agents provocateurs working for the new government were responsible for the bloodshed.

Although Carlson’s show does not have a sizable following in Brazil, Bolsonaristas’ spirits have been raised by links to the programme from right-wing influencers in that country, who realise that their message is being mirrored on a prominent US network.

The growing alliance is majorly seen in social media. The Capitol rights and stealing of the US election mandate saw its audience among Bolsonaro fans and bots who drove the narrative. Prior to the 2020 presidential election, US republicans set the stage for questioning the results. A similar thing happened with Bolsonaro fans who despite being in power, questioned elections time and again. The January 8 attack in Brasilia was an attempt to siege Brazil democracy. If things are not kept under control in such big democracies of the world, repercussions could be fatal for democracy all across the world.