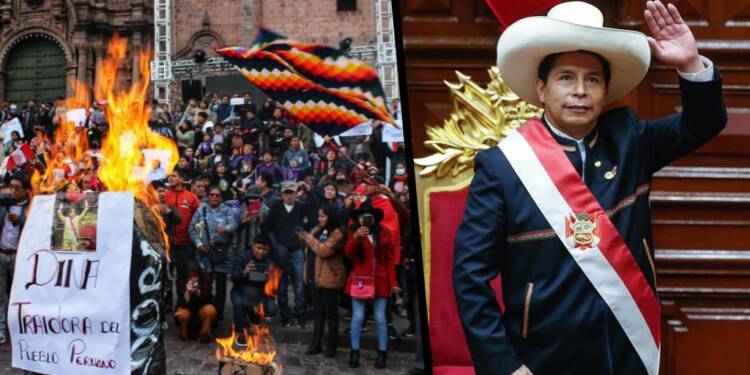 Pedro Castillo was Peru’s President from July 28th 2021 to December 7th 2022. After 17 months of being in power, Castillo was removed under the “official and legal impeachment” procedure.

The Western media covered the episode painting Pedro Castillo as “the evil leader who attempted coup” but they are far from the truth.

The whole episode is not only a clear example of how the US has jeopardized Peru’s democracy and disrespected its people and how it continues to strip Latin American countries of their sovereignty.

Pedro Castillo, farmer, and teacher was largely unknown in national politics until he managed to pull out unexpected victory in both the first and second rounds of the Peruvian presidential elections.

However, soon after taking over the office, he began to be the target of bogus accusations of corruption. The last 36 years have seen impeachment trials for every president of Peru on corruption-related charges. Two of them, including Alberto Fujimori, were imprisoned, while Alan Garcia, another former president, committed suicide as the police were about to arrest him.

Unfortunately for Pedro Castillo, Covid-19 began right as he took office. The nation Castillo inherited was bitterly divided and had a failing economy. Millions of Peruvians lost their jobs during the two years when the pandemic was active. The war in Ukraine made things worse for the Castillo government by driving up the cost of fertilizer and oil.

The Pedro Castillo administration was held in great regard by the populace. When Castillo ran for office, he promised that, if elected, his government would “nationalize Peru’s lucrative hydrocarbon and mineral industries. However, the elite prevented him from implementing his ambitious plans to enact laws that would have benefited the vast majority of Peruvians, and he was forced to renege on his campaign promises.

Rewriting the Constitution, which Alberto Fujimori’s authoritarian regime adopted, was another of his key election promises.

Pedro Castillo was seen by the political establishment and the economic elite in Lima as a political outsider from the outback who was unsuited to hold high office, and they were relentless in their efforts to remove him after they smelled blood. There was a total of six allegations of corruption and abuse of power against Castillo, all of which he has denied. There is currently no tangible evidence against him or his family members.

Washington’s Role in the Removal

On December 7th, in an unexpected televised speech, the Peruvian president addressed the nation and stated that Congress would be dissolved and an emergency administration would be put in place.

Media reports in Peru and Latin America claim that the US was involved in Castillo’s removal. The day before the turbulent events on December 7, Lisa Kenna, the US ambassador to Peru, had a meeting with Gustavo Bobbio, the defense secretary. Kenna promptly criticized Castillo’s decision to criticize Congress in a tweet disregarding diplomatic protocol.

Within hours, the military and police leadership in Peru released a unified statement pledging to “defend the constitutional order” and calling on Congress to swiftly impeach the President and issue an arrest warrant. The Joe Biden administration quickly recognized the incoming administration. As anticipated, the European Union rapidly followed suit. Furthermore, on the same day, Congress removed him as President and called his move to dissolve a coup. According to Eduardo Gamarra, a professor of political science and international relations at Florida International University says, “Peru’s Congress can remove the president and the president can dissolve the Congress, so technically, it is not a coup.”

He was arrested and is in prison now. Pedro Castillo acted as his congressional adversaries prepared to make a third attempt to have him removed from office. Two earlier attempts to impeach were already taken.

The media, both domestically and Western, has been quick to spin a story that justifies the takeover and Castillo’s successor’s leadership, even using it as a chance to “restore faith” in Peru’s institutions. For example, the New Yorker called Castillo’s administration the “world’s shortest-lived dictatorship” while declaring that “the rule of law … was strong enough to stop a single desperate man”.

The US violates Latin American Sovereignty Yet Again

The actual ‘coup attempt’ was carried out by the US embassy. A month before his overthrow, Pedro Castillo had requested protection from “a new type of coup d’état” in a letter to the US-dominated Organisation of American States.

The rich natural resources of Peru, including copper, zinc, and silver, are something that the US will do anything to reclaim control of. China is currently Peru’s largest trading and commercial partner.

Most Peruvians have disregarded Western propaganda and recognized the US-backed coup for what it is. Protests have grown and spread across the nation after an initially subdued response.

Former Honduras’ President Manuel Zelaya who was himself overthrown in a US-backed military coup in 2009 has condemned the US-backed coup against Pedro Castillo.

Bolivia’s former President Evo who was overthrown in a US-backed 2019 coup said the coup shows “yet again that the Peruvian oligarchy and the US empire do not allow leaders from unions and Indigenous nations to rise to the government to work for the people.

The coup against Pedro Castillo is a perfect example of how the US continuously violates sovereignty in Latin American countries to plunder their resources.

What is the probability of making an even number? Explanation