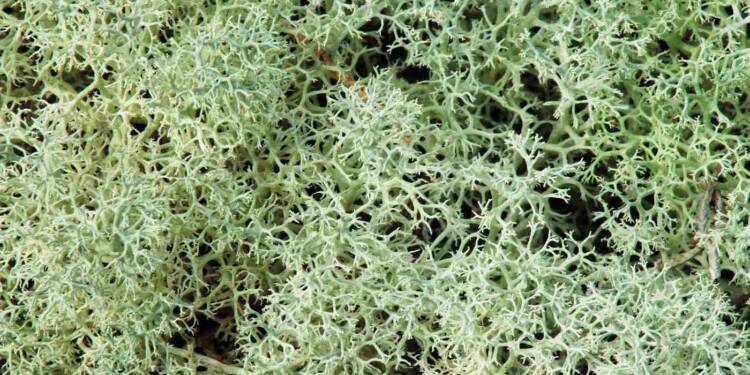 What is Reindeer moss?

Reindeer moss is neither a plant nor an animal. It’s a fungus! This fungus is essential for deer survival, growing in both warm and cool climates in open, well-drained environments. Reindeer moss, reindeer lichen, and caribou moss are the different common names for Cladonia rangiferina, a lichen which belongs to the family Cladoniaceae. This lichen is only a moss in appearance: it looks like a cross between a fungus and an algae. You can recognize it by its unique shape as its branches are in a way that resembles deer antlers.

This lichen grows very slowly up to half inch per year until it reaches a maximum height of 4 inches. It usually forms mats covering large expanses in boreal forests, but can also grow in warmer climates. This fungus is called reindeer moss because it is an essential part of a reindeer’s diet. They eat this lichen year-round, except when snow covers the ground, forcing them to seek different sources of nutrition. Moss is not necessarily poisonous, but its high acidic levels mean that humans will experience severe discomfort after eating it.

It can sometimes grow in warmer climates, with reindeer moss typically thriving around the Arctic Circle in areas where other vegetation types cannot survive. It is quite common in the Canadian boreal forests and the Scandinavian tundra. It can also live in the heaths and moors of the UK. This lichen prefers moist open forests and well-drained, acidic soils. It is one of the most cold-hardy organisms in the world and can survive for thousands of years on air humidity alone.

Also Read: What is meant by Limiting Friction? Explanation and Definition

Natives have used this lichen in cuisine for centuries, either eating it raw or adding it to a prepared dish. Some traditional dishes made from reindeer moss are:

Lichen acts as a thickener in soups and puddings. Some people report that raw moss has a bitter taste that resembles mushrooms or aspirin, but it makes a nice addition to the aromatic scent. Interestingly, it was also a key ingredient in a very popular Swedish alcoholic drink in the 19th century. Lichens were used as a substitute for cereals, which proves the versatility of this organism in food.

In the past, people used moss as an ornament to decorate living spaces and gardens. Today, it is becoming increasingly popular in interior design through organic furnishings that make use of the lichen’s appearance and recently discovered noise-absorbing properties.

Reindeer moss could save your life if you find yourself stranded in the Arctic: It can provide warmth, shelter, and nutrition. The natives of Scandinavia used reindeer lichen to stuff their huts and beds, as it provided some insulation from the cold.