Trudeau’s soul sister is gone! Is the Canadian PM next? 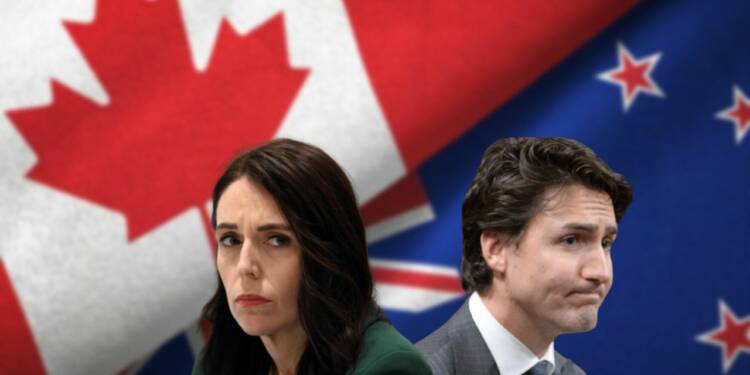 The liberal elites of the globe were left aghast as New Zealand’s PM Jacinda Ardern announced her resignation. The liberal queen’s sudden exit has made the Kiwis overjoyed with happiness. But in Ottawa, Prime Minister Justin Trudeau is real difficulties because, if you look at the similarities between Justin Trudeau and Jacinda Ardern, you will see how closely the two leaders connect to troubles.

Immediately after Jacinda Ardern announced her resignation, Canadian PM Justin Trudeau tweeted his sympathy on her departure from office.

Thank you, @JacindaArdern, for your partnership and your friendship – and for your empathic, compassionate, strong, and steady leadership over these past several years. The difference you have made is immeasurable. I’m wishing you and your family nothing but the best, my friend. pic.twitter.com/72Q5p9GZzg

The tweet isn’t surprising considering, Jacinda Ardern was Trudeau’s closest ally in championing liberal and progressive causes. When she first came to power, Jacinda Ardern was labelled as a Messiah of Liberalism, just like Justin Trudeau. Both of them also come from WEF (World Economic Forum) and have occasionally supported each others’ actions.

Echoing Trudeau’s action, Jacinda Ardern also imposed measures to surveil social media and curtail criticism of her government. The project was a part of a set up that was introduced in the wake of the mass killings by a white supremacist in Christchurch in 2019. Jacinda Ardern also used his RCMP (Royal Canadian Mounted Police) on protesting truckers who wanted all Covid-19 restrictions to be removed just like Jacinda Ardern in New Zealand, whose administration hounded dissenters for calling to end ‘pandemic’ restrictions.

Now, that Jacinda Ardern has to step down, several Canadian critics are stressing that Trudeau’s end is also nearing. As per a recent Nanos poll, Conservative leader Pierre Poilevre has a 7% lead against Trudeau. Like his soul sister, Trudeau has recently become unpopular as one of Canada’s least liked politicians. Trudeau’s issue isn’t even with Pierre Poilevre; his head is literally covered in clouds of troubles as a result of his poor governance.

Canadians today are finding it difficult to survive as food, petrol, and rent prices have surged across the nation. The economy is not in a good shape either. In addition, the energy sector is left at standstill because the Liberal party’s green agenda is taking away all the attention.

There is also a rebellion going on within his coalition government. While his former Finance minister, Bill Morneau is attacking Trudeau for being an incompetent leader, Jagmeet Singh, the coalition partner of Justin Trudeau is also dreaming of becoming the next PM real soon.

Justin Trudeau has far too many issues, all of which are caused by enemies he has made for himself. Now he is powerless to change it. Jacinda Ardern gave in to her opponents because she was aware that it was game over for her. Will Justin Trudeau understand his fate the same way Jacinda did? He has to, because that’s the only way through which he can come out of all of his mishaps.