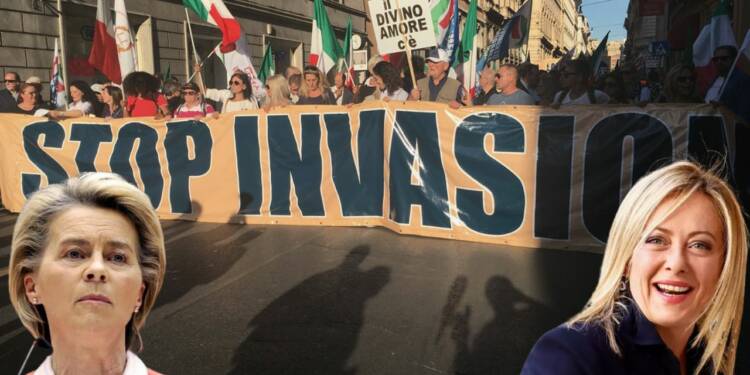 Sovereignty is the right of every state in this world but sadly, the most prominent so-called “advocate of perfection”, the European Union is a contradiction to its very founding principles. EU was established in a bid to maintain peace and stability among the European nations and yet, it is turning out to be another authoritative organization with Italy becoming its latest target.

Italy has recently, forced asylum seekers and illegal migrants seeking shelter in Europe to relocate to Greece. Nationals from Afghanistan, Syria, Iraq and African countries have been stopped at Italy’s border and sent back. The Mediterranean nation holds the authority to return migrants and refugees who arrive in the country without documentation, under the terms of a 1999 agreement, it reached with Greece.

The current leader of Italy’s right wing government is Giorgia Meloni has already made her name for anti-immigration politics. She has attracted the ire of the power holders in Brussels for her strong words on the illegal migrants arriving on the shores of Italy daily. Needless to say, Meloni enjoys widespread popularity for echoing the sentiments of millions of her countrymen.

The practice of Italy returning migrants who have been intercepted in Greece, has been the subject of criticism for years. Anytime soon, the European Union can respond with sanctions. Previously, the Union responded with sanctions on Poland and Hungary as well, on the pretext of acting on illegitimate allegations, that the respective governments’ were being authoritarian and undemocratic. Rather, it is the EU that is turning authoritarian, with its constant interference in the internal matters of sovereign nations. The supranational organization is a regional bloc that has now been reduced to operating on the diktats of France and Germany. Other European nations, which enjoy less power within the union, are often bullied into accepting its conditions.

Infiltration into Italy has multiplied because of the immigration policies of EU. Terrorist attacks have become a common occurrence with violent crimes skyrocketing across Europe. It must not be ignored that illegal migrants pose a great threat not just to Italy but to the whole of Europe. Italy is doing whatever it can to protect its borders and act in the best interests of its sovereignty. Allowing thousands of undocumented migrants, from war hit nations, enter into its territory illegally, has proven to be disastrous for Europe.

Read More:European Parliament should be abolished

Italy serves as a port for migrant arrivals in Europe. By securing its borders, the nation is not only defending itself but also acting as a defense against the destruction of peace in entire Europe. Despite the efforts of the Meloni government, if the European Union continues to act in such ignorance then, the day is not far when Europe will turn into yet another Middle East.