Stage is set for a US Russia Collision 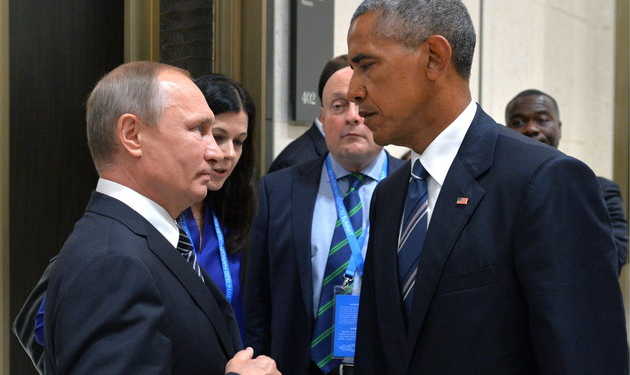 In the Middle East, Russia and US are the elephants and Syrians are the pasture which is suffering.

The cease-fire in Syria that the United States and Russia tortuously negotiated has, like the one before it, fallen apart. Both countries, Russia is fighting on behalf of Assad and the United States to some extent against the Syrian regime, have repeatedly accused each other of violating international laws.

The U.S. Says Russian and Syrian aircraft have targeted primarily rebel forces and civilian areas in Syria, where several hospitals have been bombed and a United Nations aid convoy was hit. Last an American airstrike killed some 60 Syrian government soldiers and Russia has accused the U.S. of igniting World War 3 by deliberately killing Syrian troops and aiding ISIS terrorists.
The US has broken off ceasefire talks with Russia and recalled its negotiators from Geneva. Russia, meanwhile, has suspended an agreement between the two nations on cleaning up weapons-grade plutonium, setting conditions – including an end to Ukraine-related sanctions – for the recommencement of the accord.

The Russian government has set in motion a nationwide civil defense training exercise to ensure the country is properly prepared in the event of a nuclear, chemical and biological attack from the West involving at least 200,000 emergency personnel and the co-operation of 40 million civilians.

On the other hand, top US Generals and officials are warning Russia against a full blown out war. Though in reality a full-blown war looks a remote possibility.

The Russian state is accused of trying to influence the outcome of the US presidential election by breaking into US servers to manipulate the vote count and of attempting to divide and weaken the European Union. Obama lately is trying to project a more aggressive posture in order to help Hillary Clinton in the US presidential elections.
Trump made a point that he’d attempt to collaborate with Russia in a war against ISIS and this will drop his ratings even further among the patriotic Americans as Russia is viewed as America’s number one enemy by them.

The aggressive stand by U.S. gives a strong message to Saudi Arabia and it’s other Gulf States that the US is still there and much relevant irrespective of advances made by Russian forces in the region.

In the instance of Russia, it sees the continued expansion of NATO a real threat. Russia has clear goals, it is looking to shore up the Assad regime and maintain their port and Air Base Access to the Middle East and East Mediterranean, and they really are close to achieving this and are helped by a historical (since 19179) enemy of the US, Iran.

Russia along with Iran has created a successful coalition in Syria. Iran is attempting to become a major regional player and Turkey is its main competitor. As Turkey is a NATO member and EU aspirant, Russia is in a coalition with Iran against Turkey.

The assertion that Russia has been the primary contributor to the Syrian anti-terror campaign and did not let it slip into the hands of the Islamic State is raising Russia’s stature on the world stage. Russia and especially Putin craves for international respect and recognition of Russia as a world power.

Goals of US and Russia are totally opposite in Syria, former wants regime change and later back the regime. Syria is more extensive than just a Cold War conflict, with many different proxies like Turkey, Iran AND Saudi Arabia involved, and loyalties shifting to and fro; it is also narrower, in the sense that the only settlement that will stick must be acceptable to the people of Syria and various ethnic communities who live there.

For any ceasefire in Syria to endure, let alone any settlement, either many more parties will have to be involved as sponsors, including Iran, Saudi Arabia and Turkey or the Syrians themselves will have to call for a stoppage of the civil war. That may not happen until there is a victor and in the current situation, there are no winners.

From US-Russia tiff a harsh and saddening reality emerges: There is no productive solution on the horizon to end the Syrian conflict. All parties to the conflict continue to pursue competing military strategies and quest after their own political agenda.

With no other military or political initiative currently on offer, the conflict will nestle back into a disastrous stalemate. In the space of more than 2,000 days of crisis hundreds of thousands of people have been killed and half of the country’s population has been driven from their homes.

The destruction of hospitals has suddenly become the new normal. Families huddle together in a single room of their Aleppo homes, choosing to die together than apart. Images of dazed and bloodied children sitting alone in the backs of ambulances or lying face down, drained on the beaches spark brief moments of soul-searching among us.

The Syrian crisis is a test of our common humanity and global values, and it is one that we are failing.

So far, the Americans and the Russians have proved incapable of ending the warfare. However, if they do not come to blows in the weeks and months in advance, they may eventually find themselves back in the negotiating room at some point. Moscow and Washington cannot make peace in Syria by themselves.

But in reality, a settlement is impossible without them. Although it has fallen apart, the next step, unsatisfying as it may be, is to try again.

Nawaz & Raheel: Tug of War between both Sharifs