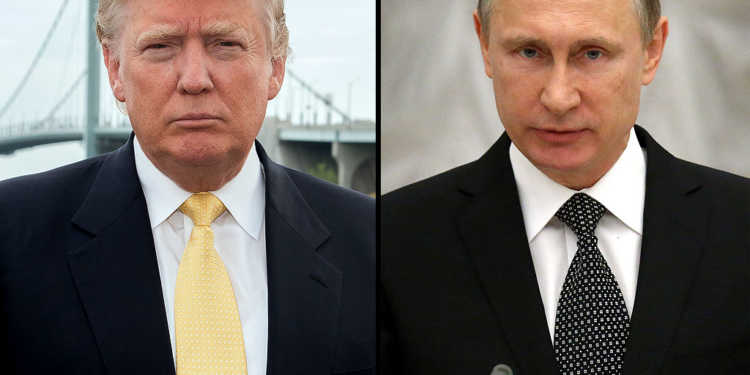 The dust hasn’t settled over Trump ’s victory as yet, and even now liberal mobs are rioting across America- burning cars and attacking hapless pedestrians. And while reports are still uncoordinated, it appears Republicans are responding in kind. Already an NRI has reported being verbally abused in California- ordinarily the heart of American Liberaldom. This was not unexpected- as ‘model minorities’- well-educated, politically irrelevant, high tax-paying, easily threatened and meek technocrats, Indian Americans have always been the easiest targets for American thugs- be they Republican or Democrat, Black or White.

Yet in the greater scheme of things, India- and the World- is much better off.

Clinton’s defeat- and this term is far more than ‘Trump’s victory’- has one simple repercussion: No World War III. No conflict with Russia. No tanks streaming across the Fulda Gap. No nukes flying across the skies. No threat of Human extinction.

Already in TFI, we have outlined parts of the great Saudi plan to create a great safety net for when the oil runs out. This massive financial-infrastructure plan hinges upon four basic nodes:-

This massive industrial complex is meant to transfer oil from Africa to refineries in the Gulf to markets in Europe. On the other hand, it will also ensure the flow of investment from the Gulf to Africa- both enriching the Arabs at the expense of the Africans as well as ensuring Wahhabism is exported into the very heart of African states like Ethiopia, Kenya, and Sudan.

In addition, this pact is meant to weaken Russia- by reducing European dependence on Russian oil and gas and driving Arab money into Muslim enclaves in Europe such as Albania and Dagestan.

It goes without saying that the attacks on Russian allies such as Gadaffi- the foremost champion of the African Union- and Assad- a secular socialist and enemy of Wahhabism- are part of this vast blueprint. It is likely that the attack on Saddam Hussein- another foe of Wahhabis- was part of this pattern as well. (Readers must remember that Trump was fighting both the Democrats as well as the Republican Party Elite at once).

Hillary Clinton has long been an associate of the Wahhabi powers- as clearly proved multiple times by organizations such as WikiLeaks. Only recently was the disclosure made that both Clinton’s election campaign and ISIS were funded by the exact same donors.

This relationship is very old; over 25 years ago- the Clintons aided Wahhabis in funding Islamists in sparking off a Civil War in Serbia, a Russian ally- which led to the creation of Kosovo. Under the guise of humanitarian operations, NATO funded both NGOs and Military forces- killing thousands of Serbians and draining the country of wealth. As a result, Kosovo- once the heart of the Serbian Empire (just like the river Sindhu was once the heart of Hindu India) – was carved out and handed over to Muslims secessionists. The NATO excuse for invasion- that war crimes were being committed- were later proved false as the Serbian leader Milosevic Slobodan was finally exonerated of charges of genocide by the International Criminal Tribunal for the Former Yugoslavia (ICTY) in The Hague, years after his death in prison. This is not an isolated incident; the Georgian war and the Ukrainian war were both started when NATO funded neo-Nazi takeovers of their governments. (Readers will remember that Nazi ideology also includes the genocide of Slavs- such as Russians).

Clinton’s victory would have meant a similar situation happening in Syria- and by extension, Iraq and Turkey today.

Every single Shia and Christian between the Mediterranean and Iran would have been slaughtered. Every single Kurdi, Druze, and other minorities would have been enslaved. Terrorists in Kashmir, Kerala, Bangladesh, Chechnya, Afghanistan, Turkmenistan, Mali, Xinjiang, everywhere in the World would have been flushed with money and guns. ISI and ISIS would have had more funds than ever. NGOs would have flooded into India and puerile morally-bankrupt cries of ‘Human Rights’ and ‘Secularism’ would have rent the skies with their demands for the destruction of Hindu cultures. Sanctions on India, Russia, and China would have stifled our economies. And then the Nukes would have started flying.

It won’t be an exaggeration to say that with his victory- Donald Trump, inadvertently, has already saved the World.

The danger is not past yet. NATO has been militarizing the Russian border on a scale unseen since the days of Reagan. The US has stationed thousands of troops in hidden caves in Norway. But with Trump’s pacifism towards Russia and focus on internal security- with emphasis on Islamist activity, it is likely that tensions will de-escalate. In addition, Trump’s victory will embolden ethnic-nationalist movements in Western Europe which, by their nature, are anti-liberal and thus, anti-Nazi. (Readers must remember that the term ‘Nazi’ literally means ‘NATIONAL SOCIALISM’; contrary to popular thought, Nazism is a liberal, left-wing ideology). This will further de-escalate tension in Europe.

Already there is evidence of increased Russian confidence in the American situation. For weeks, the Russians have been avoiding major action in Syria- but within moments of Trump’s victory and even though he won’t take power for months, Russian fleets were moving to strike terrorists in Aleppo.

Contrary to what he has said in his speeches, Trump is unlikely to repeal the Iranian Nuclear Deal- even less so if his bonhomie with Putin, an Iranian ally, continues. It is far more likely that Trump will use his threat as leverage to force more tenable terms from Iran in the Syrian and Yemen wars- including aid for Assad and for the Kurdis. This will, naturally, weaken the Turkish position and drive them even further from the Wahhabi states. (Readers must remember that Erdogan, while a devout Muslim, is not a Wahhabi as Turks are not wannabe-Arabs like Pakistanis).

Pakistan is a defacto Wahhabi state. While Hindus remain the most hated group to Pakistani Sunnis, Christians and Shias come close after us. It is thus, in India’s interests, to push for the weakening of the Wahhabi superstructure. The best way to accomplish this is three fold.

This is where Trump’s policies with respect to China will aid us as well.

It is unlikely that Trump will repeal the Trans-Pacific Partnership (TPP) agreement- though it’s obvious that his administration will not be ratifying it, barring a sudden 180 degree turn from what was one of his key positions throughout his campaign. In addition, his repeated calls for demilitarization of NATO and the East Pacific would put greater pressure on both Japan and South Korea to remilitarize their militaries.

But simultaneously, Shinzo Abe has staked a lot of his political acumen and economic reforms on the success of the TPP. In addition, Pacific states like Vietnam and Taiwan would be adversely affected by the sudden policy reversals a Trump Presidency would entail. This is where India should- and under Modi, is capitalizing.

Trump’s victory should also ensure that Indians remember its key over-arching feature: the importance of National and Civilizational Pride.

Trump’s victory, for better or for worse, was a victory of traditional American values as defined by men like Emerson and Washington: Self Sufficiency, Small Government, Self Defence, Isolationism, and Common Law. Like all values, these would be exploited by bigots- but this should be no reason of doubt of their inherent vitality.

A weak State is not a State at all, but a massive joke. An India where guns are secreted into colleges inside the Capital, an India where journalists can leak state secrets to enemies on national media, an India where hundreds of thousands of people of a ‘particular community’ carry out funeral marches and riot in the name of executed terrorists, an India where ivory tower academicians call for the murder of innocent tribals who merely wish to be left alone by the Maoists in the latter’s feud with the Republic, an India where the mere mention of a Unified Civil Code is enough to bring all sorts of dilettantes and murderers onto the streets- is not a real country, but a massive joke.

A Clinton victory would have chained India to permanent defence. A Trump victory- even despite the fact that the man is an unpredictable, aggressive, careless braggart- ensures that India has a fighting chance at achieving domination of, if not Asia, then at least the Indian Ocean. This would be a feat which would require total devotion from all Indians- and from the orderly manner of how most have dealt with the demonetization, this is possible.

And why stop with that?

Tamils and Kannadas must come to an agreement on Kaveri. Punjabis must work on the drug menace. Bengalis- difficult and daunting and unlikely as it is- must deal with the illegal immigrants. Moderate Muslims must speak up in support of UCC. Delhiites should learn to elect someone who’s not totally hopeless (Readers must remember the good times under Sheila Dixit). All must reject the depredations and schemes of predatory and illegally-funded NGOs.

Otherwise it is evident that India, with or without Modi, would have no place in Trump’s brave new World.

A Desi Trump fan tears into the Never Trump brigade