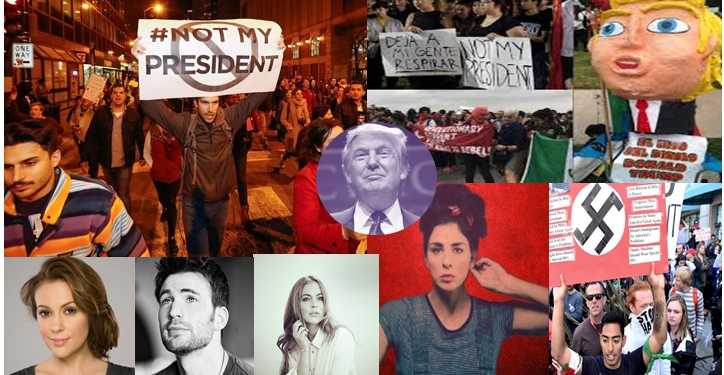 Because it’s him that has broken the glass ceiling – an outsider crashing into the party of Washington insiders rotating power among themselves.  Someone who calls spade a spade, who points out that the emperor is indeed naked, someone who speaks for the forgotten people, someone who’s not backed by corporate and lobby interests. Sure, he’s largely a failed businessman, but Hillary Clinton is a failed politician in a failed system. She’s no Margaret Thatcher or for that matter even Theresa May. She’s the wife of a former president, who’s record is often glossed over by leftist media, and we all know very well that a politician’s wife or children wanting to fill up his vacant place isn’t democracy, its kleptocracy, it’s the stuff banana republics are made of.

He’s dealt a deafening blow to the mainstream media’s credibility.

And he’s made it evident how out of touch of reality the progressive leftist upper class is; this includes not just the media but the entire metropolitan urban upper middle class and the various colleges whose campuses are left dominated.

Something the mainstream media had termed as a cake walk for Hillary Clinton. Right from Clinton’s second term as president, the media had anointed Hillary Clinton as the first future woman president and the even then serving president as the future “first gentleman”.  With all the backing of the Wall Street, the corporate lobby, the weapons lobby, the media and special interest groups, this was her election to lose. And she lost. By a rich playboy who had taken up politics as a hobby just two years ago.

It is actually the last eight years of Obama that have created the rise of Donald Trump. Obama came up riding on the wave of anger with the Republicans who had heaped two wars and a recession in eight years on the country.  He promised to cure everything, but did nothing but play safe, just like any other career politician. He’s done nothing for even the black community from where he comes, forget about other groups. He’s made America much less relevant, and much worse than when he first came to power. Racial tensions are at their worst and as this election shows, the country is deeply divided.

The last three presidential terms were by a sexual fiend, a war mongering halfwit and a smooth talking incompetent. So, stop pretending that America has fallen into a hell hole the moment Trump was elected. It has been there for quite some time.

But the left is never known for introspection. Immediately, the filth began to roll:-

This one straight calls half the voters as uncouth waiting to molest women:-

Whipping up the race victimization frenzy:-

This one looks more like praising the chaos than reporting on it:-

And how could the celebretards be left behind? :-

world will never be the same. I feel Sad for the young.?will never be more than the toilet, I’ve used as a symbol 4 Him.
U Can’t Polish ?

"The next wave of fascism will come not with cattle cars and camps. It will come with a friendly face." – Bertram Gross, "Friendly Fascism"

I am in tears

America, you have failed. What the actual fuck. Devastating. I won't recognize @realDonaldTrump as our president, ever. #dumptrucktrump

Is it possible that this country is more sexist than racist? May God help us all.

Rest can be found here:-

And to speak of the college educated out of reality public-

So this is the future generation, who can’t accept that the opinions from the other sections of society matter too, and that people from every strata of the society need to have their vote do the deciding Another liberal hypocrisy , of people wanting a classless society caring nothing about the opinions of someone outside their circle. If these students can’t take losing an election, they need to go back home and let their mothers nurse them, because that is how infantile they are.

Some of whom have taken to the streets for rioting, along with the other freeloaders who constitute a huge chunk of the liberal voter base:- Top: An upside-down flag, which is typically reserved for military distress signals in times of grave danger.

Below: Burning the same flag which you think is in distress.

Make up your minds, clowns. Some glimpses  of the anti Trump protest:-

Liberals have absolutely lost it. On media, at businesses, in colleges, and now on the streets nationwide. So, it’s totally acceptable for liberals to call out for killing of the rival candidate and destroy public property as per the liberal media  that is doing a great job fanning this, but its racist and facist if someone calls out their BS. All this chaos is being whipped up into a frenzy by a media desperate to further demonize the GOP candidate into losing to the unpopular and flawed Hillary Clinton, her supporters are not ready to accept that not everyone shares their twisted views, and America can’t be run by their logic.

Because there is no bigger hate monger and intolerant than a liberal. There is no group bigger than liberals who keep racism alive and even fan it for their own sustenance. There is no bigger morally deprived people, no bigger egoists who never care whether their plans work or not, as long as they are so very safe from the chaos and violence caused by their policies. No one hates the working class more than the liberals, and that’s why they are at the forefront demeaning the working class , or whoever doesn’t have some fancy degree.

To liberals, tolerance is, by definition, whatever their opinion happens to be. So, to be tolerant, you have to agree with them.

People who don’t even know what tolerance is shouldn’t be lecturing everyone else on the subject. Liberals talk incessantly about tolerance and yet they lash out whenever anyone dares to present a view that doesn’t toe the liberal line, even assaulting them if necessary. In short, they are hate filled people who accuse their opponents of behaving the way they do on a regular basis.

And they destroy the societies they live in, by using minority against majority &  propping up hate groups by pinning victimhood on them, stall every social reform or economic development as they thrive in misery , They have no qualms about bringing the worst kind of people from beyond their borders just to break the social fabric of the majority and create their own voterbase. The result is seen today by the glorious rioting scenes all over post this election. Lesson for India:- The likes of CNN and Huffpost  is what happens when you don’t nip weeds like NDTV and Scroll in the bud.

Imagine the opposite, imagine if, that after Obama got re-elected in 2012, republican voters had smashed some cars and beaten up some people. She lost. Because now public patience with the establishment and its favourite children is running out. Because people were aghast that their next president to be a self-appointed women’s rights champion was funded by regimes who had the worst record against women’s freedoms. Because one cannot just wish away the 33000 deleted emails( remember, Nixon got removed from presidency for Watergate, and deleting 18 minutes of Watergate tapes made his position much worse), the shameless embezzlement of money meant for charity (Haiti’s curse has hit you hard, Hillary) and other purposes via Clinton foundation, arming jihadi groups to fuel more wars for the weapons and oil lobby and destroying two secular regimes as well as two countries in the process, wanting to flood the country with Syrian “refugees”, bringing ties with Israel to an absolute low, plans to expand Obamacare into a Government-Run, Single-Payer System, fighting voter ID laws as being racist (as the dead vote democrat in awesome numbers), the list goes on..

This is Hillary’s record, in the simplest language:-

As an Indian, I’m no fan of the Republican party either. Its hijacked by bible thumping lunatics (just like the Democratic party by the left), has given some horrid presidents who wrecked havoc in their country, as well as rest of the world,the latest two examples being Ronald Reagan and the Bush father & son. Both the Democrat and Republican party in the long run have been bad for India . But in the more recent times, it has been the like of the Democrats like Clintons who have been promoting vested interests in India and encouraging anti India lobbies. Donald Trump wont be great either, but he’s lesser of the two evils, and looking at the lows of Indo American relations right upto the late 1990s, even that is a relief.

Lastly, to the Indian Americans: – American policies against India have always been on the adverse side. Try to change that by being a bigger political force, and not merely by bragging about your perfect life to your relatives back home. Please don’t vote merely who will provide H1B visas, vote for the politicians who are willing to change this.