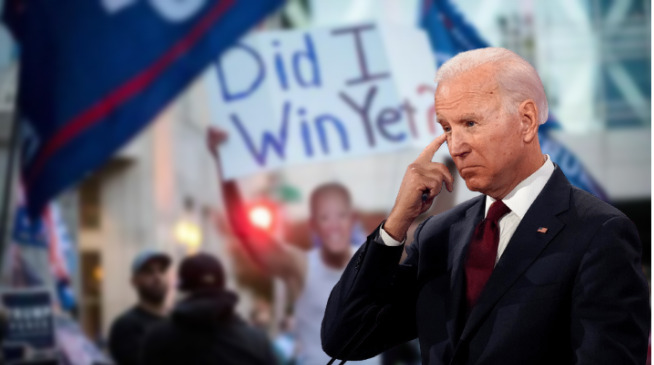 Economic stagnation, rising inflation, petrol and gasoline prices hitting the roof, children being taught woke nonsense at schools, an unending illegal immigrant crisis along the southern border, an ever-more belligerent China, the threat posed to global peace by Joe Biden’s indecisiveness, Biden sleeping off and farting during the recent climate summit in Glasgow – frankly, Americans have had enough of the man.

Now, they just want to get over with his presidency. Who can forget the botched-up withdrawal from Afghanistan, which really, was an abject surrender to the Taliban? Joe Biden messed up big time on that count. Americans have not forgotten how they were internationally humiliated due to the ineptitude of their President.

It is becoming clearer that the Biden administration, in less than a year of its inauguration, is well on its path of becoming the most hated government, the United States has ever had. Not only do Republicans, MAGA supporters and conservatives at large despise the Biden-Harris duo, Democrats too are anything but happy with their governance.

So, we predict a ‘Bidexit’ (Biden-exit) taking place soon, where the President could either be impeached – paving way for Kamala Harris to take over the reins, or the things can go even worse for Democrats.

Inflation at a 30-Year High!

The US inflation data showed that the consumer price index (CPI) rose to 6.2 per cent in October — a 30-year high on a year-on-year basis. The numbers were well above analysts’ expectations. According to data released on Wednesday, the core Consumer Price Index (CPI), rose 0.6% in October.

The 0.6% monthly core CPI growth is higher than the 0.4% increase that economists predicted. According to Axios, economists predicted that the headline measure would come in at 5.8% over the last year, with core CPI up 4.3% for the year. Fuel oil prices increased 12.3% in October; up from 3.9% in September. Prices for new vehicles rose by 1.4% in October, while those of used vehicles increased by 2.5%.

Commodity prices are beginning to climb a steep ladder, and the American public is getting infuriated at how the Biden administration is doing nothing to resolve the impending crisis. Travelling is about to get very expensive as the festive season kicks in and people begin travelling to their homes to spend time with families. Yet, the surging prices might just prevent Americans from even meeting their families, since the Biden administration has made travel a luxury that only the rich can afford.

Joe Biden is testing the patience of American citizens. He is ramming Congress with his extravagant climate and infrastructure plans, all while doing nothing about inflation that could reduce all his spending capabilities to dust. According to a CNN poll, 58% of Americans say President Joe Biden has not paid enough attention to the nation’s most important problems, as a majority disapproves of the way he is handling his job as the President.

As Biden messes things up pretty badly, Donald Trump is gaining political numbers. A series of polls this week have shown that Joe Biden would lose the US presidency to a resurgent Donald Trump in 2024. A poll from Suffolk University released this week showed Trump four points ahead of Biden, 44-40. Meanwhile, an Emerson poll shows Trump ahead by a single point, 47-46. A Grinnell College National Poll shows a 40-40 tie.

Usually, when people are appalled by the way their country is being run by the government, they wait for elections and decisively throw the rulers out of power on polling day. That is what happens in a democracy. Under Joe Biden, however, the United States could stare at a food and essential commodity crisis. The staggering inflation figures have made it clear for Americans that Biden is up to no good. So, Americans must soon decide whether they want the crisis to strike them and destroy their lives, or whether they want to stand up and do something to save their families and nation.

If they do decide that something must be done, Biden will likely get evicted out of the White House. But the person set to replace him is no different. She might even turn out to be worse, and Americans have made their opinion of her very clear.

Kamala Harris – A Disaster in Waiting

Speaking of Kamala Harris, her approval ratings have nosedived to 28%. A 51% majority of respondents said they disapprove of the job Harris is doing as the Vice President. At this early stage of a presidency, Harris’ numbers in the USA Today/Suffolk poll are really unprecedented. The Los Angeles Times’ polling tracker shows that Harris is more unpopular than Mike Pence, Joe Biden, Dick Cheney and Al Gore were at this point in their respective vice presidencies.

So far, Kamala Harris has failed at all jobs which she has been tasked with. The biggest failure, however, has altered the United States’ national security as a whole. Within the White House, she has been accused of fostering an abusive and toxic work environment for colleagues and subordinates.

Joe Biden tasked Kamala Harris with resolving the southern border crisis and stopping the flow of illegal immigrants into the country. Instead, she thought it was a good time to go ‘woke’ and for a vacation, which is why she embarked on disastrous tours of Latin American nations. The border crisis has not been solved, and Americans are outraged at how inept Kamala Harris has proven to be at her largely ceremonial job itself.

Joe Biden, though, faces the prospect of being impeached very soon. Kamala Harris might be a disaster as well, but that is an issue which Americans will deal with once Biden is out of office. Joe’s BIDEXIT will become a lesson for democracies around the world – never let the media guide your decision at the ballot.