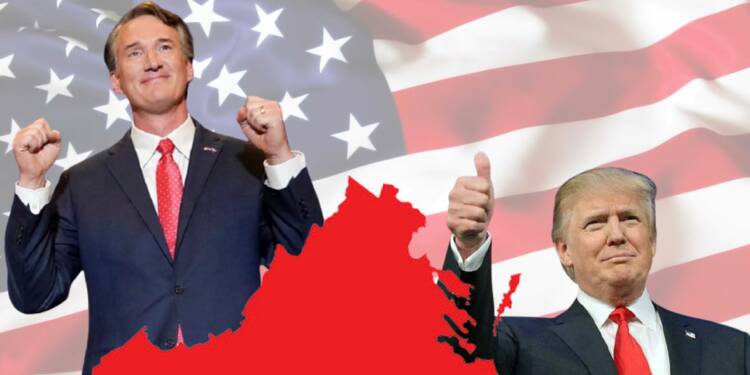 The Republicans have scored a spectacular victory in the state of Virginia. Now, Republicans are about to occupy all three major offices in what has been called a traditional blue state. Virginia, after the recent elections there threw up surprising results, is all set to have a Governor, Lieutenant Governor and Attorney General who are all Republicans. Republican Glenn Youngkin defeated former Democratic Governor Terry McAuliffe in the gubernatorial race in Virginia. The results in Virginia promise to have nationwide implications, as the Democrat candidate was largely expected to win the Governorship in the state. That he did not, is quite a statement on the presidency of Joe Biden and the disapproval which Democrats are now facing.

Youngkin, a first-time candidate who hails from the business wing of the GOP, ran a disciplined campaign, focusing on taxes, crime, and holding public schools accountable to parents. Joe Biden had, in 2020, won the state of Virginia by 10 points. Now, for Virginia to so emphatically dump the Democrats will surely send shivers down the spine of the Biden administration.

Donald Trump made the difference in Virginia:

The Republican Party was not expected to score a victory in Virginia. Yet, it won by a margin which promises to change the very political colour of Virginia from blue to red. According to former President Donald Trump himself, the GOP gave up on Virginia too early. Yet, what made the win possible for Republicans in Virginia was the endorsement given to Glenn Youngkin by Donald Trump.

Former President Donald Trump said Democrats put him “on the ballot” in Virginia, saying they “played it wrong.” Speaking to Fox News, Trump said, “If you look at what happened in Virginia, it’s very interesting. They used my name — the Democrats — so much that they ended up losing. One of the reasons [McAuliffe] lost is because he kept saying Trump, Trump, Trump.” The former President added that Youngkin called him the morning after the election and “really thanked me because he understood the importance of what we did.”

Even Joe Biden seems to agree with Trump, as he sought to dissociate himself and his administration from the humiliating and unexpected loss in Virginia. Biden argued that the miring of his legislative agenda in a Capitol Hill logjam did not sway the outcome. He also said that the loss in Virginia was not a verdict on his presidency. Instead, he said, “…I’m not sure I would be able to have changed the number of very conservative folks who turned out in the red districts who were Trump voters.”

But, it IS a verdict on Biden’s presidency!

A series of polls this week have shown that Joe Biden would lose the US presidency to a resurgent Donald Trump in 2024. A poll from Suffolk University released this week showed Trump four points ahead of Biden, 44-40. Meanwhile, an Emerson poll shows Trump ahead by a single point, 47-46. A Grinnell College National Poll shows a 40-40 tie.

Also read: A new poll suggests that Donald Trump will defeat Joe Biden if the two men go head-to-head in 2024

Speaking of Kamala Harris, her approval ratings have nosedived to 28%. A 51% majority of respondents said they disapprove of the job Harris is doing as the Vice President. At this early stage of a presidency, Harris’ numbers in the USA Today/Suffolk poll are really unprecedented. Meanwhile, according to a CNN poll, 58% of Americans say President Joe Biden hasn’t paid enough attention to the nation’s most important problems, as a majority disapproves of the way he’s handling his job as President.

Economic stagnation, rising inflation, petrol and gasoline prices hitting the roof, children being taught woke nonsense at schools, an unending illegal immigrant crisis along the southern border, an ever-more belligerent China, the threat posed to global peace by Joe Biden’s indecisiveness, Biden sleeping off and farting during the recent climate summit in Glasgow – frankly, Americans have had enough of the man. Now, they just want to get over with his presidency. Support among Trump supporters is getting consolidated, while Democrats struggle to keep their house intact.

Also read: If elections are held today in the United States, Trump will beat Biden by a yuuuge margin

Who can forget the botched-up withdrawal from Afghanistan, which really, was an abject surrender to the Taliban? Joe Biden messed up big time on that count, and Americans have not forgotten how they were internationally humiliated due to the ineptitude of their President. Meanwhile, according to Politico, President Joe Biden and Chinese President Xi Jinping are expected to announce the reopening of consulates that were closed last year, after the then Trump administration realised that they were used for spying activities. This will really be the final nail in the Biden administration’s coffin. Cosying up to China will result in Americans throwing Biden out of the White House in 2024, or perhaps, even earlier.

One endorsement by Donald Trump has set the Democrats’ house on fire. Imagine when Trump contests the 2024 presidential elections! The scene then would be quite marvellous, as liberal democrats will run around for shelter, amid unsparing assaults by Trump and Republicans.