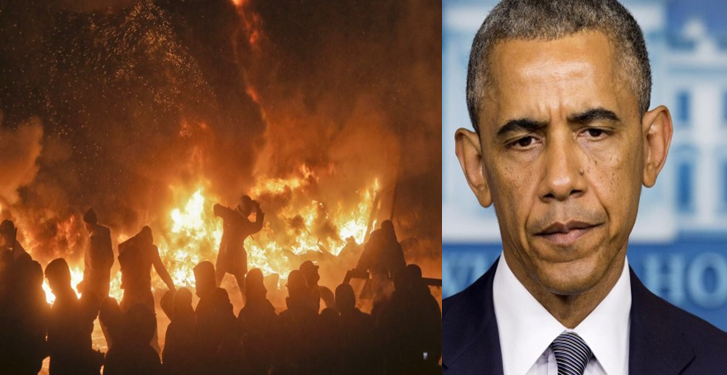 Posterity will not look upon Obama as the messiah of equality and liberalism as he- and liberals across the World- purport him to be, but as an equal of most degraded of Nazi collaborators of World War II. As he leaves office, we might do well to look back upon the eight years of his reign- and reflect on the utter and total incompetency and rot that has pervaded over the World because of him.

Of course- in many aspects, to compare him with the Nazis would be doing him a favour. The Nazi regime, at least in its first decade of power was almost synonymous with good governance and prosperous growth. Obama, on the other hand, leaves his nation with the worst race-relations in American history since the Civil War itself, crushing division within his society with a rural-urban split even we in India can scarcely comprehend, American universities run amok with juvenile liberals who demand cancellation of classes and have to provided with play-doh and puppies during study hours to ‘calm them down after Trump’s victory’, and the unprecedented disaster called Obamacare- which singlehandedly increased Healthcare inflation in the USA by at least twice and drove their already tottering Welfare system into the gutter.

Unfortunately, such reports often go unreported in the Liberal-controlled media of the World which holds tokenism and goodthink to be far more important than the Truth.

Obama is a darling of the Liberal media since he represents their facile view of Blacks- much like caste-centric liberals have done in India. This is to cover much the fact that seemingly ‘pro-Black’ Democrat policies- such as Affirmation Action and Welfare- have led to the destruction of Black society itself, as described in multiple articles and books by noted academics- such as Dr Thomas Sowell, probably the greatest American economist living. On the other hand- it were the Republicans who come out as the foremost champions of real equality- from the Civil War fought by the Republican President, Abraham Lincoln- arguably the greatest President the US has ever had- to the Economic Reforms under Ronald Reagan to Donald Trump’s promises to restore the ‘Inner Cities’ of America. If the article seems to be drawing parallels with the Indian Right, then rest assured these are intentional. In general, the Right across the World promises nothing but hard labour and equal benefits- such the RSS manifesto regarding Casteism; Liberals promise nothing but puerile attempts at ‘Social Justice’; Reservations benefit only the Elite, Subsidies usually led to Corruption, Caste Politics only lead to jewels like Laloo Prasad Yadav and his Chara.

TFI is under no such delusions- and thus, provides you the truth about Liberalism and its champions- in this case, Obama.

Indeed- it can be argued that the only sphere where Obama compares ‘favourably’ with the Nazi agenda- is in his Nazi-esque handling of Foreign Affairs.

The Obama administration has- as far can be ascertained- been involved in the funding of at least large-scale conflicts across the World- Ukraine, Libya, Syria, and Yemen– which have resulted in millions of deaths and billions in property damage. His continuation of the morally bankrupt alliance with Salafist states such as Saudi Arabia and Pakistan have contributed to global instability more than any other single factor in the past decade.

We at TFI have already exhaustively described the Yemen, Libyan, and Syrian Crises in several articles already. To recap- the heart of the three wars apparently lies in a massive Wahhabi plan to deal with a post-oil World. They aim to set up a massive chain of pipelines and industries from Africa to Europe- to economically exploit the African States, push Wahhabist ideology and dollars into both Europe and Africa, and subvert Russia- a major supporter of secular Arab governments like Syria and Gaddafi’s Libya. They are aided in this by European governments and, unsurprisingly, Obama’s administration. It has long been an open secret that the US supported Al Qaeda and other terrorists in Syria; Trump’s election only led to this coming out completely.

The key we haven’t discussed as yet- is Obama’s support of neo-Nazi groups in Ukraine.

First- we must understand Ukrainian society in general. It is Ukraine arguably that is the first seat of the Russian peoples. Kiev- the modern Capital of Ukraine- was the first organized Russian State in history and for most part of recorded history, the areas in Ukraine formed part of either Russian or Mongol-Russian Empires.

Ukraine itself consists of four major ethnic groups- Galicians in the West, Russians in the East, Cossacks in the South, and Tartars in Crimea. All these groups have a long history of ethnic war, and only were united during periods of central rule. The present discord stems from the period of World War II when the Nazis, during their genocidal march onto Moscow, used the first group- ethnic Galicians- as tools against the Russians. The Nazi genocides and Soviet persecution imply that few, if any, Cossacks and Tartars are left in the country. Thus, the primary antagonism has always existed between the Galicians- who are culturally similar to the Polish, supported the Nazis- and NATO, and disdain Russian culture- and the Russians- who speak Russian, hated the Nazis- and NATO, and wish for peace with modern Russia.

The fall of the Soviet Union is an example of the insidious and corrupt nature of Liberalism.

The Soviets were Leftists- but they were also Nationalists. The politicians who replaced them in ‘democratic’ Russia were Liberals but not Nationalists. Living standards plummeted across the former Soviet Republics, Corruption ran rampant, and Russia’s GDP and Life expectancy fell to levels that haven’t yet recovered to Soviet levels. Putin- a dedicated Nationalist- changed all that; until the current sanctions- again, put in place by Obama- Russia was a dream economy, its growth matched by India and China.

The current crisis was sparked off when these neo-Nazi groups- who are usually armed by NATO smugglers- took control of Kiev and drove from power the democratically elected President Viktor Yanukovych. NATO claims that Yanukovych was a Russian stooge are to be taken with a grain of salt; why should it be a concern of the West who Yanukovych ally with? Further- Yanukovych had earlier served as Prime Minister under the pro-NATO President Viktor Yuschenko- and few had complained then. Charges of corruption against him are, as yet, unproved- but similarly absurd considering that even the moderate heroes of the pro-NATO faction- such as Yuschenko and Yulia Tymoshenko- are neck-deep in Corruption scandals themselves.

When moderate pro-NATO politicians proved incapable of winning the support of Ukrainians, it is evident that NATO took recourse to neo-Nazi fanatics.

The neo-Nazis have engaged in routine massacres against the Russian population of Eastern Ukraine- in violent pogroms where men have burned alive and women raped. The Civil War itself directly started with the Odesa Massacre; where hundreds of pro-Russian civilians trapped inside the Trade Unions Office in Odessa and burned alive- by people set in place by the Obama Administration. Even now, Kiev-controlled ethnic-Russian territories such as Donbass are subject to shelling and massacres by these neo-Nazis- and not a word is spoken off in international media. In contrast- the much criticized Crimean Republic is an oasis of peace under its former prosecutor general and current MP of the Russian Duma, Natalia Poklonskaya- a women whose very position would be untenable under the pro-feminists and vehemently-misogynistic NATO lick-spittles.

So much for the Liberal idea of Women Rights.

What Ukraine is experiencing is called a ‘Colour Revolution’: fake revolutions funded by the CIA and Washington to overthrow ‘troublesome’ regimes using a combination of Media, Liberal bodies, and NGOs- and explicitly described as ‘a new form of Warfare’. Putin himself has spoken of them: ‘We see what tragic consequences the wave of so-called color revolutions led to. For us this is a lesson and a warning. We should do everything necessary so that nothing similar ever happens in Russia.’

These ‘Colour Revolutions’ present an even greater challenge to India- since our nation has no lack of Liberals, Communists, and ‘sophisticated, educated’ Sell-outs without an ounce of Nationalism in their bones.

The weapons these Colour Revolutions use- the Media, NGOs, hordes of chanting, brainwashed students, the siren call of Human Rights (while Saudi Arabia heads the Human Rights Council and Obama stuffs Gitmo with innocents), the call for ‘Tolerance (while NATO allies stone women and rape entire African nations into destruction)- are common everywhere and even easy to identify. Even if Trump- who has been openly against intervention against non-Islamist powers- takes the helm of Washington, it is undeniable that the State Policy of the past decades can be wished away in a single term. It is imperative that Indian citizens and the Government remain vigilant and ever ready to counter such Liberal plots to bring India to its knees.