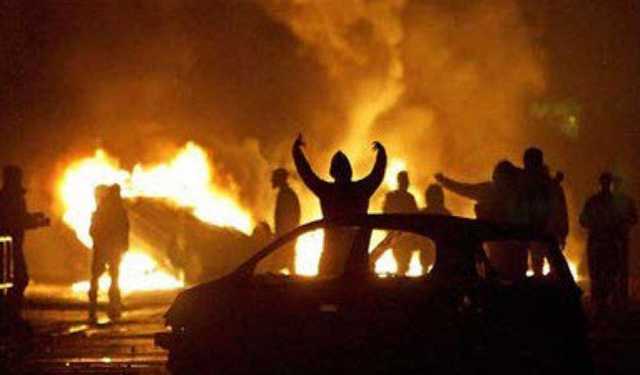 Two days after Donald Trump was ridiculed for questioning Swedish migration policy, riots broke out in Rinkeby, an immigrant suburb of Stockholm. The incident happened when the police officers arrested a wanted drug peddler. After his arrest all hell broke loose and young immigrants gathered in the center of Rinkeby (Stockholm suburb), not to protest but disrupt the normal lives of Swedish citizens. They hurled stones, looted shops and damaged private properties. The police had to fire warning gunshots to displace them. Reports came that some policemen were beaten by mob when they were on regular patrol duty in the same area.

Rinkeby has a high concentration of immigrants belonging to different Islamic countries.

It is the same place where 60 minutes crew was assaulted last year when they went there to shoot documentary on immigrants. Most of them are from war torn countries in Africa and Middle-East. These immigrants have formed ghettos in the city where they live with their Muslim brethren and do not intermingle with the Swedish culture.

Sweden has the best record of human rights in the world; it has given shelter to war victims in World War 2 and continued its policy to welcome migrants with open arms. Over the course of 15 years 650,000 people went to Sweden in hope for asylum. Last year 163,000 migrants requested asylum of which 32,000 were granted. The immigration takes its toll on the Swedish society which pays for the seekers in form of taxes. Precisely, 22% of the money collected by the government goes to the welfare of the migrants.

Immigration to Sweden has been quite tremendous for the last few years.

Because of immigration the government is making cut to the funds provided for the welfare of Swedish citizens. There has been a housing crisis for quite some time as housing for all motto seems to fail; the pensions and the support for elderly people have been cut. The schools cannot afford even temporary teachers in Gothenburg. It’s clear that the money that before went to the welfare of the citizens is funneled to immigrants so that they can support their families. The worst thing is that most of the immigrants are unemployed and are proving to be liability to the government. The authorities have failed to provide any sustainable solution to the immigrant crisis that depleting the nation’s resources. One solution is to set up refugee camps and provide temporary immigration. The immigrants must gain employment in order to have permanent asylum.

There has been sporadic growth of Islamic ghettos which have been labeled as “no-go zones”. In these areas drug peddling, pedophile crimes, sex crimes and attacks on police are common occurrences.

Last year National criminal investigation service confessed that the number of “no-go zones” were more than 50.

Situation is so worse in these areas that the ambulance service refused to go in these areas; same is the case with fire service who has to take help of police to carry on their duty without any obstruction. The vehicles can’t be left unguarded in these places because there had been occurrences of windows smashed and tires deflated. Similarly another suburb Malmo has large aggregation of immigrants and has unemployment rate of 15% which is twice the rest of Sweden. Anti-Semitism has also risen. In Malmo Jews are targeted regularly, they are harassed and assaulted on the streets. Many have left the city and are forced to become refugees in their own country. Sweden also witnessed rise in crime rate. As per Swedish National council for crime prevention (Bra) which is the keeper of crime statistics between 2012-2016 the murder rate increased by 70% .The rape rate between 2007-2015 share the same number.

Despite all this the Swedish politicians are in denial mode of anything wrong with their policies. The veteran police officer Peter Springare made his outburst through a facebook post blasting political correctness of his country’s leaders. He is now under investigation by his own department for inciting racial hatred and disturbing the peaceful atmosphere of his country. What can be worst than shooting the messenger?

The authorities try to justify immigration reasoning that the young immigrants would substitute the ageing population of Sweden. The Swedish Prime Minister said that he was surprised by Trump’s comments on Sweden as if nothing was wrong. The political correctness is costing Sweden a lot and the media with nexus with politicians is trying to deny the havoc created by Islamic immigrants.