The United States is “possibly” going to change its stance on ISIS, and it must 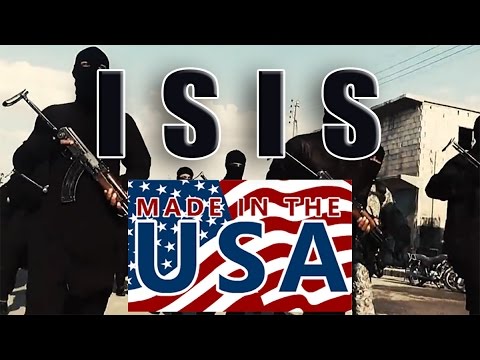 We all have heard the intriguing tale of serendipity, a fight between two monkeys, regarding a loaf of bread, which a cat offers to solve, by eating the larger piece of one of the monkeys, then of the other monkey as neither of their breads could ever reach equal size. This goes on and on, until none is left. The cat benefits from the fight of others. Yes, the cat in this story is cunning, but what adjective would you adorn the cat with, were it was the one who happened to have instigated the fight between them? Evil and vicious. What would you say, if the cat “allegedly” armed the monkeys to fight?

There was a man during the 90s in Jordan, who went by the name, Abu Musab Al-Zarqawi, a man driven with his personal gain and glory, but also religious fanaticism. He had maintained his Islamic fundamentalist group with ease and to expand, he reached out to Osama bin Laden and eventually merged his group into the latter’s, called Al Qaeda in Iraq. He was later killed in 2006, but not before he planted the seeds of the largest terrorist organization of the world, the ISIS and the Islamic State.

Owing to its complicated military, political and social roots, the discussion of the rise of ISIS is never ending, and people more knowledgeable than me have said and written thousands of pages on it. The liberal media of the western democracies have always painted the wrong picture, and failed to point fingers at those responsible. However, the facts available publicly, puts the blame on the interference of United States government in the region. And now, the United States, is trying to mend its mistakes (Clinton’s mistakes specifically) by organizing anti-ISIS Summit. 68 countries have participated in it.

United States has considered itself the international police post World War II. President Richard Nixon wanted to invade India during the Bangladesh War. The USA wanted to prohibit the referendum of Sikkim merging into India. This is just one example. Under the pretext of a civil war, the United States has always removed any government from power that dares challenge its world leader authority. There is always a faction fighting against the government in every country. A country is always at war within itself. Some factions will always try to pull the government down. These type of people are common in countries with all kinds of government, even democracy. The Naxalites in India is an example of such a group. (One might also wonder, how they get their hands on such advanced weaponry?) The government in question can use any means in its arsenal to put a stop to the rebels, including force. Al-Assad, the dictator of Syria wanted to bomb them. The United States interferes in such situations, invades that far away country which does not pose any threat to it and establishes a government which will co-operate with them. Libya, Afghanistan, Iraq, Syria, Vietnam, the list goes on and on. It has been at war with other countries since 1776 for the most part of its existence.

The United States government and the left leaning media tried to justify their best on why they invaded Iraq and Syria, but the ground realities, and lack of evidence to any threat to the US from any weaponry, chemical or biological, clearly tells us a fact that either the United States intelligence could not see the obvious outcome of invasion that was ISIS, or it was a well orchestrated plan, keeping the oil and oil businessmen in mind, and President Bush had not messed up like it was projected in the media.

So what exactly did the USA do in Syria and Iraq? Well, long story short, they invaded and brought down the dictators, Gaddafi, Al-Assad, and Saddam Hussein. They tried establishing a government as a replacement who would toe their line, a line of cheap oil. This has been done in the Middle East and elsewhere since the industrial age, with the most notable and earliest being the coup of Iranian government, with the direct help of Winston Churchill. Oil is the currency.

There’s extensive writing on the rationale behind the USA invasion of Iraq, Syria and Afghanistan, but no matter how much complicated passages one might write, the evidence/ reason required to invade another land thousands of kilometers away should make sense. Both of these dictators, Gaddafi And Saddam Hussein had kept a strong lid on wahabi small and religious fanatics, but with them gone the already damaged, bureaucratic, social and security system fell apart. The USA disbanded the Iraqi army, leaving thousands of military trained people jobless, and in anger. The foreigners were messing with their country. Weaponry is cheap and easily available (one might wonder why). It was a purge. Chaos wreaked everywhere.

The de-baathification (like deNazification) of Syria during 2003 and 2004 also left a lot of resentment, anger and turmoil, and within a collapsed economy (oh, but oil), people joined religious fanaticism.

Hillary Clinton’s and Obama’s foreign policies to overthrow Gaddafi in Libya and Al-Assad in Syria is the reason ISIS rose to such heights. To pull down Assad and Gaddafi, they provided aid to the rebels, allegedly armed them. The US Sheltered and protected them from the bombs of their government by putting no-fly zones into effect. Russian President Vladimir Putin in a press conference himself alleges that the US provided financial aid to Islamic State, gave them weapons, as well as hired mercenaries and local leaders to rise against the dictators. The mercenaries captured the oil fields and we can guess who got the oil. [1] ISIS rose from this. The cat in this story is, the Americans.

Two days ago the USA convened the largest summit against the ISIS.

All of its allies took a seat in the summit, including Iraq. However Russia, the major entity in pushing away ISIS, is not a part of the global summit. This Summit, hosted by the newly elected Trump government could be observed as a showcase, a front face for a change of policies. Could this mean, that America might rectify its mistakes of aiding rebel groups and taking down governments? Or will it send more troops to exterminate the armed religious terrorists first? Will America stop being the global police under Trump’s rule and will just care about its own backyard? Only time will tell. The ISIS attack in Britain during the summit in America tells us that the ISIS still has resources and shows no signs of stopping anytime soon.

Meanwhile ISIS and other terror groups who identify themselves as part of ISIS are at attack from several nations, including Russia and America. However it continues to hold and influence a huge part of Syria and Iraq, as well as all around the globe. Their support banners and flags can be seen as far east as Jammu and Kashmir. Their latest attack was at London near the British Parliament. The Islamic fundamentalism, like any other type of religious terrorism continues to ail all humanity. The hunger for cheap oil has been putting the Middle East at war for decades. Even if we consider that the cat did not arm the monkeys, it sure did eat a lot of oil. I mean, bread.

[1] Putin alleges that USA is the sole creator of ISIS

Indian Feminists – Oblivious to realities, logic and the state of womenfolk in neighboring countries

Big setback for Donald Trump, but this can very well be a blessing in disguise