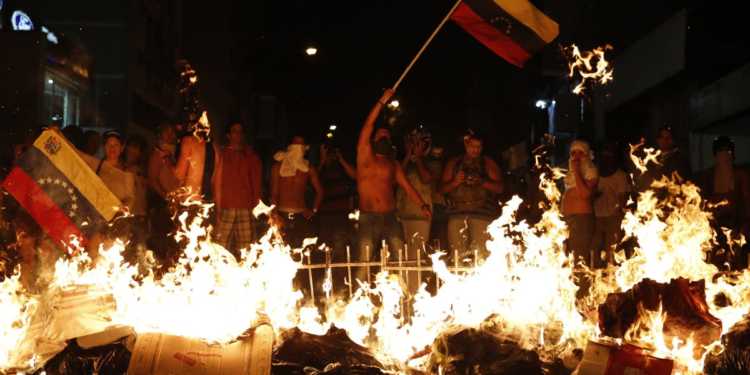 It is well known to the world that Venezuela, the Latin-American country is facing severe economic and humanitarian crisis. If mainstream media is to be believed the crisis in Venezuela is getting severe day by day. Venezuela’s crisis is the result of the faulty policies of its socialist government. Instead of ending the crisis, the actions of government over the last several years have made it far worse. However, it would not be wrong to say that the Venezuelan government is bound to act in a hostile domestic and international environment.

The opposition has openly called for regime change even if it is achieved by violence. The political climate in Venezuela is so toxic that the opposition does not recognize President Nicolas Maduro’s April 2013 victory. This has resulted in violence by opposition supporters. They vent their anger at state-run health clinics that had left at least seven civilians dead. There were reports that February 2015 violence claimed life of 43 citizens. Also, it’s not uncommon to read news about looting, dangerous food and health supply shortages, and massive protests coming from different parts of the socialist South American country.

What caused the oil rich Venezuela to become one of the world’s worst economy?

Things got really bad when oil prices started to plunge in 2014. Venezuela has the world’s largest oil reserves, but the problem is that oil is the only thing that it has. It makes up over 95% of Venezuela’s revenue from its exports. If Venezuela doesn’t sell oil it would not have money to spend. Oil prices were over $100 a barrel in 2014. Today, the oil prices in international market are around $53 a barrel. Last year they dropped to $27 per barrel. The problem is that Venezuela has not taken care of its cash flow destroying opportunities to invest in its oilfields when times were good. Because the country has neglected infrastructure of its oil facilities, production dropped to a 13-year low last year. PDVSA (Venezuela’s state-run oil company) didn’t pay the dues to oil companies such as Schlumberger that help extract its oil. Last year Schlumberger and other oil companies reduced operations with PDVSA because of unpaid bills. PDVSA may have barely avoided default in 2016 but its finances seem to have further worsened.

In January 2017, some tankers full of million barrels of crude oil, diesel gasoline and LPG were anchored in Venezuelan and Caribbean waters as they were not cleaned. To make the matter worse 11 vessels full of oil and oil products were retained or embargoed by port authorities, maritime agencies and inspection firms because PDVSA did not pay its bills. The maritime laws do not allow dirty tankers to travel through international waters as they possess high risk to environment. The PDVSA’s debts to cleaning services operators have been piling up and there is no solution to this crisis.

Protests in Venezuela have gained momentum this year. They were dealt with a violent response by police and pro-government forces. The Venezuela’s Supreme Court stripped the country’s congress of its legislative powers in March this year. The National Assembly’s legislative authority was transferred to the Court that has judges that are loyal to President Nicholas Maduro. The country’s opposition leader claimed that this move has given dictatorial powers to its socialist president who is running the show through judges. Most of the Latin American nations have broken off ties with Venezuela. The president of the Organization of American States accused Nicholas Maduro of crushing the values of Venezuelan democracy. Even though, the Supreme Court backtracked later, following this, mass protests broke on streets. Some of them turned violent.

Last week, about five Venezuelans were killed either by police or by the people demonstrating violently in support of the government. The turmoil has been ongoing for the last two weeks following the failure of the legislative coup by the government which is trying desperately to get more political power. The crisis that began with the collapse of oil prices in 2014 has led to the implosion of Venezuela’s ‘Red Revolution.’ All that remains is the suffering and misery that is known only to those who have struggle under socialism or communism. The situation is so bad for some Venezuelans who don’t have access to potable water and consumer goods for daily needs are scarce. Most of the Venezuelans are unable to afford two meals per day, forcing them to search for edible food in garbage dumps. Amid the national crisis social media is flooded with images and videos of Venezuelans ransacking shops in the desperate search for food.

Venezuela, once Latin America’s most powerful petro state, is on the brink of collapse after decades of economic mismanagement. All this is a result of faulty socialist policies carried out by Venezuelan politicians. How the country fares in future is unknown but it can be inferred that unless Venezuela leaves its socialist policies, it will face crisis again and again.

Did America hack into North Korean systems and bring down its missile?