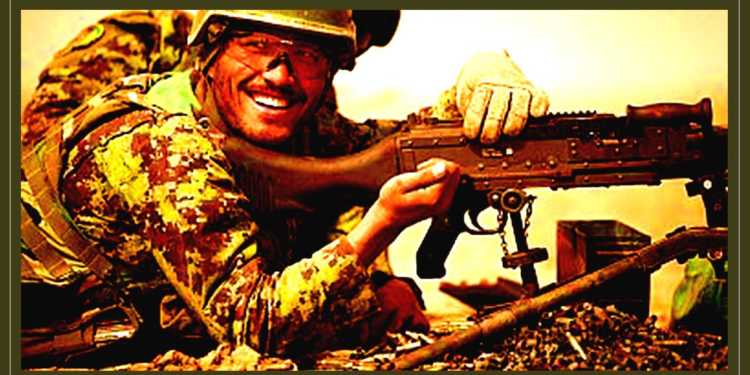 Guns roared on both sides of the Durand line when Afghan forces opened fire at Pakistani troops who were escorting a census team near the Chaman crossing point along the border. The Durand Line is named for Sir Henry Mortimer Durand, the former British diplomat who first established the border in 1896 which runs through vast ethnic Pashtun areas on both sides. The border drawn by the British still remains disputed issue to this day.

Relation between Pakistan and Afghanistan has been full of tensions in the past.

Both accuse each other of providing sanctuaries to terrorists, a claim which both sides deny. Of course, it’s well known the epicenter of terrorism not only in South Asia but around the world is Pakistan which harbored Osama Bin Laden in Abbottabad.

Despite several high-level visits by Pakistani intelligence and security officials to Afghanistan recently the relations continue to deteriorate between the two countries. The border is roughly 2,500km-long border, which runs through mountainous terrain and is porous. There are very few checkpoints and almost no fencing along the border. During Cold War era when Afghanistan was attacked by Soviets, mujahedeen from Pakistan were encouraged to go to Afghanistan to fight them. But this is not the case anymore.

Skirmishes along the border are regular now with casualties on both sides. Terrorists from Pakistan take advantage of porous border to cross Pakistan. They are trained and backed by ISI to spread terror and instability in Afghanistan. Last year in March a Taliban attack on a government intelligence building resulted in 64 deaths and 347 injuries. Pakistan is wary of India-Afghanistan bonhomie and wants to disrupt it all costs.

In the same month, terrorists which included suicide bombers attacked the Indian consulate in Jalalabad city of Afghanistan in which four militants were killed by Afghan police and two militants blew themselves. It was fourth attack on Indian mission in Afghanistan since 2007.India is involved in Afghanistan in various development projects. After the operation “Enduring Freedom” the space to rebuild Afghanistan is left vacant by America which got embroiled in other wars in the Middle-East.

Pakistan started conducting a nationwide census in March this year with censor-takers going door-to-door to collect information. This is first such census by Pakistan after 1998.The old border dispute between Pakistan and Afghanistan has ignited again. Afghan President Hamid Karzai has repeatedly said that Afghanistan would never accept the Durand Line as an international border.

More than 2,00,000 Pakistani troops are taking part in the census exercise. When the census team along with troops tried to enter Luqman and Jahangir villages they faced violent outburst from Afghan forces. At least 15 people were killed and dozens others injured on both sides. Around 11 Pakistani soldiers and 6 Afghan soldiers were killed in the clash. According to Afghan foreign ministry it had warned Pakistan previously to not conduct census in the disputed area. But Pakistan did not pay heed to the warning and as a result faced the consequence.

The clash was not limited to gunfire; there was heavy shelling by Afghans. As per the local residents, dozens of shells slammed into nearby Pakistani villages. Some shells were even in the close proximity of regional headquarters of Pakistan’s paramilitary forces. At least 42 people were reported wounded on the Pakistani side which included women and children. Gen. Abdul Raziq, the police chief of Afghanistan’s Kandahar province accused Pakistan for initiating the gun battle. According to him Pakistan is using census as a mask to conceal the crossing of militants from Pakistan into Afghanistan.

After the fight Pakistan’s Prime Minister called the clash as “unfortunate” event and urged Afghanistan to stop terrorism. Defense Minister Khawaja Asif went one step ahead when he stated that Chaman incident is reflection of Delhi-Kabul nexus on Pakistan’s western border. He claimed that Afghanistan is launching such actions to divert attention from its internal politics. However, this is not anything new Pakistanis always cry foul and blame others without cleaning their own house.

Pakistan has failed to stop terrorism and take actions against terrorists who are enemies of humanity. Instead it discriminates between good and bad terrorists. Pakistan harbors and nurtures terrorists in terror launch pads which attack India. On the other hand, it carries out offensive operations against Tehrik-i-Taliban which sporadically carries out attacks in Pakistan. This dual behavior exposes the Pak’s hypocrisy in fight against terror. Also, Pakistan must follow International laws and not undertake any activity which hampers peace in the region.

If Pakistan continues to act hostile to its neighbors, the rift would widen and it would be the biggest impediment to a peaceful South-Asia.