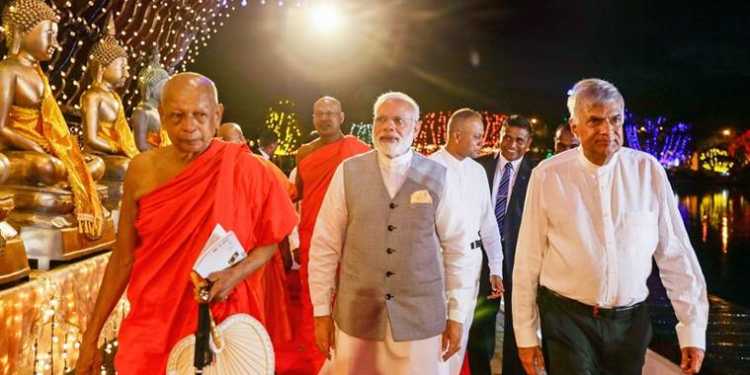 Amid the growing concerns in Delhi with the China Pakistan Economic Corridor which threatens India’s sovereignty as it passes through Pakistan occupied Kashmir and China’s ambitious One Belt One Road project which questions India’s geo-strategic importance in the region, Prime Minister Narendra Modi embarked on a two day bilateral visit, his second since assuming office to the island nation of Sri Lanka.

Prime Minister Modi became the first Indian PM to visit Sri Lanka on an official bilateral visit in 2015 in 28 years. This visit coming a little over two years after the previous one was to celebrate the UN International Vesak Day, held first time in Sri Lanka of which PM Modi was the chief guest. Vesak Day, also known as Wesak or Buddha Day, is a traditional holiday celebrated annually on the full moon of the ancient lunar month of Vesakha. It is celebrated by Buddhists and usually falls in May or early June. Attended by dignitaries of close to 85 countries, PM Modi urged the world to follow Buddha’s teachings of peace.

This visit is being seen as India’s bid to repair the relations with Sri Lanka which were at an all-time low under the former strongman Mahinda Rajapaksa’s regime. India has always considered the island country to be within its sphere of influence. However, under Mahinda Rajapaksa who believed that China has more to contribute to Sri Lanka than India, inked numerous pacts with China, increasing the Chinese presence in the island country much to the bemusement of India. The relations between India and Sri Lanka hit an all-time low when Sri Lanka allowed to dock China’s submarine in the island in 2014. However 2014-15 saw change of Government in both the countries, with both the governments trying to improve the relations.

India has a rich history in its tryst with Buddhism and Sri Lanka having one of the highest number of Buddhists , PM Modi believes India can strike a chord with Sri Lanka through cultural heritage. It was not surprising when PM Modi visited multiple temples during his visit. He also announced a direct flight from Varanasi to Colombo similar on the lines of Varanasi and Kyoto (Japan) in a bid to make them sister cities. However no MoU was signed during the visit which is being billed as a religious and a cultural visit. Apart from inaugurating a hospital in Dickoya which was built with India’s assistance, PM Modi also addressed the Sri Lankan parliament hoping to see “a quantum jump in their relationship.”

In the face of Chinese aggression to assert itself in South Asia, PM Modi has started to build relations with India’s immediate neighbours except Pakistan. Last 2 years has seen India building strong relationships with Afghanistan and Bangladesh. However Sri Lanka remains strategically important to both India and China. Currently, Delhi’s portfolio of financial assistance to Sri Lanka is at 2.6 billion dollars, which is way behind the Chinese assistance. Sri Lanka due to Rajapaksa can never really wriggle out of China’s clutches due to huge amount of debt owed by Sri Lanka. Along with three visits by Sri Lanka’s Prime Minister Ranil Wickremesinghe and two by President Maithripala Sirisena to India since the 2015, these trips reflect Delhi’s aggressive diplomacy to rebuild the relationship with Colombo that hit rock bottom in the years immediately after the war.

PM Modi faced opposition from the Sri Lankan opposition led by Mahinda Rajapaksa prior to his visit over the Trincomalee port. India and Sri Lanka have agreed to jointly develop the Trincomalee port, the MoU was signed during Sri Lankan PM Ranil Wickremesinghe’s visit to India. India in the past had not been particularly enthused about developing the port due to its economic viability. But its hand seems to be forced to prevent further Chinese presence in Sri Lanka. Sri Lanka under Rajapaksa, initially offered India to jointly develop the Hambantota port but India rejected it citing its economic viability. Hence, the port was offered to China which they accepted with both hands. India’s concerns over its economic feasibility stand vindicated but now have to deal with heavy Chinese presence in the region. Sri Lanka has allowed China to build a special economic zone in Hambantota and also to further expand the Mattala airport.

Sri Lanka’s increasing closeness to India can be seen as a country which is extremely worried about its strategic autonomy as it seeks a way out from the huge Chinese debt.

Despite the popular belief that the Trincomalee Port agreement is a way by Sri Lanka to counter balance India, India cannot counterbalance the leverage China holds.

Hambantota has gone from a Chinese funded Sri Lankan project to a Chinese owned and run territory in the Indian Ocean. But India can help Sri Lanka by building counter wailing influence and the Trincomalee agreement strives to achieve that.

A visit which was pretty much routine, bereft of any big tickets deals or MoU, a bid to check China’s influence over Colombo could have turned into major embarrassment for Delhi.

China had requested permission to dock its submarine in Colombo (while PM Modi was midway through his visit) like it did in 2014, but Sri Lanka flat out refused the request leading to an agitated China to dock the submarine in question at Karachi, Pakistan. These are clear signals of how and with whom Sri Lanka wants to move forward in the future.

Just hours after PM Modi’s departure from Sri Lanka, Sri Lankan PM Ranil Wickremesinghe departed for Beijing to attend the much hyped OBOR conference at which India is not participating. Also, China will certainly seek to expand its growing influence in Sri Lanka and it remains to be seen how Colombo and more importantly PM Modi react.

The Modi Government is perhaps entering its most challenging year with respect to its foreign relations. PM Modi is expected to visit USA this year and look to resolve the H-1B visa issue. Complex situations like CPEC and OBOR will continue to remain a headache for India coupled with Chinese pressure on India to change its stand on the South China Sea dispute and lastly the NSG membership will be few of the many problems the Government would face this year.

It is often said that diplomacy is PM Modi’s cup of tea and it better be a strong one.