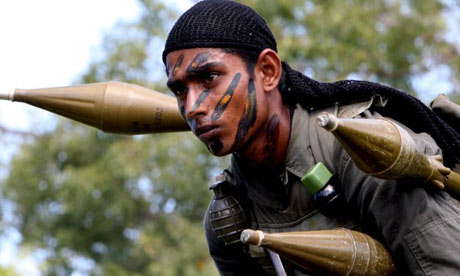 The Maoists have become a parallel of Liberation Tigers of Tamil Elam in our case. The barbaric nature of operations, sudden and surprise attacks on the forces, looting their weapons and to operate from deep, dense jungles is what LTTE a progenitor of. The carving of “liberated areas” by the Maoists is also in line with what the Tigers used to practise in Sri Lanka.

The Maoists bear an uncanny resemblance with the LTTE in all of the above. This naturally leads us to what are our options to fully eradicate the menace of the Maoism militarily like the Lankans did given the fact that we have been using them albeit very restrictively.

Within a span of two years during the Elam War IV, the Sri Lankan army did what was considered a miracle by them for 24 years. The Srilankan army just changed its on field maneuvering. What it did was to ensure that its jawans don’t fell aprey to the mines laid down by the LTTE.

To ensure this, patrolling vehicles were assisted by sappers who specialised in cleaning the area to be patrolled by the jawans later, of any booby trap, IEDs and mines. This ensured timely reinforcements of positions. So far the CRPF has no assistance from the sappers against the IEDs, Booby Traps and mines.

This reduced the fatalities for the Lankan Army in the Elam War IV and enhanced the pace of the operations as well. The Lankans were assisted by a bridging squadron to take care of the ditches and bunds which restricted effective army movement. The Engineering Corps modified the tractors to compensate for un-motorable roads which made the jungles out of access due to heavy monsoons. The ditches were crossed using spring loaded ladders.

The CRPF in its jungle warfare doesn’t have any assistance from any such Engineering squadron/Corps. All they have is limited protection against the IEDs in the form of Anti Mine Personnel Vehicles which get affected adversely in case the Maoists plant bigger quantities of IEDs.

During Elam War IV, the Lankans recruited locals and trained them in a special 44 day course so that the army men know the terrain of the country in and out. The CRPF does not enjoy this tactical advantage too in its war against the Maoists.

CRPF also hasn’t focused on developing a paramedic corp of jawans. This will have many advantages as they can provide the necessary first aid in case of eventualities as well as treatment against tropical diseases like Hepatitis A, Malaria that exert a toll over the CRPF.

The use of choppers should be stopped as it blows the stealth cover off and should be restricted only for evacuations. Apart from that it makes the choppers an easy target for the anti aircraft RPGs of the Maoists. In the Elam War IV the Lankans used their Mi-24 choppers just 5 times in 3 years and that too for evacuations. We have to ‘out guerrilla’ the guerrillas in their own territory.

The Chintalnar massacre and the Sukma ambush reveal that we need to move in smaller groups during the patrol movements.

The Srilankan Army did it with perfection during the Elam War IV.

The Maoist sympathising media should also be denied the entry in the warzone. The Lankans managed the public opinion by a complete ban on not only the international but also the domestic media coverage of the Elam War IV.

This is what we need to learn from Srilanka in its war against the most advanced terrorist outfit ever in the world.

Frequent and rapid attacks over the Jawans hit the morale of the entire force.

India itself is a witness to the success of the Lankan military campaign against LTTE as it is now building a Thermal Power Plant at Sampur, the town which used to be a LTTE stronghold in Eastern Srilanka.

The challenges before us are not as monumental as they were before the Lankans. Our adversary is way insignificant than what the Lankans had to face if the sizes of the COIN forces are compared.

We need to drive this final nail in the coffin of Maoists with utmost authority and the template is not lying very far from us.