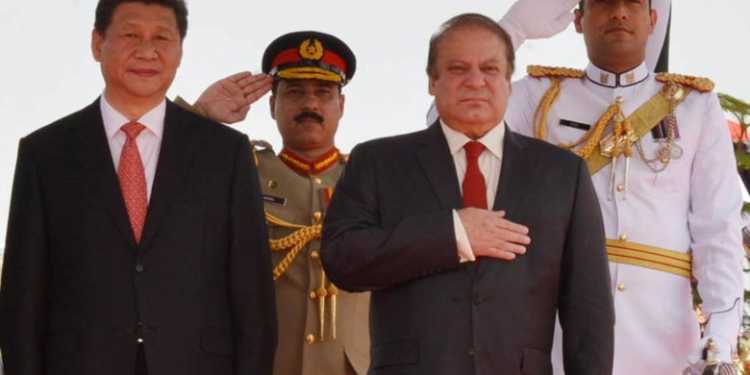 India boycotting China’s much advertised ‘One Belt, One Road’ project has been criticised by Chinese and that is expected. But, since India is a democracy, it is expected that the decision by Indian government is critically reviewed by some Indians too. Despite China launching OBOR with much fanfare, it is bothered about the absence of India in its forum. Why? Certainly India is neither economically nor militarily as powerful as some European nations that have joined the project. The absence of India took away the sheen from the project itself.

Returning from China after unofficially representing India in the show, Sudheendra Kulkarni feels India has done a wrong thing.

Meanwhile, Nawaz Sharif is trying to prepare himself to explain to his people ‘how he is not selling Pakistan to China’. He criticized the stand of hardliners in India and Pakistan on Kashmir issue. At the end of his column he concluded by hoping Modi shows some vision and courage as OBOR Initiative is not a threat to India, but an opportunity. Even Mani Shankar Aiyyar, for all his penchant of ‘requesting Pakistan’s support to uproot Modi’ felt Indian government was wrong in not joining OBOR. In his enthusiasm to criticise Modi, Aiyyar forgot how his mentor Nehru learnt ‘lessons in foreign relations’ from China after his Panchaseela/War fiasco.

Coming to OBOR, it is neither a threat to India nor an opportunity. We better get into details before concluding.

First, from Kazakhstan to Azerbaijan there are many countries that started claiming the revival of old Silk Road was their initiative. And some of their talks and initiatives predate Xi’s plan of 2013 by more than a decade. Yes, it is China that had envisioned this grand plan (Yes, it is too grand, it needs a full column to describe it) and is pumping the funds and so assumed rights over the project.

The international Airport at Hambantota in Sri Lanka, made by China remains the ‘World’s Emptiest International Airport’. With other projects of China too on the anvil, Sri Lanka is deep in the debt and is unable to repay the loans it took long ago for the simple reason there is no revenue generation. Sri Lanka offered to compensate by providing more equity, but the Chinese want their money back. Forget India’s influence over Sri Lanka to counter China, the locals protest Chinese!

In 2009, Chinese company COVEC won the bid to build A2 highway at half the budgetary cost projected by Poland. They simply could not execute the project as they failed to hire locals and sub-contract equipment locally. When COVEC had to import equipment from China to construct the highway, costs escalated forcing them to renegotiate the contract with Poland. Poland refused renegotiation and wanted COVEC to honour the contract. COVEC ceased working and Poland filed a lawsuit. And, this project became ‘the motorway that China could not built’. So much for the Manufacturing Excellency of China.

Mr. Aiyyar’s talk of Germany pushing for ‘free tendering’ so they too can have a part of the OBOR pie falls flat. Europeans know how to differentiate between signing an agreement and implementing it. Neither China nor India has mastered that art of ‘interpretation’.

China inked an agreement with Serbia and Hungary too, to build 350 KM high speed rail. Later on Hungary realised it cannot award contract to China Railway International Corporation, despite China funding the project. According to EU guidelines, public tenders shall be called and so finally the project was ‘derailed’.

Even for CPEC, China has made a long term plan that Dawn has leaked. China would be funding a massive upgrade of Pakistan from agriculture to industry to fibre optic connectivity and building new secured cities. Who will use the end produce? All agriculture produce will of course go to China. Others? Even China’s industry is now slowing down due to stagnated or reverse globalisation. Just to address the ‘increased pollution’ in Chinese cities, this year China had to shut down Aluminium Smelters, which reduced global production and pushed LME north after long.

China is providing nil or low interest loans to Pakistan to the tune of ~50 billion dollars. And the same China considers Pakistan’s economy cannot sustain an inflow of foreign funds more than one billion, without destabilisation. So, what is for Pakistan in it? Chinese companies will have an ‘access’ to Pakistani establishment and locals would be forced to cede with their lands.

For the overpopulated China, Pakistan is ceding the historic ‘Indus Valley’. Of course, given the current nature of Pakistani establishment, they don’t much value their heritage.

But, was it not exactly how Colonial India was created by the British Empire? All independent kingdoms of Indian sub-continent have become vassal states to the erstwhile British era. It is true that Brits have developed rail, road and telegraph infrastructure in India, apart from laying foundations to Modern Industry. However, the impetus of the imperial rule was always guided by advantages to the masters and not to the subjects. So, all the English education could produce was clerks, who could push the interests of the Queen. Even the education provided to people belonging to lower castes has many times come with a baggage of accepting the Book and lives by its order. The same can be said of the erstwhile Mughals, who too encouraged the aristocrats of Hindus and only converts from other castes.

China is in fact bettering the English game of colonisation. Pakistan had signed an accord to teach Mandarin in the schools of Sindh, in 2015. Though the accord was signed in 2015, trials were started three years prior to the signing. Of course, the experiment failed as there was no practical use to the language for the kids who studied it. Well, now the situation will change. With more Chinese businessmen living in Pakistan overseeing the projects, there will be a need to hire locals with Mandarin skills. Job creation would propel the interest and so Chinese will be at par with English in Pakistan, much like English is the de facto official linking language in India. Indians learnt English so they could be employed. So would Pakistanis by learning Mandarin. The shift in culture would be swift and for sure. Maybe it is good for the fundamentalist Pakistan to have a Communist medicine that may act as an anti-dote. [Anyone here would like to comment on how minorities suffer in India better realise there are no minorities left in Pakistan to complain about]

How Pakistan is expected to return the loans by China?

Was it not a fact Pakistan could not pay $300 million for the much needed F-16s, when Pentagon refused to subside the bill? How can a country that could not pay $300 million can repay more than $50 billion (the exact figure may be much more) being invested by China in Pakistan? For how long, Nawaz Sharif can mortgage Pakistan to China? What happens if revenue generation from the project is not as per the expected cash flow estimates and Pakistan fails to earn sufficiently to repay? China is known to construct ghost cities which may be populated after a decade or two. China can afford it. Can Pakistan afford?

Most of OBOR lines are not through Indian Territory, except the CPEC. Given the stance of Pakistan not allowing India to use its territory accessing the northern roads is simply not possible for India. As such, India’s business with China is blooming; scales firmly tilted to China’s favour. For China, India’s participation would lend a much needed democratic credence in the forum. Many of the participant nations that are the transit points in the OBOR layout are unstable by nature.

If China comes to India, it is natural they prefer to get a hold on resources and take them back to China for further processing which is a high value adding process. If they can’t lay hands on the resources, the next best course is to sell their technology, equipment and finished goods that are cost effective in Indian market. This would be a win-win situation for both countries and is now in vogue.

Considering all these, participating in OBOR would be neither a threat nor an opportunity for India. However, the long term plan that China prepared is a beautiful and interesting document. And, this would be discussed separately.