Shocking! UK Authorities had all the intelligence and info, they still allowed London Bridge attack to happen 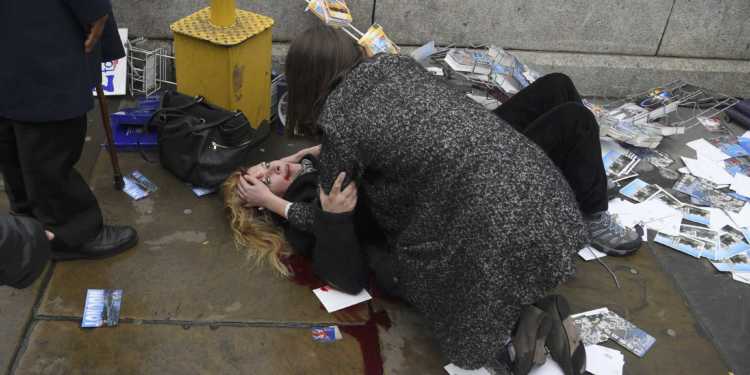 Below is a partial re-construction of the nightmare that visited London Bridge and Burroughs market on Saturday night (June 7, 2017). It is a 10-minute snapshot of how “evil” in the form of a vehicle and 3-men spouting an ideology while brandishing 12-inch blades went about knocking down, running over, chopping, slashing, and stabbing innocent people and in the process ushering in a new “normal” where no place is safe and every person shall be looked at with suspicion.

10 minutes of mayhem, terror, and death on London Bridge:

9:58 PM: A quiet Saturday night, Real Madrid had just beaten Juventus thanks to Ronaldo’s magic and the Thames flowed serenely below London Bridge. On London Bridge itself, people strolled about and revelers in the pubs nearby, downed their last mugs of beer… A white B&Q Van with yellow stripes driven at an estimated speed of 50 mph (approximately 80.5 kms) veered on to the bridge and mounted the pavement knocking some of the walkers/strollers into the water below and running over a few.

Initial reactions were that it was a case of “driving under the influence” and a few bystanders apparently even started walking up to the vehicle which had come to a halt on the South side of the bridge after having left a trail of victims in its wake and crashing into the guardrail outside Barrowboy and Banker pub on Borough street.

09:59 – 10:08 PM: Three men stepped out of the van armed with what looked like kitchen knives and went on a kicking, stabbing, and slashing spree, attacking innocent bystanders, those they had knocked down a few moments ago, and walkers – at random, cold bloodedly, and with zero compunction.

The attackers walked into the pubs and restaurants slashing and stabbing shouting “This is for Allah” Some people in the restaurants fought back gallantly hurling whatever they could lay their hands on – tables, chairs, beer glasses, and bottles in an attempt to divert the attackers attention and save lives.

It must have been a surreal, dazzlingly frightening scene with the demented attackers slashing without thought for their own lives or the lives of those they were taking – As one eyewitness recounted: “The knife was down by his side, sort of swinging it like a branch, like a 10-year-old in the woods…”

10:08 – 10:16 PM: The first call to the police was made at 10:08 PM and soon police sirens blared with officers combing bars and hotels searching for the killers and asking people to make a dash to safety. The end was brutal and quick with the police gunning down the killers at 10:16 PM, eight minutes after they received the first call, firing an unprecedented 50 rounds of bullets.

Predictably the ISIS through their affiliated news agency “Amaq” in an Arabic tweet claimed responsibility for this act of terror as well and they were not wrong. It is indeed their ideology that is at the heart of this act of terror and several others before this and the many more that are sure to come in the future.

The police named two of the perpetrators – Khuram Butt, a resident of Barking; East London believed to be the leader of the trio was 27 and a son of migrant asylum seekers from Pakistan. Butt was apparently known to the police as someone who had been radicalized. He had been named and shamed in a Channel-4 documentary “The Jihadis next door”.

He had also been reported by neighbors who complained that Butt was attempting to “brainwash”, convert and radicalize their children. He was also reported to the police by a friend and fellow-muslim alarmed at the justification and radical views Butt had started to spout.

Butt had apparently become radicalized by listening to YouTube videos of American hate preacher Musa Jibril. Despite the mounting evidence and knowing all along that Butt was a ticking time bomb the British authorities, police, Scotland Yard did nothing.

The second terrorist named by the police Rachid Redouane, 30 also from Barking, East London was not known to the police. The third terrorist (not named as yet) is believed to be a foreigner and not a citizen of UK.

Why did the police do nothing despite having at their disposal enough evidence that Khuram Butt was a dangerous man? Apparently, he was not considered a very serious threat as yet. To think that someone considered “not a serious threat” led a team of three in a killing spree speaks for how the liberal left has lost the plot when confronting and tackling jihadi terror.

The ISIS propaganda machine working overtime continues to spawn more and more “warriors of jihad” who are willing to lay down their lives in the hope of Jannat (paradise). The truth however bitter is that the ISIS is winning the propaganda war.

Further, it must be made clear that condemning “Islamism”; the theocratic ideology of supremacism that is at the root of these acts of terror is not the same as condemning Islam and/or Muslims.

It must also be said that it is no longer enough for Muslims to just say that they “condemn” the violence/terror; they have to go beyond that. The time for platitudes is over. When a “moderate” Muslim says that there is no place for violence in Islam then he/she is completely wrong because it is the twisted vision in Islam that is used by the ISIS to radicalize young Muslims.

The Muslims across the world who believe in freedom, pluralism, and true secularism must go beyond condemnation and call out the theocratic vision/ideology that drives these terrorists.

And for the liberals, as long as they continue to obfuscate and drag their feet without openly condemning the foundational ideology that spawns these acts of terror there seems to be no end in sight. The cycle of terror, deaths, candle-light vigils, condemnation, and terror shall continue.

The Story of the birth of Israel: The 6 Days War when Israel took on the mighty Arabs and vanquished them