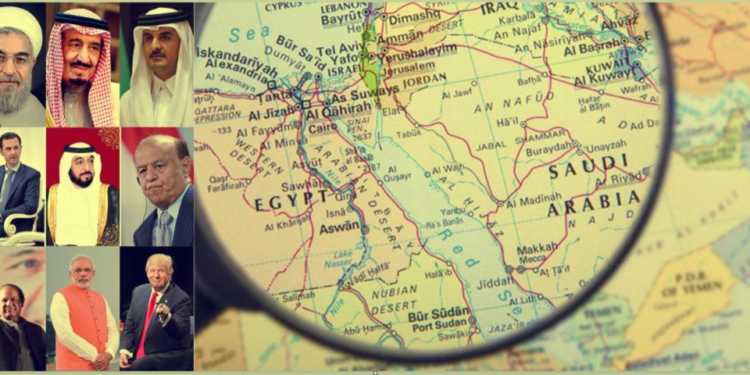 Middle East is always in news for one reason or another. It recently got embroiled in one of the worst diplomatic crisis of the region. It is more than fifteen days, since Qatar which is a tiny but rich nation is at loggerheads with Saudi Arabia. The latter has accused Qatar of assisting terror networks that are backed by Iran and snapped all diplomatic ties. Egypt, Bahrain, UAE, Yemen and Libya also joined hands with their Saudi counterparts in cutting off all relations from Qatar.

They have also accused Doha of broadcasting the Shia ideology through the state owned channel Al-Jazeera. This is not something new for the country. In 2002 Al-Jazeera broadcast criticisms by Saudi protesters led the kingdom to withdraw its ambassador from Doha for the next half decade.

During that same period, Qatar turned towards Iran and gave political and economic support to it and several of its proxies, such as Hamas, Hezbollah, and the Assad regime in Syria. Again in 2014 several Arab nations called back their diplomats over the same issue (Qatar backing Iranians) but the crisis was resolved within nine months. However, to this day the issue remains the same.

Last month, there was a news report that Qatari Emir, Tamim bin Hamad al-Thani in a speech criticised America and offered support to Iran. Not only this he also reaffirmed Qatar’s support for Hamas which is a designated terrorist organization backed by Iran. At that time Qatar officials claimed that reference to Iran in news reports was a result of hacking and Emir never gave any such statement. But all hell broke loose when Qatar Emir congratulated Hassan Rouhani for being re-elected as Iranian president.

In the past the foreign policy of Qatar has been strange. It has a United States airbase on its soil but allows its citizens to privately fund the Islamic State (according to Iraqi officials). It also claims to have good relations with Israel, but is a big supporter of Hamas which is the sworn enemy of the Jewish state. Although, it is a Wahhabi kingdom with a majority Sunni population but still has strong ties with Iran which has majority Shia population.

During the Arab Spring in 2011, Qatar threw its full weight behind various Brotherhood movements to challenge the existing order in the Middle-East. This alarmed Riyadh and the rift widened. In Egypt, Qatar backed Mohamed Morsi’s Brotherhood government but it got toppled by a Saudi- and UAE-funded military regime. Qatar has been the most aggressive backer of Islamist groups seeking to topple the regime of President Bashar al-Assad. It’s alleged that it provides indirect assistance to al-Qaeda affiliates, such as Tahrir al-Sham, through ransom payments for hostage releases.

In 2014, when the diplomatic crisis was resolved, at that time Qatar pledged to end its support for radical Islam (Wahabis and Salafi) but it all got vanished like smoke in air. It did not undertake any counter terrorism action. Therefore, the current crisis is not an outburst of some sudden explosion it takes time for volcano to erupt. Most importantly the action taken by the Arab states against Qatar came after President Trump’s visit to Saudi Arabia. He called on the Sunni states to isolate Iran.

To tell the truth , the excuse of terrorism is just a hogwash. Saudi Arabia is no saint as it backs Pakistan which is a state sponsor of terrorism. Secondly, Qatar by backing Iran is stopping Saudi Arabia from becoming a dominant player in the region.

The crisis may have both human and economic cost in the future. Although the human cost may not be visible in the short term, the economic cost is evident from day one. The unprecedented situation left Qatar’s main share index more than seven per cent lower last week amid worries about the investment climate. Oil prices have dived lower as the crisis has raised uncertainty about oil production in the Middle East.

It’s not the oil but gas that needs to have eyes fixed upon as Qatar is one of the smallest oil producers in the Gulf. However, it is the world’s largest liquefied natural gas exporter. If the crisis worsens, Qatar’s export of natural gas could be interrupted which could cripple its economy. The Arab countries have also banned their citizens from travelling to Qatar. Millions of workers from these countries, who live and work in Qatar, have been given 14 days to leave the country. Loss of that workforce would pose a problem for industries and firms operating in Qatar.

Indians are not untouched as 650,000 Indians who live and work in Qatar would also be in trouble. Indians are the largest expatriate community there and over 90 per cent of India’s natural gas imports, which come from Qatar could also be at risk. This crisis if persisted long would possess significant foreign policy challenge for India.

All this is not a good sign for Qatar. On the other side, the isolation of it would backfire; it will be a strategic victory for Iran. Not only it would divide the Sunnis but also put pressure on America. Qatar has the Al-Udeid Air Base—the largest U.S. air base in the Middle East. By isolating Qatar, the Saudis are giving the U.S. a tough time. USA would not want to lose the Saudis (key US ally) , at the same time they would not do anything stupid to lose its strategic footing in Qatar either.

Mediating is a tough job. Traditional mediating approaches such as the tested methods of bargaining and negotiation by local leaders (whose authority does not threaten the key adversaries) could work in this case. USA has called for mediation as a way out of the current crisis. An approach by the elders of the royal family deferring the authority of young crown prince can also be effective. The diplomatic rift seen today involves power structures that rely on tribal allegiance that have transcended modern borders. Most important of all its Ramadan time and forgiveness is one of the tenets of the holy month of Ramadan. All efforts are going but no one knows when success would be attained.