Why is this “Nehruvian” Journalist acting as a Chinese Agent? 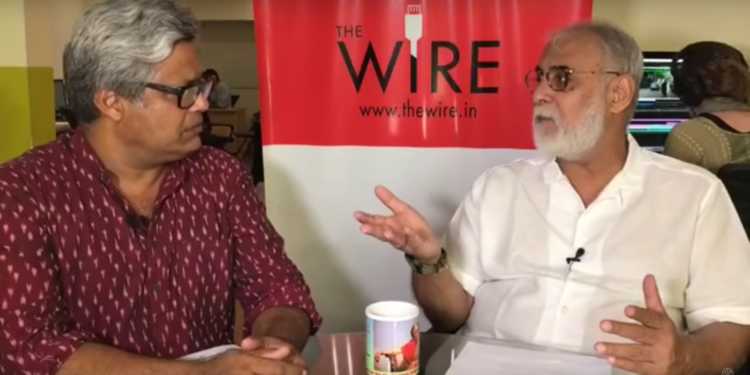 The leftist media narrative on the Indo-China face-off on the border dispute has been building up quietly but dangerously in favour of the nemesis. It is shocking to note, all the conclusions ended in favour of China, signifying our country as a third party interloper in the China-Bhutan border standoff as if India has no legitimate right or concern over the threat to our security.

This vicious narrative no doubt was aimed at PM Modi, in order to characterise him, as a war monger. So the narrative is set deliberately choosing some strategic experts who are obviously leftists in their ideology with the aim to bar our astute PM Modi and his shrewd strategies from winning accolades. A callous strategy is set in motion by the left-liberals.

The strategic expert is none other than Mr Manoj Joshi. Manoj Joshi is not free from controversies. In the past, he has written several opinion columns on Kashmir dispute hurting India as a nation and mocking our Jawan’s sacrifices in particular.

Ever since Indo-China face off on the border dispute arose, the leftist narrative has come out, as a shocker to the nation. It is not a routine opinion piece, but an exercise to extend solidarity to China, as the Marxian base in India is ideologically pro-China and pro-PLA.

It is not a conventional opinion that is forthcoming from an average or an avid political observer, but a learned one coming from a strategic and defence expert like Manoj Joshi. Manoj Joshi is by now familiar with his controversial anti-India opinions on Kashmir.

Manoj Joshi is a Nehruvian in thoughts, an ardent supporter of Jawaharlal Nehru and guardian of his policies. So it was an obvious decision of the UPA-I then, to pick him for NSC Advisory Board in 2004.

Ever since Joshi and Siddharth Varadarajan (The Naxalite spouse Nandini Sunder fame) teamed under the ‘Wire‘, which was partly funded by Rohan Murthy of Infosys, in 2014, their agenda was unboxed. It is generally believed that Dr Subramanian Swamy‘s attack on Siddhartha Varadarajan’s US Citizenship, made him resign from The Hindu, but he was already part of a big Leftist team to counter Narendra Modi, who just was victorious in the General Election 2014.

First, Manoj Joshi wrote an analytical piece in the Guardian on Indo-China standoff on the border dispute. Later in his chat show on The Wire, he fully blew up and completely turned Judas.

He wrote a piece last month in the Guardian on China-Bhutan-Sikkim border. He acknowledged the fact that former PM Atal Bihar Vajpayee’s 2003 China visit made China recognise Sikkim as an Indian State, but now Joshi turning tables saying ‘China may well question Sikkim’s annexe to India’? Why this duplicity?

Manoj Joshi and Venu concluded that the border dispute was between China and Bhutan, and Indian Army personnel should withdraw from Bhutan borders and encourage China-Bhutan to settle the row. This is ridiculous and dishonest on the part of the panelists. This is a deliberate act of overlooking India’s genuine apprehension of the security threat the ‘road construction’ would pose in future if allowed to complete.

India has a clear stand and justifiable apprehension that allowing China to build Roads in ‘Doklong’ area may endanger the Siliguri corridor, a narrow passage which connects India’s mainland with North East, which is also known as Chickens neck‘ junction. This is a genuine concern of India.

Instead of extending proactive support to India’s stand, the way Joshi expressed the view that India should withdraw its personnel from the Bhutan’s border with China is misleading and deceptive too. This narrative by Manoj Joshi is clearly aimed to disgrace Modi’s swift reaction to China’s encroachment into Bhutanese/Sikkim territory.

Manoj Joshi has hinted that if India feels India’s Siliguri junction is threatened by the Chinese Road construction, then China may also think that the Chumbi Valley is too vulnerable from their point of security and threatened. This expression is shocking indeed.

At the outset, India is not making any road constructions near or in the disputed territory near Doklam Plateau or nearby for China to feel threatened. Where is the provocation from Indian side for China to feel threatened? Why Joshi put words in Chinese mouth? Neither India nor China did talk of Chumbi Valley any time in the past? Why Manoj Joshi now has to ping about the Chumbi Valley? When compared to the Doklam plateau, Chumbi Valley is a huge Valley. Why this voyeurism on the part of Joshi? It is almost hinting the Chinese and certainly creates further fear among the Chinese officials. This team at ‘The Wire’ is clearly providing water to our enemies mills.

The irony is China till now never uttered a word on Chumbi Valley or questioned Sikkim’s annexation to India. Why is Manoj Joshi arguing on behalf of China?

Is it not an attempt to undermine our military strategy? Is this not an act of helping our enemy China at the embarrassment of India? Is not Joshi aware China is a country of bullying tactics and a nation of aggressions? Has he forgot China’s past history of invasion and occupation of neighbouring countries. The Chinese occupation of North Vietnam cities, Chinese occupation of Tibet, Chinese war with our own country in 1962, which lasted over a month, and met with a humiliating defeat under Nehru?

The real fact of the geography of the disputed area is something very strange. It puzzles every one of us when Joshi keep describing the locations and it’s distance from our ‘tri-junctions’ etc Joshi’s support to China, a country well known for its bullying, aggression and intrusion attitudes, is dreadful and on the other hand casting aspersions on our own country, which is peace-loving with a history of no aggression or invasion of neighboring countries, but always at the receiving end of terrorism from across Pakistan and constant bullying from China.

Joshi says even India can occupy Chumbi Valley! He further said that China can even question our annexation of Sikkim, which is a settled matter and accepted by China in clear terms before our former PM Sri Vajpayee in 2003.

Extension of Chinese road from Doklam area to the next ridge- Jampheri ridge is the real issue. Doklam is different area and also far from the scene. So how many Indian media houses did extensive research on this? They all ended up publishing a short and biased version of the conflict. While watching the Wire Video chat with Manoj Joshi explaining things, with a map of the area of China/Bhutan/Sikkim/part of West Bengal, it is all confusion, only confusion. Why is India concerned about the extension of the road construction by Chinese in Doklam plateau up to tri-junction? Simple!

Chinese Army can’t reach tri-junction via a 3000 m Chumbi valley, with their junta with cargo. It is literally an uphill task. So extending their territory road from Doklam Plateau is the best way out. So a road has to be built on the ridge of the valley aside, along with the border with Bhutan. So a slight encroachment inside Bhutan all along the road construction area is necessary. This is how they started the road extension work, this is where Bhutan complained and India interfered.

Why should India be alarmed? Because the road was approaching the Tri-junction. What if the ‘road’ reaches tri-junction?

The rail and road networks passing through tri-junction from India’s mainland feeds the primary military deposits located in the North East which will counter China during a conflict. So if this corridor in any eventuality is blocked the entire military supply to NE states will be cut off. Hence this could be the China’s larger plan to defeat India on our own soil in the event of an armed conflict with China.

So the road construction is a multi-purpose onslaught of China:

1) It ensures a permanent headache to Bhutan along the line of the new road.

2) It can constantly nag the Bhutan to submission.

3) China’s ultimate aim is to cut off the entire North East States of India from the Indian mainland so that in the event of a conflict with China, India has to lose the vital military logistic movements on road supply to NE camps.

Why Sri Manoj Joshi the expert and his team at The Wire, are not concerned about this plot of China? In their blind resentment to Modi, why this team is watering the enemy’s plants? Since Manoj Joshi is an ardent supporter of Nehruvian policies and so to what extent can he support Nehru’s flawed Chinese policy? What answer does he have when Nehru has rejected the idea to occupy Chumbi Valley of Tibetan region in 1950 , when China occupied Tibet to the shock of the International community?

Does this team at The Wire, expect our PM Modi to follow the Nehruvian pusillanimity even today, despite China posing a grave threat to India’s integrity with their master plan of severing the North East states off from mainland India?

No right wing or left wing ideology can shape or influence India’s security concerns. Our security is above from any ideological affront. Our security strategy can be influenced only by ‘nationalism’ nothing else. India’s Marxism and leftist ideology is etched with loyalty to China. Hence patriotism is taboo for them.

Under what circumstances would North Korea use nukes?

India is all set to Confront the Chinese, USA and Japan will be on India’s side