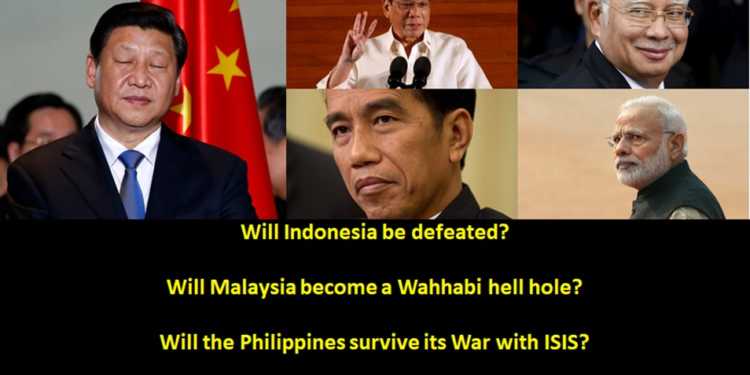 It was a daunting task.

Never before in history had the islands of Indonesia, then lumped within South East Asia by Indian navigators and scholars as ‘Chakravala Mandala Dvipantara’- “The Circle of the World of Channels between Islands”, been united under a single ruler.

But after decades of constant naval warfare, Gajah Mada succeeded in his self-appointed task-laying the foundation of the Mahajapit Empire, the first Indonesian Empire, and the concept of ‘Nusantara’ – Pali for “Within Islands’ or as it would come to mean in Javanese, “Archipelago”. For the first time, the Indonesians had a State as well as a true Name for their own.

It is probable that this was at the back of the mind of Arif Havas Oesgroseno, the Deputy of Maritime Sovereignty of the Indonesian Ministry of Maritime Affairs when he declared the decision of the Indonesian Government to rename the South China Sea on Friday: “We want to update the naming of the sea we gave a new name in line with the usual practice: the North Natuna Sea.”

While unlike Countries like Vietnam and the Philippines, Indonesia has long stated that it has no maritime disputes in the South China Sea- of which Beijing illegally lays claim to more than 90%, Indonesian diplomats had repeatedly taken offence to China over fishing and oil exploration rights in the region. Further, Indonesian officials have long been irritated by Chinese attempts to claim even more territory by illegally building artificial islands in the middle of the Sea- thus indirectly trying to capture the Natuna Islands, ruled by Indonesian powers for centuries as well as the colonizing Dutch later. Though open acrimony has been missing until recent times, less than two years ago, the Spokesman for the Indonesian Foreign Ministry, Armanatha Nasir had accused China of disobeying International Law, stressing that “we do not recognize the nine-dash line because it is not in line with … international law.”

In response, the Chinese have decided to drag out ancient maps of dubious values, laying claim over South China Sea, Natuna Islands, and- knowing the Chinese creativity when it comes to making absurd claims- presumably Nasir’s own office in Java as well.

Even though in April 2012, WikiLeaks clearly released documents proving that “a Chinese Ministry of Foreign Affairs official and a local scholar could not identify specific historical records to justify China ‘s claims”. It is highly likely that a lot of Chinese ‘history’ is a forgery, pushed by CPC tools.

The Chinese have no claim to these territories but dubious and clearly fake maps they claim to be millennia old- and naked military force. They are further assisted in their illegal claims by all sorts of puppet sates and colonies such as Pakistan and Laos- something we at Rightlog have been warning about for months. Also helping the Chinese are various communist and Islamist groups all over Asia.

However unlike India’s Liberals and Communists- the Indonesian s clearly aren’t enthused with Chinese lies.

Last year, the Indonesians and Vietnamese buried their differences at Singapore to get ASEAN member states to release a joint statement from the bloc, warning that developments in the South China Sea could “undermine peace, security and stability”. In recent times, they have even decided to put an end to fishing controversies- which in the past, led to arrests of each other’s fishermen- to present a united front to China.

They further criticized Chinese military aggression in the area as well as the building of artificial islands to illegally take over Sea territory. 2017 has seen more interesting moves. Merely two weeks ago, Vietnam extended an ONGC Oil exploration concession in the Area. The Vietnamese National Firm, PetroVietnam, has been even bolder- defying Chinese tantrums to drill for oil in the Sea. Last Wednesday, the Philippines Energy Resource Development Bureau- deviating from the until-now neutral outlook of the Duterte government- declared that it was removing suspensions on Oil & Gas Exploration forced upon it by the Chinese. Other nations such as Brunei, Malaysia, and Taiwan have also been antagonized by the Chinese- who have been violating territorial borders, harassing local fishermen, and even destroying remote ASEAN-controlled areas such as Coral National Parks.

In addition, the ASEAN states have been militarizing rapidly.

Pirate activity in the Straits of Malacca are being cut down. Indonesia and Vietnam are acquiring new weaponry- such as Indian BRAHMOS< a Supersonic Cruise Missile for which the Chinese have no counter. Duterte’s belligerence is well known and the several ASEAN nations are putting out feelers to Democracies in the region such as India and Japan.

Here we can well appreciate the far-sightedness and preparedness of the Modi Government after the diplomatic doldrums of the Ten UPA years. The Diplomat writes: – “Not long after assuming office Prime Minister Modi launched a “Neighbourhood First” initiative designed to buttress India’s strategic position in the IOR. This quickly manifest in a series of high-profile visits and military agreements with India’s island neighbours as well as a renewed commitment to resourcing the ANC. In 2015 Mr. Modi unveiled a ten-year, $1.5 billion infrastructure package for the Andamans, including a recommitment to double the number of naval patrol craft to 32 and army personnel to 6,000. In January 2016, Delhi approved the rotational deployment of advanced, U.S.-origin P8-I Poseidon maritime surveillance patrol aircraft and Israeli-origin unmanned drones through the ANC. In March 2016 the ANC received new landing craft and interceptor boats from the Indian Coast Guard. In April 2016 India dispatched a guided-missile corvette, the INS Karmuk, to the Andamans in what appears to be the first permanent deployment of a major surface combatant to the command. Around the same time the Indian media reported Delhi and Tokyo had begun discussions to install a “sea wall of hydrophones” in the IOR which would assist in the tracking of foreign submarines. Last month the Indian Navy announced its first indigenously-developed floating dock would be deployed to the ANC.”

Neither are these the only suspicious events to have taken place. We at Rightlog have earlier warned that the decline in Chinese fertility and productivity will lead to Beijing becoming more and more aggressive in recent years, possibly reaching a Flashpoint in or shortly after 2025. As sign of this aggressiveness, we can see initiatives such as their CPEC project as well as the establishment of Chinese military bases in Africa. Further, is the curious friendship of the CPC and Islamists all over the Globe. The support of China for Jihadis attacking India is well known. But recent months have also seen ISIS attacking the Philippines and fighting against heavily-armed Military as well. How did mere terrorist acquire such powerful weapons & intelligence?

Heavy Activity of Islamic terrorists has also been reported from Thailand and Burma- as well as growing Sharia law in parts of Indonesia whose culture is heavily Hindu and where Hindu gods and heroes like Shri Rama, King Vishnuvardhana, and Gaja Mada are honoured. Malaysia is quickly becoming Wahhabi- even faster than expected- and oppression of Indians in the area has become common. Recently a temple of Skanda- worshipped by the predominantly Tamil population of Malaysia as Murugan- was under threat of vandalism. Even Vietnam- which has no Muslims- is facing threats from rebels.

Funnily the only ASEAN states free from Islamic problems are Laos- a defacto Chinese colony now- and Cambodia- which is already being threatened into submission by the Chinese.

No wonder in 2016, former Malaysian leader, Mahathir Muhammad had warned very frankly, “Can ASEAN go to war with China? We are dealing with a very powerful country. We can’t tell them ‘look, don’t do this, don’t do that, or I will bash your head… It’s going to be the most powerful country in this world, more powerful than the U.S.’

The Chinese threat is dire and terrible. The Chinese will only be satisfied with the conquest of all sea. Like the barbaric and savage Imperial Japanese of World War II, they are clearly willing to drown all Asia in blood to gain power. The great Majahapit Empire created by Gaja Mada ultimately fell to Chinese invasions and Chinese-funded Islamic jihads- leading to the creation of the current Islamic Indonesia.

Will history repeat? Will peaceful united Indonesia be again reduced to a warring mass of Islamist tyrannies? Will Malaysia become a Wahhabi hell hole? Will the Philippines survive its War with ISIS?

Will our beloved Bharata survive the coming Chinese Storm- a horror as dire and terrible as the wars of the Dragon Vritra in the Rig Veda?

We don’t know. All we can do is prepare.

The Only Subject where Donald Trump has an Anti-India stand