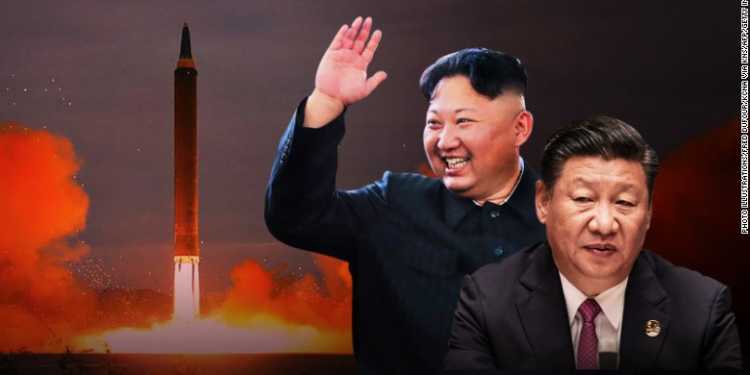 When Former US president George Bush had made his famous state of the union address in 2002, he had mentioned the infamous axis of evil that was supposedly threatening America. Iran, Iraq and North Korea made into his list of enemies. Saddam Hussein actually had no weapons of mass destruction and was taken out by the US military. The other two members of the axis of evil now have grown themselves formidably under the guise of an inert and lackluster Obama administration. Iran nevertheless was brought on to the table to broker a peace deal with a six nation delegation. However, the emergence of Trump in the White House has reversed that with a fiery exchange of words between the two adversaries.

Iran is undergoing its own transformation in its quest to become the first Islamic nuclear nation in the Middle East. But it is still not close to the audacity that was displayed by North Korea quite recently. It is said action speaks louder than words. With Iran, Trump had only manifested verbal punches and fights. North Korea has steered out of control. Their diatribe of threatening the United States was met with a nuclear weapons test (detonation of a hydrogen bomb precisely) that has sent the world into a tizzy. The war of words quickly escalated into a full blown crisis. As the international community tries to douse the fire, there are few options in the pipeline which can be exhausted to contain the despotic regime in Pyongyang. North Korea tested the weapon and a minor earthquake was detected in the region but its aftershocks and ramifications were felt in every nook and corner in the diplomatic community of the world.

The biggest drawback or a block in dealing with North Korea is its isolation from the rest of the world. With regards to Iran, a solution and negotiations could be fructified via nations that could hold a diplomatic conversation with Tehran. Kim Jong Un is made of a different despotic cloth of isolation where he harbors no diplomatic engagement with any country other than China. There is no doubt about this assertion that North Korea is a satellite of Chinese strategic interests in the region. And the proxy overturns of North Korea are very visible in the larger scheme of geopolitical things.

What can be the solution to this fresh crisis? There may be few diplomatic options on the table. If military option has to be thwarted, certain diplomatic squeezing can be thought about to defuse the simmering standoff in the Korean peninsula.

As mentioned before, China is the centerpiece of North Korea’s connections to the world. In order to diffuse the crisis, Peoples Republic of China has to be the core of all diplomatic options that will be applied over North Korea.

For starters an embargo might work. Persuading China and the United Nations Security Council to cut fuel and oil supply to the North may actually cripple them into submission. Tough economic sanctions can be pursued. The Chinese have not done much in this perspective and much more can be expected from them in this regard. China is Pyongyang’s main trading partner and here it would be easier to convince the Chinese into enforcing the embargo. Since North Korea has relationship with only one nation, this would not be very difficult to apply. Nevertheless, the Chinese cannot be really trusted blindly in to the same.

The U.S. should act harder on Chinese banks and firms hobnobbing with North Korea. The U.S. has already blocked a Chinese bank and several Chinese and Russian firms. Blockade of all the foreign banks that have North Korean ties would asphyxiate their financial baggage and economy which is already reeling under innumerable problems.

The biggest diplomatic punch would be stopping aid and food supplies to the dictatorship imbibed nation. This perhaps may be the cruelest diplomatic deed to stop their nuclear bonanza as innocent citizens with women and children will die and the general population may be affected. However, tough sanctions like these may bring them onto the knees. Kim and few of his boot licking cronies enjoy an extravagant life leaving the general population to starve. Under the midst of a record famine and cancellation of food supplies can together hopefully bring Kim around. Again there is a subtle possibility of this may back firing in consolidating more power to Kim and he may blame it on the west for any humanitarian crisis that may unfold as a result of the fallout. Rather than expecting people to revolt it may back fire into centralization of more power into the hands of the dictator. Nevertheless, a deal can be made to give up nuclear arsenal and invite UN inspectors in exchange for food supply and better aid.

One of the long term diplomatic solutions for this crisis in Korean peninsula would be exploring the option of making South Korea nuclear. On the flipside that would be making the whole region nuclear but at least the threat of it may make North Korea retreat. The positives of this long term strategy could erase dependency of Tokyo and Seoul upon the America nuclear envelope. If Kim boasts a nuclear laced ICBM that can strike U.S. cities, he could aim an attack on Seoul which would not bring an American response in the wake of a nuclear retaliatory attack on say an American city on the west coast. Letting Seoul have nukes would impede Kim Jong’s ability to scare the other Korean nation.

The American retort to this development should show the same hyper activity it unleashed in the international community then against Iraq. That was a manufactured need of the hour; this is by default a factual need of the situation. The model of ‘coalition of the willing’ that was formed to remove Saddam with likeminded countries in 2003 needs to be replicated and replaced here with a foundational robust association between countries and the UN security council.

Kim Jong Un has termed cunningly the hydrogen weapons test as a ‘gift to the US’. Nothing can be more than a ‘gift of relief’ to the world as hopefully a peaceful solution but not military action will be in sight and a roadmap for de escalation will be in horizon.