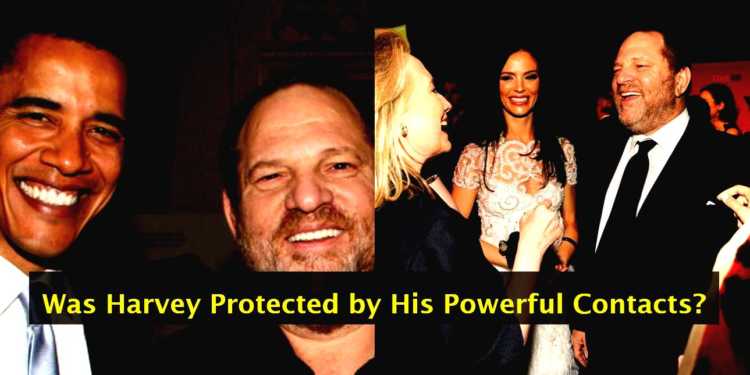 “I’ll never have to suck another cock again.”
-Marilyn Monroe (After she signed a major contract in 1955)

As one Hollywood actress after the other comes out and reveals their harrowing encounters with Harvey Weinstein, one wonders whether there is a single actress whom Mr. Weinstein has not laid his hands on.

His modus operandi was strikingly similar in almost every case, it involved Weinstein getting into a bath robe and invite actresses on the pretext of taking auditions or business meeting in his hotel room and then subsequently asking for a “massage.” When someone tried to escape, either she was raped like in the case of Rose McGowan or her acting career was finished like in the case of Dawn Dunning.

Exceptions to Weinstein’s antics was Gwyneth Paltrow who confided in her then boyfriend Brad Pitt, who later warned Harvey Weinstein to back off. However, not everyone was lucky enough to have Brad Pitt as their boyfriend and those who didn’t, fell into the trap of Harvey Weinstein.
(https://www.theguardian.com/…/the-allegations-against-harve…)

As one actress after another fell into Harvey Weinstein’s trap, meanwhile Weinstein only grew more powerful as his movies(the Kill Bill series, Inglorious Basterds, The Artist, Pulp Fiction to name a few) swooped almost all the awards at the Oscars. Shockingly instead of rooting out Harvey Weinstein, the American media instead portrayed him as a champion of Women Rights.

Yes, Harvey Weinstein ,the sexual predator, used to enjoy the status of a feminist once.

His company distributed a feature concerning the subject of campus sexual assault and also participated in a women’s march. But the thing that clinched his feminist image was the fact that he gave Malia Obama an internship and also helped raise funds for Hillary Clinton’s campaign to become the President of USA. Yes, the Hillary Clinton the supposed David to Donald’s Goliath. Mind you, from Obama to Hillary almost every Democratic candidate has coveted his endorsement. She has gone on to condemn Harvey Weinstein but questions must be asked that with all her resources, was she really unaware of the Hollywood’s “open secret” or did she choose to ignore it to further her political agenda? Did she really get no hint when Seth MacFarlane joked while reading out the nominations for Best Supporting Actress that the supporting actresses would no longer have to pretend to be attracted to Weinstein.
(http://www.huffingtonpost.in/…/seth-macfarlane-harvey-weins…)

Hollywood has a long history of such cases and Weinstein certainly won’t be the last one. It all started with the founder of MGM, Louis B Mayer who was notorious for his casting couch incidents. He was politely dubbed as a womanizer by the media but in reality he was no better than Harvey Weinstein. Trading sexual favours for starring roles has long been a norm in the Hollywood for budding actresses. It’s surprising enough that strict actions have been taken against Weinstein as Hollywood has a long history of rewarding such sexual predators. Roman Polanski, a convicted statutory rapist, was awarded an Oscar and till date remains to hold a seat at the prestigious Academy Awards inspite of the recent allegations by a women who accused Polanski of sexually assaulting her when she was just 10.

Bill Cosby, Roger Ailes, Bill O’Reilly and L.A. Reid are the other famed few who have been protected under Hollywood’s veil of secrecy.
(http://www.returnofkings.com/…/hollywoodhas-always-used-th…)

The culture that breeds in Hollywood is the root of all problems. In recent years, they have been trying to desperately push the Left leaning narrative which has seen the famed Oscars getting increasingly political and lecturing us on Women’s rights and equality. So much for irony. The hope in the industry is that the alleged abhorrent behaviour by Weinstein and the other perpetrators will trigger some genuine soul-searching across the entertainment business and beyond. But is the Hollywood ready to change?

Will this sexual abuse scandal, arguably the biggest in Hollywood’s history, force the industry to change and adopt a zero tolerance environment where it will not be possible for the rich and powerful to prey on the budding actors? One can change rules, laws, policies, but if the culture of Hollywood or the culture of any industry is essentially designed to protect people like Harvey Weinstein, then those laws and rules don’t matter. Whenever someone tried to investigate Weinstein’s antics, the media house used to be coerced by Weinstein to root out all the negative stories and in return rewarding them handsomely with favours or in some cases with the threat of litigation. But Weinstein was beaten by the new age social media over which news spreads like a wildfire and over which he has no control. Facebook and Instagram are the biggest reasons for his demise with number of actresses using these domains to expose Harvey Weinstein.
(http://variety.com/…/harveyweinstein-game-over-judgment-d…/)

Perhaps the reason why people like Harvey Weinstein grew so much powerful is because they hold the keys to people’s dreams which sends a message that people will have to give in to him and stay silent for the sake of their careers, fully knowing that one call by Weinstein would end their career for good. Not just Hollywood, things back home aren’t that rosy either. Priyanka Chopra said that Bollywood is not free of Harvey Weinsteins either and hopefully, Bollywood’s Harvey Weinstein’s will also be rooted out. It is important that the buck must not stop here. Such sexual predators are out everywhere and Hollywood must root them out or else face extinction. Will someone really buy expensive tickets of movies whose producers, directors and actors freely exploit women and on the other hand lecture us on Women safety?

A system must be created where the cost of silence must be greater than the cost of speaking out where the blame is finally shifted to the bully instead of the victim. If this system had been created before, Harvey Weinstein would have been stopped right in his tracks two decades ago. Hollywood must speak up and out other sexual predators. Silence has never been more deafening.