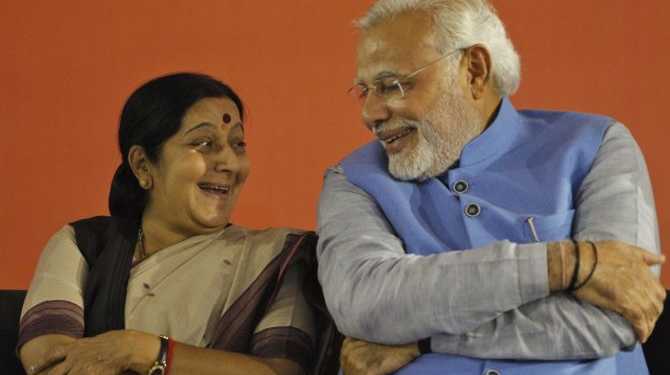 ‘Karvate badalte rahe – Saari Raat hum’; in his grave Churchill might be humming this Hindi song and while rolling uncomfortably. Had he lived to see this day, he would have scurried to his coffin and bolted it from inside. After all contrary to his predictions, here is an Indian government that could ‘push’ Britain down at the international altar.

For the first time since its inception, there would be no representation from the Great Britain in the “International Court of Justice”. Whether this is seen as diminishing influence of UK or rising influence of India, either way this marks a milestone moment in the continuously sliding and shrinking Empire.

That “The Guardian” termed the election an acrimonious competition, in a cleverly worded subtle message that hints at the ‘loss of prestige’ for Britain and highlighting how much painful it is for the elite, aristocrats of the bygone era. Gone are the days of the arrogant tone that set the dialogue between the ruling British and Indian subjects.

For the records, Indian nominee for ICJ Justice Dalveer Bhandari received 121 votes against 68 votes of the British candidate in the United Nations General Assembly. However, the elite club of United Nations, UNSC supported Sir Christopher Greenwood.

This only explains how the elite club that has more powers vested with few elite nations in perhaps the most arbitrary manner still stuck to support one of their own. UK received 9 votes while India got only 5. Though it is a norm that the candidate who wins in UNGA is supported by UNSC, UK made it a point to turn the election into ‘an acrimonious competition” – only to realize that much water has passed under the Westminster bridge and India has evolved from non-cooperation movement to coercive diplomacy, that was a strength of the English of yester era. Yet, UK’s nominee to ICJ, Greenwood’s past highlights the arrogance of UK – considering that fact that he was the one advised to use force against Saddam Hussain. Maybe he is the best the Brits could offer.

Instead of recognizing and respecting the UNGA’s decision that represents the whole of humanity, UK wanted to force a joint conference of UNGA and UNSC to force an open vote. This was a ploy to force many small countries whom the Brits still consider their subjects to oppose Britain so they can be dealt with appropriately in the future.

On the other hand, India ridiculed the attempts of UK to have a joint conference citing a rule that was exercised only once – and that too almost a century ago; 96 years to be precise. Syed Akbaruddin, Permanent Representative of India to the UN flayed the UK attempts and called it an attempt to push the UN back by a century, while UN was trying to get itself upgraded to 21st century.

The fact that UK had finally withdrawn candidature only proves that even its staunch supporting elites couldn’t digest the barbaric twist of international protocol. Of course, there is also a talk about how UK cannot antagonize India, which is expected to be a major trading partner post Brexit. Confirming the Brits mean business, UK offered an olive branch and expressed pleasure that a friend like India is replacing them in ICJ.

This is second time UK faced a situation and lost face in recent months. In June this year, UK was defeated 94-15 in a Mauritius proposed resolution to refer the matter of Chagos Islands to ICJ. In that episode it was observed erstwhile EU friends no longer supported UK on something as remote as Chagos Islands.

While Narendra Modi congratulated EAM Sushma Swaraj and the team of officers for “re-election” of Justice Bhandari to International Court of Justice, even the establishment in Pakistan sits tight and notices the event. Well, they now have to explain the episode of Kulbhushan Jadhav to the international jury in which an Indian continues to be present.

How Justice Dalveer Bhandari overcame all obstacles to get re-elected to ICJ?

We are giving you a little Glimpse of Mugabe’s Regime in Zimbabwe. It is Terrifying