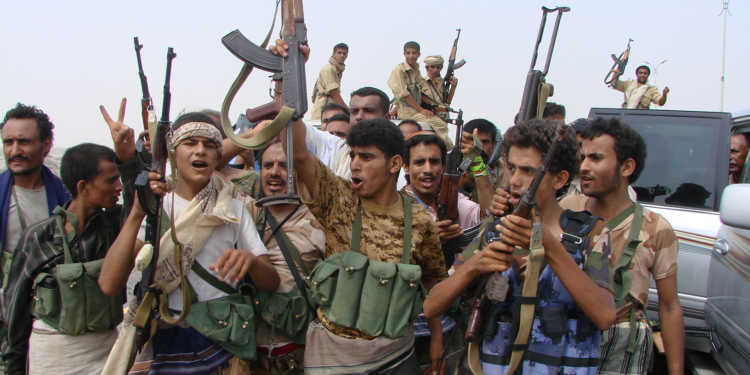 In this handout photo provided by the Yemen Defense Ministry, Yemeni army soldiers and tribesmen loyal to the army celebrate after they retook the city of Zinjibar from al-Qaida militants, in the city of Zinjibar, Yemen, Tuesday, June 12, 2012. Yemeni troops backed by armed tribesmen routed al-Qaida on Tuesday from two southern strongholds the terror network had held for more than a year, the most significant victory so far in a monthlong offensive against a local franchise that has tried time and again to bomb U.S.-bound planes. (AP Photo/Yemen Defense Ministry)

Two days ago, the Saudi Prince Bader spent an unprecedented $450 million at New York on a Leonardo da Vinci painting. Over the past two years, his government- the Islamist tyranny of Saudi Arabia- has rendered over two million Yemenis homeless by carpet-bombing entire cities, and driven almost nineteen million people into starvation and want by blockading ports, destroying agriculture, and destroying roads.

The Saudis are stealing. Yemeni resources and oil, appropriating Yemeni funds- all under the sanction of Western ‘Financial Institutions’, and committing genocide in all but name.

Even by the usual double standards the Liberals and the Media maintain when it comes to Islamist atrocities, the current hypocrisy is astounding. Israel is being criticized for bringing into the Mainstream what has been known for thousands of years- before Christianity and Islam were invented- that Jerusalem is the holiest city and political capital for Jews. The Filipino President Duterte is being branded a mass-murder for trying to protect his people from drug-smugglers and Jihadis. Closer home, not a day goes by without a fresh atrocity committed upon Hindus while Liberals justify it by penning absurdities. Only recently, an article by a famed woman scholar from JNU went viral, which opined that ‘Mohammedan architecture was better than Hindu architecture since its dome and arch were reminiscent of Classical architecture’- a very curious statement to make, since the very rest line goes on to attack Western scholars for ‘communalizing’ relations.

If only Ala-ud-din Khilji hadn’t listened to the vile time-travelling Tommy Robinson; maybe Indian history would have been different.

Such sort of historical revisionism is the norm among Liberals- both because it weakens the resolve of the locals and helps comfort Western hypocrites as they cheerfully fund the genocide of entire nations.

Consider the case of the Houthis. International media coverage- sparse as it is- has repeatedly harped on lies about the Houthis are ‘feudal barbarians’ who are trying to destroy the ‘multi-cultural’ Yemeni nation, about how they are committing war crimes on the local Sunnis, how they are hand-in-glove with Iranians, Russians, and whoever happens to the latest enemy of the Free World- defined by the neo-colonial West and Islamist Theocracies of this unjust Kali Yuga. The Houthis are so hated by Liberals that they might as well be long-lost Hindus.

In reality, the Houthis are Zaydi Shia who have retained several aspects of the original Yemeni culture- that of the Jewish Himyarite State and other Yemeni kingdoms- as supposed to the more ‘Arabic’ Sunni Islam all around their lands. Even their Shia allies from Iran and the Lebanon admit the Houthis have a record for brutality and barbarism that only a few- such as the local Kashmiri Jihadis- can equal.

However even with their penchant for brutality and ideological fanaticism, they are no mere Iranian puppet, but are a very distinct organization which started out around thirty ways to encourage peace and cooperation in Yemen. It only turned into a sectarian armed force in response to the brutal suppression of its activities by the then Saudi-backed Ali Abdullah Saleh- known in the region for his corrupt and blood-soaked dictatorship. The conflict went on for years until the Arab Spring convinced all factions to try a more peaceful political process. At one point, the general plan was for Saleh to step down in favour of Saleh’s long-time deputy, Abedrabbo Mansour Hadi, to step in a transitional President to usher in a democratic Yemen.

Of course, such a change in the winds would’ve been anathema to the myriad Islamists across the World.

What followed a series of betrayal and counter-betrayal that led to an alliance between Saleh and the Houthis against the Saudi-led Gulf Cooperation Council (GCC). In 2015, the war started again when the Saudi military, their usual Islamist friend, and their ‘valiant freedom-loving democratic’ puppets invaded Yemen to ‘defend Democracy and Human Right and whatever nonsense Liberals are fond of parroting…

In reality, the Saudi War was a farce from the start. Between the Houthis and Saleh, Yemen was mostly united with over 80% of the Yemeni Army and the entire Government supporting Yemeni sovereignty. The rest- as many commentators would point out- were in all likelihood Saudi-funded extremists. Even now- after the collapse of Central Authority- Al Qaeda and other Sunni groups have taken over most of South Yemen.

So how were the Saudis to win Yemen?

By ensuring there are no more Yemenis.

Already most Yemeni cities have been bombed to dust. Farms and orchards all over the country have been carpet-bombed by Saudi and other Islamist nations’ places. Even cultural and architectural remains haven’t been spared. Saudi bribery and threatening families of Yemeni officials led to early success- but as most of them have died or fled, even that tactic has failed. The recent deal with Saleh- where the ex-Yemeni President had patched up his differences with the Saudi Princes- ended when the former was assassinated and his forces mostly decided to continue with the rebellion.

It is well known that the Saudis destroy Christian, Jewish, and Roman temples and palaces in order to erase their pre-Islamic past; clearly by destroying important Yemeni heritage like the Marib Dam or the Sheba Place, they mean to convert the country into another Pakistan. A major cholera epidemic broke out in the country recently due to lack of proper water supplies and medicines- blocked by the Saudis- with over 1 million cases in a nation of a mere 29 million. Thousands died. The valiant media, as usual, is busy at work covering up Islamist atrocities; a 2016 Al Jazeera report said a mere 10,000 Yemenis had been killed in the War- even as entire cities were being bombed by the Saudi air force. A year on, the same 10,000 lie was being repeated ad nauseum. In reality, estimates of the Yemeni death toll go up to over 600,000 people, maybe even 1 million.

This is the single bloodiest war in over 30 years.

As described earlier, the Free World- free by virtue of hypocrisy, Islamism, Financial manipulation, neo-Colonialism, and control over Media- has been busy covering up the Saudi-inflicted genocide. Recently the most prominent cleric in Iraq, Muqtada Al-Sadr requested the Saudis to end their War in Yemen- to instead attack Israel. Similar offers- but with India and Hindus as the target- have been floating around in the Indian Continent. Meanwhile the Muslim intelligentsia maintains complete silence on the millions dying and suffering at the hands of their fellow Sunnis while crying hoarse over some long-destroyed eyesore an Islamist tyrant built over one of the most important temples of Bharatas.

The Yemenis might be poor and seemingly irrelevant to the grand scheme of things in the Free World. Nonetheless, even as the aged snake tore down the corrupt kingdom of frogs, the Yemeni example might bear tangible fruit which might benefit us. The Frog King was merely vain; the Saudis buy paintings and yachts worth billions even as they pile crime upon crime.

Above all, Dharma will prevail- as it always will. Will Bharatas- degraded and diminished as we are- or the bodies masquerading as our Government- such as they are- rise to the occasion?

Putin is Not Retiring from Russian Politics. He is Coming Back, Mightier than ever!