India’s ISRO and Japan’s JAXA are Coming Together 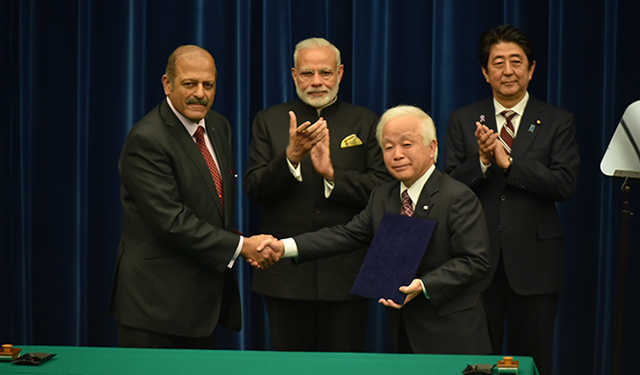 ISRO has offered ample reasons for India and Indians to cheer even in the bad times. There was a period when nothing went right for the country, some news under the headings of ISRO served hope to the countrymen. If we are one of the nine to reach the moon and only the fourth on Mars, the credit goes to the world-class space agency of this country. Lately, India astonished the world with cheapest Mars mission.

With all this on hand, latest comments from ISRO chairman will give you another reason to rejoice. In his statement, AS Kiran Kumar has said: “the space agencies of India and Japan are both working together for looking at the possible future cooperative mission.” The statement further holds significance for the fact that Japan is the only Asian country after India and China to register its presence in the space.

In his comment, Kumar further mentioned that the discussions are underway between India and Japan on making the use of space segment to seek inputs on the weather-monitoring parameters and also on a joint lunar mission.

At this point, it is essential to consider the previous space ventures as well as the history of Japan Aerospace Exploration Agency (JAXA). With the headquarters in Tokyo, the agency was established in the year 2003 with the merger of the Institute of Space and Astronautical Science (ISAS) of Japan, National Aerospace Laboratory of Japan (NAL), and the National Space Development Agency of Japan (NASDA). The mentioned organizations were responsible for different sections of space research and with a merger, the three came together to explore the undiscovered paths of the space.

Although the reach of Japan has always been restricted to the inner solar system and JAXA failed at times but it was quick to learn and improve. To its credit, it has many space programs in launch development and missions, astronomy programs, lunar and interplanetary research programs, earth observation, and communication and positioning.

Emphasizing on the cooperation between India and Japan, Mr Kumar has hinted at the prospects of the future collaboration. “We are looking at a future for a possible joint lunar mission. In future, we will also be looking at how we can make use of this relationship for generating more input for climate change studies.”

While the ISRO ‘s achievement needs no introduction, Japan has been considerate in its Astronomy and Earth Observative Programs.

JAXA’s programs catering to Infrared and X-Ray Astronomy as well as the rainfall observation and monitoring of Carbon Monoxide have attracted the attention of enthusiasts across the globe.

The outcomes can be seen in cheaper space access for a quest to generate power and colonise the other planetary bodies in the space. Although the plans are in the initial stage, the long-term results of this collaboration between India and Japan can prove fate-deciding in the world of space. It strengthens the Indo-Japan ties and expands another horizon in the bilateral ties. It also indicates the seriousness of Prime Minister Modi’s Look East Policy.