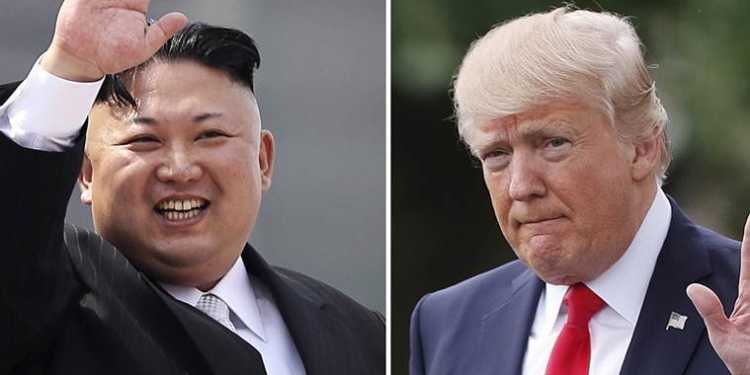 Last week President Donald Trump announced that his meeting with the Supreme Leader of the Democratic People’s Republic of Korea (DPRK) Kim Jong Un will be held on June 12 in Singapore as originally scheduled. The much anticipated meeting appears to be back on track following diplomatic efforts from South Korean President Moon Jae-in. In response to Trump’s letter, Kim Jong Un sent a high level official to meet the President and give him a letter written by the North Korean dictator. After a two hour meeting with the emissary and persistent efforts by President Moon Jae-in, Donald Trump changed his mind.

When Secretary of State Mike Pompeo visited Pyongyang earlier this month, he made Kim Jong-un an offer to abandon nuclear weapons in exchange for the lifting of US sanctions on North Korea. It sounded like a good deal, similar to the pitch made to Muammar Gaddafi in 2003. According to the deal, once the Supreme leader abandons them then he can have all the opportunities (Opportunities to develop North Korea) that are today withheld because of economic sanctions.

No one outside of Pyongyang knows the extent of North Korea’s nuclear program. Estimates of the number of weapons range from fifteen to sixty. Nor do American officials know where the weapons are located. They can be beneath the mountains in the north or in Pyongyang, no one knows. To demonstrate good relations with America, Kim Jong-Un had released three United States citizens of Korean origin, even though they had violated North Korean law.

Take this scenario: Kim meets Trump in Singapore. He informs Trump of the North Korean nukes on army trucks just north of Kaesong, ready for America to take if a deal is struck. He then promises to deliver his nation’s remaining weapons after United States fulfills Secretary Mike Pompeo’s promise of lifting sanctions. When Trump asks about the number of weapons, Kim can say that all the estimated numbers are hyper inflated and that Pyongyang was unable to develop as many nukes as the western intelligence agencies estimated. In return, Kim can demand diplomatic recognition, an end to sanctions, economic aid, entry into multilateral development banks, military exercises terminated and the reduction of American military presence on the peninsula. Kim would allow international inspectors to visit North Korea without any pre-conditions. To ensure equality, international inspectors would also verify that no American nukes remain in South Korea. The two nations’ officials can work out the details. For example, some more nukes might be delivered after diplomatic relations are established between the two countries and trade sanctions are lifted. How would President Trump respond to this?

Without having any knowledge about the weapons the North possesses, Washington would be like a blind man walking on the road without a stick. Obviously, there would be widespread suspicion that North Korea has more warheads than Kim says.  After all, Kim might be telling the truth. Even if a document laden with errors or some concrete evidence is discovered, how would the possible discrepancies be resolved? In case if the disagreements persist, would Trump blow up negotiations after the Supreme Leader offered everything that Washington had asked for?

The easier path certainly would be for the United States to accept Kim’s offer at face value. If Trump is successful in reducing the North Korean nuclear arsenal it would be a genuine achievement. It would be icing on the cake if North Korea takes other steps, such as abandoning its own “hostile policy” toward the United States, Japan and South Korea.

Now, let’s take another case. North Korea cheats Donald Trump and lies about its nuclear aresnal while simultaneously failing to do its bit as part of the deal. It is no secret that Donald Trump has appointed his deputies who in the past have urged regime change in North Korea. Some are even adamant Trump consider the option of regime change today. In North Korea’s point of view, anyone who trusts the United States after military intervention in Afghanistan, Iraq, Libya, and Syria is a fool. Of the latest, by pulling United States of America out of the nuclear agreement with Iran and demanding new restrictions, Trump has showed that the Americans cannot be trusted. There is a serious credibility crisis on part of the United States.

Another nation with vested interests in the outcome of the deal is China. Beijing wants to keep a buffer state and prevent the creation of a united Korea allied with the United States, capable of hosting American troops. The People’s Republic of China benefits from the tension across the 38th Parallel. It’s one of the trade partners of North Korea even during economic sanctions. Chinese would be successful in their objectives only when Washington and Seoul make deals with Pyongyang by giving it the benefit of doubt. China has been forced by the western powers to pressurize North Korea and stop its ostentatious display of nuclear and missile tests. Even if Kim maintains plausible deniability regarding its nuclear project, the situation would still best serve China’s interests. It might relax sanctions to encourage North Korea and pressure the Trump administration to accept the deal on the table. What would Donald Trump do? After spending billions of dollars on building Nuclear Korea one wonders how easily can Kim let it go especially when it came at the cost of millions of impoverished citizens who have nothing to eat except the regime’s propaganda.

This is not the first time when Kim Jong-Un proposed denuclearization; he did the same in June 2013, when the National Defense Commission, the top government body in North Korea chaired by the Supreme Leader made an announcement that it was open to negotiations on denuclearization. But at that time President Obama dismissed it and called it ‘propaganda’ by North Korea to get relief from sanctions. There is no good reason to believe that North Korea would agree to complete denuclearization when Kim meets with President Trump. In the meeting, the ball will lie in Trump’s court and he has to play sharply. Eyes are set, the world is watching.