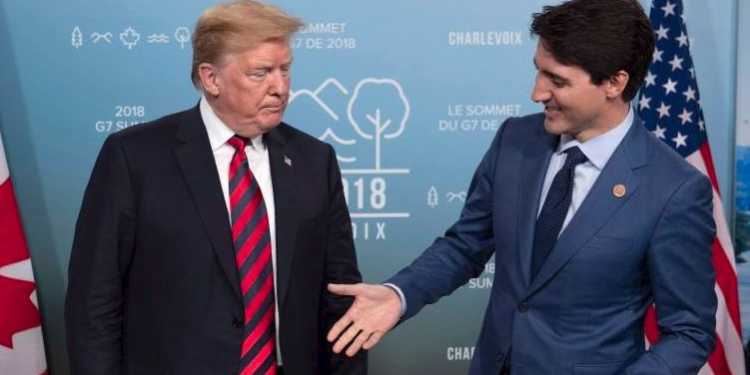 After the snub Canadian Prime Minister Justin Trudeau received on Indian soil at the hands of Prime Minister Narendra Modi led central government in India, The United State of America too has decided to harden its stance against the leader of its closest neighbor. American President Donald Trump has gone the extra mile to show his disdain for Trudeau and his policies by terming him ‘weak’ at the G7 summit being held in Canada. Group of Seven is a group consisting of the seven most advanced economies in the world. It has Canada, France, Germany, Italy, Japan, United Kingdom and the United States as its members. The G7 summit was held in La Malbaie in Quebec province of Canada where the group of nations present had initially agreed on the need for “free, fair, and mutually beneficial trade”. A trade war ensued between USA on one side and European countries, Mexico and Canada on the other when the USA imposed a 25% tariff for steel and 10% tariff on aluminium imports from these countries. Trump backed the move on the international platform stating that this move would help the domestic producers of the country.  European Union, in return, decided to announce tariff on US goods from bikes to bourbon. Canada and Mexico too are allegedly planning to impose some taxes on the USA made products in retaliation.

Justin Trudeau expressed disdain at the imposition of tariffs and called them ‘illegitimate and unacceptable’.  Trudeau, the darling of the liberals around the globe, has been projected as a dynamic leader by them. His over the top kind and affectionate image of a liberal has succeeded in wooing media people from around the globe. All his foreign trips, no matter how unproductive they turn out to be in the long run, are shown as epitomes of success by the world media. Indian government shunned Trudeau and his policies in a never seen before manner. Even Trudeau himself admitted that his India visit had been a disaster and it had led to the downfall of his global image.

Trump administration had earlier shown intent at imposing tariffs on Canadian products because the existing trade rules were too unfair for American industries. Trudeau, in return, hinted at imposing fresh tariffs for American products as well. What Trudeau did not know was that he was messing with the wrong guy. Trump is definitely not a pushover. Infuriated by Trudeau’s comment, Trump slammed him and called him a “dishonest and weak” leader. Trump also cited that their increase in tariffs were a direct response to Canada’s “270% on dairy!” tariffs.

PM Justin Trudeau of Canada acted so meek and mild during our @G7 meetings only to give a news conference after I left saying that, “US Tariffs were kind of insulting” and he “will not be pushed around.” Very dishonest & weak. Our Tariffs are in response to his of 270% on dairy!

Getting panned on an international level must be too much for Trudeau who must immediately start his damage control mode. This snub which came from the leader of the most powerful country in the world today is sure to further weaken Trudeau’s position both globally and inside Canada. The chances for Trudeau winning a second term as the Prime Minister of Canada are already thin. His guffaws at diplomacy have threatened his present term as well.