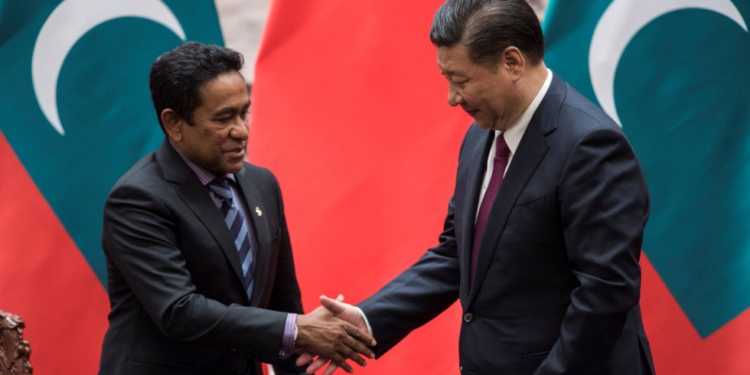 But, both the United States and European Union had threatened massive sanctions against Yameen in case his government found indulging in any sort of wrongdoing and rigging. The threats of sanctions forced Yameen’s government to ensure free and fair elections.

Following election results, Ibrahim Solih said, “The message is loud and clear. The people of the Maldives want change, justice and stability.” With 92% votes counted, Mr Solih has 58.3% votes in his favor. He would be sworn as Maldives fourth President since the country transitioned to Democracy in 2008.

BREAKING:@ibusolih is the next President of Maldives. His lead is unassailable. Defeats President Abdulla Yameen. pic.twitter.com/qH41NpSidn

Transparency Maldives, a local monitoring group maintained that according to early results Solih emerged victorious by a decisive margin. The group appealed, “We call on all stakeholders to maintain an environment conducive for a peaceful transfer of power.”

Congratulations to President Elect @ibusolih. You have done an extremely good service to not only to the people of Maldives, but also to freedom loving people everywhere. Democracy is a historical inevitability.

He also said, “People of the Maldives have taken back their country. They have decided to rebuild their democratic life. This is a vote for democracy and freedom. There is a lot of work to do… We want to see a smooth transition. Don’t want to see President Yameen back to his old tricks. No more Supreme Court, no more Marshall laws, no more emergency rule, no more suppression.”

Relations between India and Maldives have been frosty for some times owing largely to the pro-China president Abdulla Yameen. Ousted President has become a Chinese puppet. Speaking at a thought conclave, exiled President Mohammed Naseer was bold enough to state China was buying up the Maldives. He also highlighted the fact that a small nation like Maldives was massively in debt to China, and faced seizure of ports and other assets of the country to pay back the debt.  China had even sent warship to Maldives in order to intimidate it. Maldives has been declared as a stop in China’s One Road One Belt initiative. China even backed Abdulla Yameen during this year’s crisis. In order to fulfill interest of Chinese, Yameen canceled the contract of major Indian company, GMR, for the development and modernization of Male airport and handed over it to China in 2015. He made many constitutional amendments to serve the interest of Chinese. He signed Free Trade agreement with China in many sectors. He even altered laws to provide Chinese ownership of Maldivian islands.

It’s good to see that nation has finally kicked out a Chinese backed puppet President.

People throwing Chinese backed government out of power has become a trend recently. Myanmar did it in 2015, Sri Lanka in 2015, Malaysia in 2018, and Maldives in 2018 and hopefully Nepal would also follow the same pattern. Maldivian elections are reminiscent to the Sri Lankan elections where pro-China Mahindra Rajapaksa was ousted by a joint opposition candidate. Exit of Yameen from power is likely to bring Maldives closer to India.