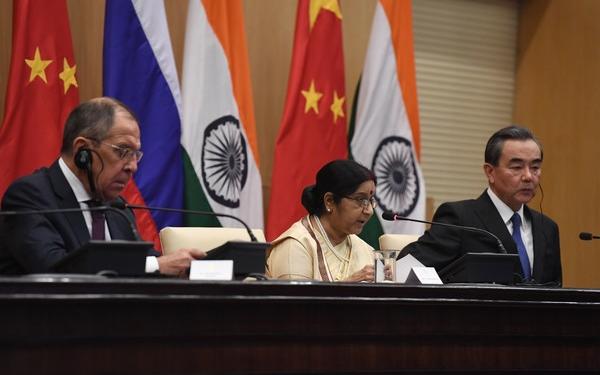 Following the air strikes conducted by the Indian Air Force on Jaish-e-Mohammed terror camps on Tuesday, Sushma Swaraj left for Wuzhen in China for the Russia-India-China-trilateral meeting where she was supposed to meet Chinese State Councillor Wang Yi and Foreign Minister of Russia Sergey Lavrov on Wednesday.

In furtherance to that meeting, China and Russia expressed their commitment to eliminate the “breeding ground of terrorism” at the 16th Foreign Ministers meeting of Russia-India-China (RIC) in Wuzhen. Chinese Foreign Minister Wang Yi said that the three countries have agreed to jointly combat all forms of terrorism through closer policy coordination and practical cooperation. “Especially important is to eradicate the breeding grounds of terrorism and extremism,” Yi said.

This statement is extremely significant as earlier China had not overtly offered their support to combat terrorism by keeping mute after the Pulwama attack and even after the IAF strikes on Tuesday. After the Tuesday strikes, they had said, “Fighting terrorism is a global practice and needs necessary cooperation. India and Pakistan are both important countries in South Asia. Sound relations and cooperation serve the interest of both countries for peace and stability in South Asia… we hope the two countries can keep restraint and do more to improve bilateral relations.”

At a media briefing held after the meeting, Swaraj referred to Yi’s statement saying that it is a commitment by the three countries. “You heard the address by Mr Wang Yi. It’s not just a joint strategy but also our commitment,” she said. Swaraj underlined that terrorism is a threat to humanity and thus a strategy by the three countries is not enough adding that China, Russia and India have reached an understanding on two major counter-terror mechanisms. “We need a global strategy, global cooperation. I’m happy to tell you today we gained consensus on the establishment of UN-led global counter-terrorism mechanism and the finalisation and adoption of the India-proposed Comprehensive Convention on International Terrorism (CCIT) mechanism,” she added.

While Yi, in his address at the end of the meeting, said that India, Russia and China have agreed to combat terrorism, he also tried to tread the fine line by saying that Pakistan, a close ally of China, has “always been opposed to terrorism”. “China appreciates statements from Indian and Pakistani friends saying that they’ll exercise restraint and avoid escalation of situation,” he said.

“As a mutual friend to both India and Pakistan, we hope that they can conduct dialogue to establish facts through investigation to keep things under control and maintain peace and stability in the region. In this process China is playing a constructive role not the opposite,” Yi stated.

In her speech at the RIC Ministers meet, Swaraj referred to Pakistan’s reluctance to take any action after the Pulwama incident. “Following the Pulwama terrorist attack, instead of taking seriously the calls by international community to act against Jaish-e-Mohammad and other terror groups based in Pakistan, it denied any knowledge of the attack and dismissed outright claims by JeM,” she said.

The positive outcome from the trilateral meeting comes after welcome applauds and token of appreciations from various superpowers all over the world.

In Canberra, the Australian Foreign Ministry, putting the onus on Islamabad, in a show of support for Delhi put out a statement, which said, “Pakistan must take urgent and meaningful action against terrorist groups in its territory, including Jaish-e-Mohammed which has claimed responsibility for the 14 February bombing, and Lashkar-e-Taiba. Pakistan must do everything possible to implement its own proscription of Jaish-e-Mohammed. It can no longer allow extremist groups the legal and physical space to operate from its territory. These steps would make a substantial contribution to easing tensions and resolving the underlying causes of conflict.”

Australia urged both sides to “exercise restraint, avoid any action which would endanger peace and security in the region and engage in dialogue to ensure that these issues are resolved peacefully”.

France, which has been at the forefront along with the US to take action against Masood Azhar, said it “recognises India’s legitimacy to ensure its security against cross-border terrorism” and asked Pakistan to “put an end to the operations of terrorist groups established on its territory”. France stands by India in the fight against terrorism in all its forms, and is fully engaged in mobilising the international community to sanction the terrorists responsible for this attack and freezing their financing networks. The statement read, “France most firmly condemns the terrible attack perpetrated on 14 February 2019 against Indian security forces in Pulwama, for which the terrorist group, Jaish-e-Mohammed, has claimed responsibility. France solemnly calls on India and Pakistan to exercise restraint so as to avert any risk of military escalation and preserve strategic stability in the region. The resumption of bilateral dialogue between Islamabad and New Delhi is necessary to initiate a peaceful settlement of differences.”

France?? utterly condemns the appalling attack carried out on February 14 against the Indian security forces in #Pulwama, for which the terrorist group Jaish-e-Mohammed has claimed responsibility.

France recognizes the legitimacy of #India?? in ensuring its security against cross-border #terrorism and calls on #Pakistan?? to put an end to the activities of the terrorist groups established in its territory.

France??, which stands alongside #India?? in the fight against #terrorism in all its forms, is fully committed to mobilizing the international community to punish the terrorists responsible for this attack and to block their channels of financing.

We solemnly call on #India?? and #Pakistan?? to exercise restraint in order to avert any risk of military escalation and to preserve strategic stability in the region.

The resumption of bilateral dialogue between Islamabad and New Delhi is necessary in order to launch efforts to achieve a peaceful resolution to the disputes.

In New Delhi, the Dean of Diplomatic Corps, Frank Hans Dannenberg Castellanos, who is the Ambassador of the Dominican Republic, also issued a statement of support:

The diplomatic corps feels very satisfied for the quick and organised manner in which MEA briefed all heads of missions accredited in Delhi, simultaneously and by the highest of the authorities within the ministry for each regional group. We received the same information given to the media that ‘it was a direct attack to limited and specific objectives with no civilian or military casualties, and it was expressed that there is no intention to escalate and will act in restraint and responsibly, based on credible intelligence that further attacks were planned in India.’

The US government has assured full support to India in its fight against terrorism and pulled up Pakistan for not taking strict action against terror groups which are based in their country.

Acknowledging the recent developments, which has seen India bombing a series of terror hubs in its neighboring country, the US has advised the Pakistani government to not retaliate and avoid military action as a response. Secretary of State, Mike Pompeo issued a statement saying, “Following Indian counter-terrorism actions on February 26, I spoke with Indian Minister of External Affairs Swaraj to emphasize our close security partnership and shared goal of maintaining peace and security in the region. I also spoke to Pakistani Foreign Minister Qureshi to underscore the priority of de-escalating current tensions by avoiding military action, and the urgency of Pakistan taking meaningful action against terrorist groups operating on its soil. I expressed to both Ministers that we encourage India and Pakistan to exercise restraint, and avoid escalation at any cost. I also encouraged both Ministers to prioritize direct communication and avoid further military activity.”

At the trilateral meeting all three ministers stressed that those committing, orchestrating, inciting or supporting terrorist acts must be held accountable and brought to justice in accordance with existing international commitments on countering terrorism, including the UN Global Counter-Terrorism Strategy, relevant UN Security Council resolutions and the Financial Action Task Force standards.