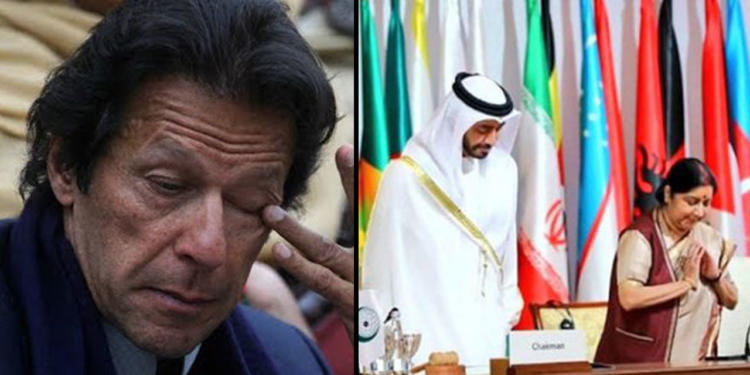 After a ruinous defeat on the military front, another traumatic loss came to Pakistan on the diplomatic front, as it failed in getting Kashmir included in the final joint communiqué of Organization of Islamic Cooperation (OIC) in the Abu Dhabi Declaration. Although Pakistan was able to push forward a separate resolution on Kashmir and chest thumping of its victory; the joint declaration or the final draft is the only document that is drafted and presented for discussion. Moreover, final joint communiqué is the only document that is adopted by all 57 members of OIC.

Pakistani delegate, in OIC meet, used every tool in the box to demean India. The delegation led by Raja Ali Ejaz, Pakistan’s Ambassador to Saudi Arabia, started their protest in the second session of OIC and condemned the invitation to Indian delegation led by Foreign Minister Sushma Swaraj.

Earlier, on March 1, Pakistan announced that they will not attend the 46th session of the OIC’s Council of Foreign Ministers (CFM), hosted by the United Arab Emirates (UAE) in Abu Dhabi. Stating Pakistan’s take on the issue, Foreign Minister Shah Mahmood Qureshi stated, “A joint resolution has been passed by Parliament, signed by all parties, which demands that Pakistan refrain from attending the OIC meeting. In light of this resolution, I will not attend the meeting.”

Prior to this, on February 27, Pakistani delegation reached out to the UAE and Saudi Arabia and called for an emergency meeting of the OIC “Contact Group on J&K” to get the invitation withdrawn. On the ground of human right violation in Kashmir, Pakistan’s Foreign Secretary Tehmina Janjua and President of AJK or “Azad Kashmir” Masood Khan tried to make a fake case against India in the emergency meeting.

The first major blow to Pakistan came when, despite its continued effort, the host UAE was not convinced and Sushma Swaraj was invited by her UAE counterpart Sheikh Abdullah bin Zayed Al Nahyan. According to India Today, Pakistan was conveyed that there will be no change in the decision to “invite” India. Pakistan was further informed that Sushma Swaraj would be “welcomed with full honour” accorded to a guest.

Another blow to the diplomacy of Pakistan came when it was not able to get ‘Jammu and Kashmir’ mentioned in the joint declaration of the 46th session of OIC, despite their insuperable pressure. The delighted news for India is that the Abu Dhabi Declaration has no mention, not even a passing reference, of Jammu and Kashmir. Much diplomatic effort was put in by India to ensure that it is kept out of the joint communiqué.

Not to forget that, in the history of all the “joint declarations” at the OIC, the 2016 Tashkent Declaration was the only time when Kashmir was not placed in the final document. The entire event could be termed a symbol of prevailing democracy and a colossal diplomatic victory for India among the 57 OIC member states.