US Congressman moves resolution against Pakistan’s inaction over terrorism 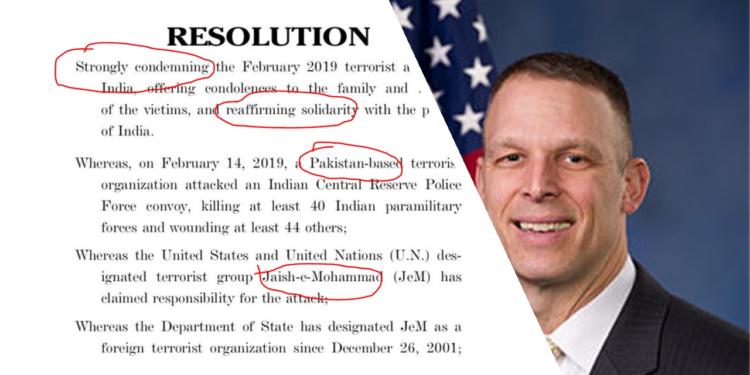 With the international community turning the heat on Pakistan, over its state sponsored terror activities in the region, in a major diplomatic victory for India, US House of Representatives is all set to pass a resolution against Pakistan. The resolution not only exposes Pakistan’s’ state policy of using terrorism as a political tool but also calls for strict action on Pakistan originating terror and those who support it.

US congressman, Scott Perry has moved a resolution against Pakistan over its systematic utilization of terrorism as a part of state policy. This move, which comes as a befitting response to terrorist sympathizers around the world, is sure to clear the air regarding Pakistan’s involvement in almost all the terror incidents in the region. Tensions between India and Pakistan have further risen after the ghastly terror attack in the Indian state of Jammu and Kashmir, where more than 40 soldiers of the CRPF had lost their lives. Taking the issue, India promptly assessed the situation and in a pre-emptive anti –terror strike , the Indian Air Force destroyed a major terror camp in Balakot, Pakistan in which according to intelligence reports around 300 terrorist have been killed in action .

“Strongly condemning the February 2019 terrorist attack in India, offering condolences to the family and friends of the victims, and reaffirming solidarity with the people of India…on February 14, 2019, a Pakistan-based terrorist organization attacked an Indian Central Reserve Police Force convoy, killing at least 40 Indian paramilitary forces and wounding at least 44 others;” read the resolution.

Expressing sharp condemnation of the Pakistan sponsored terror attack; the resolution also addresses the perpetual use of Pakistani sovereign territory for terror training and recruitment. “(the resolution) urges the Government of Pakistan to end  immediately its support, including access to a safe  haven, to terrorist groups operating on its soil, whose goals are to sow chaos, violence, and terror in  the region;” the resolution also read “(the resolution) recognizes the threat posed by Jaish-e-Mohammad and other terrorist organizations being provided safe haven in Pakistan and reaffirms the United States commitment to addressing Pakistan’s harboring and support of internationally recognized terrorist organizations;”

The resolution also cited US’s Department of State’s 2017 Country Reports on Terrorism according to which “Pakistan did not take sufficient action against other externally focused groups such as Lashkar e-Tayyiba (LeT) and Jaish-e-Mohammad (JeM) in 2017, which continued to operate, train, organize, and fundraise in Pakistan. Pakistan detained Hafiz Saeed, the leader of LeT and its front organization Jamaat ud-Dawa (JuD) in January 2017, but a Pakistani court ordered Hafiz Saeed released from house arrest in November 2017.”

This move by the US Congress indicates towards a huge diplomatic victory for India. International community has been quite vocal against Pakistan on the issue of terrorism however nations like China, with economic exposure to Pakistan are trying to safeguard Pakistan in international forums. With its firm and robust stand on terrorism and support from the International community, India is sure to demolish Pakistan-Terror nexus, which has plagued the region for long.