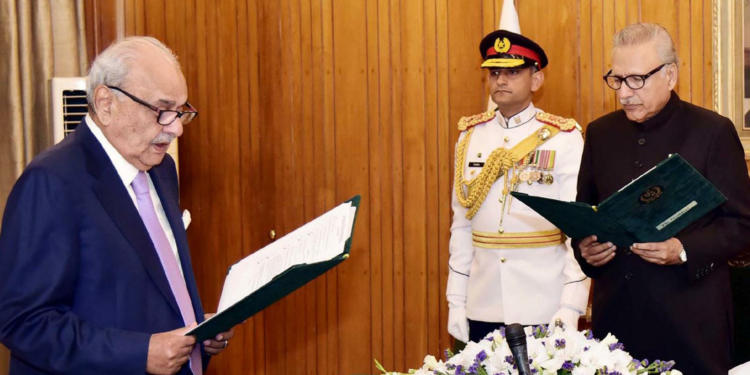 Pakistan has once again shown its commitment to protect terrorists and support those who protect terrorists by appointing  Ijaz Shah, country’s former Intelligence Bureau (IB) chief as Minister for Parliamentary Affairs, despite repeated objections raised by Pakistan’s’ opposition.

Ijaz Shah a close confidant of former Pakistani dictator General Pervez Musharraf has also been accused of harboring terror outfit Al-Qaeda’s founder-leader Osama bin Laden in Pakistan. Osama bin Laden was wanted for perpetrating the horrendous 9/11 attacks in which more than 2900 people who had lost their lives. Ijaz Shah who was the director general of the Intelligence Bureau (IB) from 2004 to 2008 was also accused of using the IB for political victimization.

The Sydney Morning Herald in its report in 2012 had quoted former ISI chief General Ziauddin Butt saying that Ijaz Shah had ordered to build the three-storied walled compound in Abbottabad where Osama bin Laden was later hunted down and killed by US Forces in May of 2011.

“I fully believe that Ijaz Shah had kept this man (Osama bin Laden, in Abbottabad) with the full knowledge of Pervez Musharraf,” Butt had alleged.

This move also puts the Government at odds with Pakistan’s opposition, Mainly the Pakistan People’s Party (PPP), as the late Pakistani leader Benazir Bhutto had alleged Ijaz Shah’s role in hatching a conspiracy to kill her.

“Benazir had named him as [one of] her killers in an email. She had said that if she was assassinated, Shah should be investigated for it. After Shah’s addition [to the federal cabinet], there is no difference between Pervez Musharraf and Imran Khan’s cabinet,” Nafeesa said.

PPP leader Syed Khursheed Shah, alleging that Pakistan Prime Minister has no respect for the Parliament, told Dawn, “Ijaz Shah is being made the minister to make parliament redundant and to further degrade it.” He further added that Shah was made the minister to “provoke” the Opposition. He also claimed that Shah has been “brought to power as an alternative” to Pervez Musharraf, who currently lives in Dubai.

Internal politics aside, Pakistan’s deep state has been harboring terrorists, terrorist supporters and other criminals on their sovereign territory. Even Pakistani opposition has refrained to attack Ijaz Shah based on his links with Osama bin Laden which also indicates the strong grip of the deep state that exists in Pakistan.

Pakistani establishment, who has been trying to portray its anti-terror image through its meek and immaterial efforts against terrorism, has failed time and time again to prevent usage of Pakistani sovereign territory by extremist originations to train terrorists. Now appointment of a controversial figure such as Ijaz Shah as the nation’s Parliamentary Affairs minister is surely not coherent with Pakistani claims on action against terrorist and their supporters. With mounting pressure from the international community on Pakistan, this move further degrades Pakistan’s nonexistent credibility.