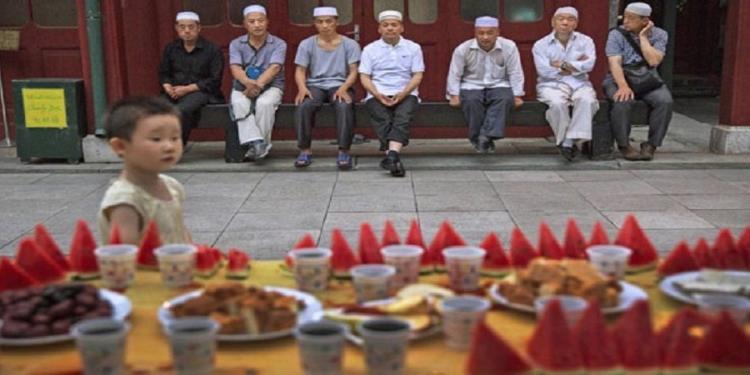 As Muslims all over the world observe fast this month, there will be no Ramzan in China as the country has banned its Muslim citizens from fasting. China’s authoritarian regime had earlier introduced its restrictive notification in light of the Ramzan month, keeping up with their yearly precedence. Chinese authorities consider fasting as a “sign of extremism”.

The country has banned civil servants, students and teachers in the Xinjiang region from fasting during the month of Ramzan and has also ordered all the restaurants to remain open. The Xinjiang region predominantly consists of Uighur Muslims, with the total Muslim population amounting to 58% in the area; larger than in any other region in China. Most Muslims are required to fast from dawn to dusk during the month of Ramzan, which began yesterday.

This year, Muslim organisations and human rights groups are urging Muslims in the US to boycott products that are made in China. Hena Zuberi, director of outreach for the nonprofit Justice for All said, “People say, ‘Oh, I can’t boycott China, everything is made in China,” She helped found the Fast From China campaign this month. “Well, we have the spiritual wherewithal to refrain from eating and drinking during the day in Ramadan. This is a time to control your nafs (self),” she added.

The Fast From China initiative aims to get Muslims to rethink their everyday purchasing decisions and replace items that are made in China. It was launched on April 2019 by the Sound Vision Foundation’s Save Uighur project.

This upcoming Ramadan, let's not just fast from food and water, but also products made in China. This will be a big step forward in challenging China's genocide of Uyghurs and other Turkic people. #FastFromChina pic.twitter.com/MzCVVvwo9p

Imam Abdul Malik Mujahid, head of the Sound Vision Foundation said, “It’s important for Americans to realize that they benefit from the open market, but they’re not opening their minds towards freedom of religion, human rights and due process of law.” He further added, “Ramadan is a time when people develop a higher level of connection and consciousness. Being hungry reminds us of the bigger picture of humanity.”

Since #China forbid Muslims from fasting, let us fast from made in #China products this #Ramadan. Let’s #FastFromChina in solidarity with those who cannot fast in #EastTurkestan.

Al-Furqaan Foundation: Largest publishers of #Quran translations in US endorses this cause. #Uyghurs pic.twitter.com/kPMdU9216X

The Muslim citizens are also not allowed to offer prayers in the mosque during the month of Ramzan.

In recent years, various counties in the Xinjiang province have posted notices on government websites stating that Communist Party members and primary and secondary school students and were not permitted to observe Ramzan.

The education bureau of Tarbaghatay city had ordered schools to communicate to students that “during Ramadan, ethnic minority students do not fast, do not enter mosques … and do not attend religious activities”. Similar orders were also posted on the websites of other Xinjiang education bureaus and schools.

According to a notice on the government’s website, in a village in Yili, near the border with Kazakhstan, there was an increased inspection in the mosques with officials checking the identification cards of anyone who comes to pray during Ramzan.

Observing these restrictions, Dilxat Rexit, a spokesman for the exiled World Uyghur Congress had stated, “China’s goal in prohibiting fasting is to forcibly move Uighurs away from their Muslim culture during Ramadan.” He continued further by saying, “Policies that prohibit religious fasting is a provocation and will only lead to instability and conflict.”

In an effort to ratify all these restrictions and maintain peace in the region, the Bole County government had said that Mehmet Talip, a 90-year-old Uighur Communist Party member, had promised to avoid fasting and vowed to “not enter a mosque in order to consciously resist religious and superstitious ideas.”

China’s ruling Communist party, being officially atheist has restricted the practice of Ramzan in Xinjiang for years. Each year their attempt to ban fasting in Xinjiang receives widespread criticism from rights groups. The Uighur rights groups believe the country’s restrictions on Islam in Xinjiang have added to ethnic tensions in the region resulting in frequent clashes which have killed hundreds in recent years. China opposes this stance and says it faces a “terrorist threat” in Xinjiang and hence attributes “religious extremism” as the cause of the growing violence.

Pakistan is working hand in glove with China for exploiting Balochistan