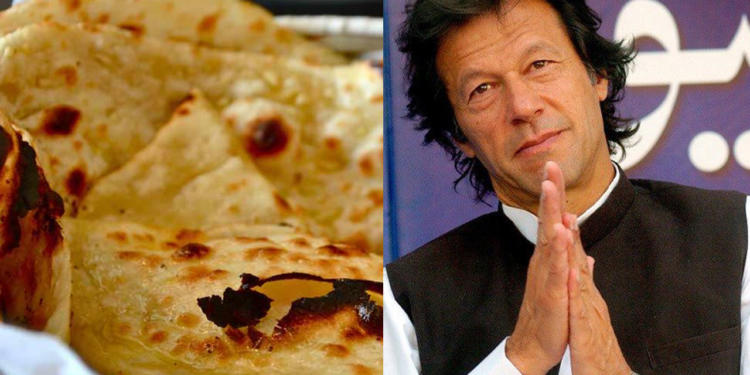 Done with the 2 minutes of limelight the US visit had provided, Imran Khan has now apparently moved on to urgent issues of national interest. According to reports, Pakistan on Tuesday had a very important federal Cabinet meeting chaired by Prime Minister Imran Khan to discuss the prices of naan and roti in the country. The meeting has been fruitful as the federal cabinet has decided to revert back the prices of the naan and roti in the country to their original prices.

Pakistan is facing severe economic crisis with short supplies of foreign currency reserves and stagnating growth. The IMF forecasts Pakistan’s economic growth will slow to 2.9 per cent this fiscal year from 5.2 per cent in 2018. In February, the State Bank of Pakistan, the country’s central bank had the only USD 8 billion bn left in foreign reserves.

Amidst this growing crisis, Pakistan had decided to pro-actively deal with the situation by increasing the prices of naan and roti in the country. Imran Khan believed that naan being the staple diet in Pakistan, would lead to an increase in resources in the country’s coffers.

For implementing this tough economic reform, the Prime Minister had personally prioritized the implementation and as reported by Dawn, the price of the naan was increased to Rs 12 to Rs 15 in different cities of Pakistan. Before this, the naan price ranged between Rs 8 and Rs 10. Similarly, roti is now available at Rs 10 to Rs 12, while its previous rate was Rs 7 to Rs 8.

However, this move was met by a lot of backlash and Imran Khan, portraying himself as the people’s leader had personally ensured that the prices of the naan and roti go back to their previous prices, as stated by the Special Assistant to the Prime Minister on Information Dr Firdous Ashiq Awan. Not only this, to show his complete devotion to the issue, besides the Cabinet meeting, Imran Khan had also presided over a meeting on gas tariff and rates of naan and roti.

This isn’t the first time Imran Khan led Pakistan has attempted to pro-actively deal with the economic crisis in the country. A few months ago, the country had decided to increase its foreign exchange reserve by exporting donkeys to their all weather ally, China. In order to boost this, Pakistan announced that it will develop donkey farms in the country. Not only that, as a follow up to the announcement, the first and one of a kind donkey hospital opened earlier in Lahore having the largest number of animals in the country.

Ingenious no doubt, the venture hasn’t seemed to work, given the fact that Pakistan is on a borrowing spree. The country is sustaining its economy through loans from friendly countries including Qatar, UAE, Saudi Arabia and China. Over a period of 1 year, 16 billion dollars has been borrowed by Pakistan.

The mounting problems are a result of Pakistan’s grey listing by the FATF, which is rapidly moving towards conversion into a black listing. Due to this, the economy risks losing $ 10 billion annually. Pakistan staunchly refuses to curb terror financing and so is thinking of novel ways to get the economy back on track. Imran Khan is in the hope that one day, either the unique ventures of the government, such as donkey export might work, and if not, increasing prices of roti will definitely make a difference in the government’s coffers. Until then, the prime minister is personally making a point to be present through all the economic reforms and their subsequent revocation.