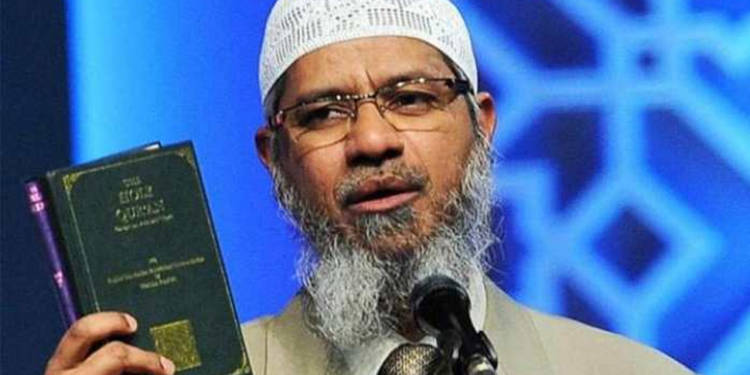 Zakir Naik, the controversial Islamic preacher has been banned from making ‘public speeches’ in Malaysia in the interest of national security of the country. “Yes. Such an order has been given to all police contingents, and this was done in the interest of national security and to preserve racial harmony,” said Datuk Asmawati Ahmad, Police Head of Corporate Communications. Seven Malaysian states had already banned Naik from making public speeches.

Naik has been under fire for his controversial and divisive speeches in Malaysia. Malaysian police interrogated him for 10 hours about a speech in which he said Hindus in Malaysia had “100 times more rights” than the Muslim minority in India, and that Malaysian Chinese were guests of the country.

It must be noted that Naik is facing criminal charges in India and Bangladesh. He is living in Malaysia since last three years and was granted permanent resident status by the previous Malaysian government. Indian government made an extradition request in July last year but the Malaysian government has not taken any action so far. The incumbent Mahathir Mohamad government is ready to deport him to any other country but not India as he has “fear of being killed” in India. “If any [other] country wants to have him, they are welcome,” said Mahathir.

However, the Malaysian government has threatened to take back the permanent resident status. “He (Naik) has PR status. We can take that away if he does something that is detrimental to the well-being of the nation,” said PM Mahathir. “At this moment, the police are investigating if he is doing that or not. If he is doing it, then it is necessary for us to take away his PR status,” he said.

Several ministers in the Malaysian government including those of Indian origin have called for his expulsion after his controversial remarks on minority communities.

“We have expressed our position, which is that action must be taken and that Zakir Naik should no longer be allowed to remain in Malaysia,” said Gobind Singh Deo, Minister of Communications and Multimedia. “The prime minister has taken note of our concerns. We leave it to him to consider the position and to decide soonest possible what will be done to deal with the problem,” he added.

M Kulasegaran, the Human Resource Minister of Malaysia has said that Zakir Naik should be sent back to India. “It’s time for the fugitive foreigner to leave Malaysia and to face charges of terrorism and money-laundering charges in India,” said the lawmaker.

According to Kulasegaran, Zakir Naik is trying to create fissures in the multi-racial nation of Malaysia to win the favour of Muslim majority. Zakir Naik has been trying to propagate hatred against the Hindu and other non-Muslim communities in Malaysia.

It is pretty clear that the action taken against Naik by the Malaysian government is due to the influence of the Indian and more specifically Hindu lobby in the country.

The nature of Islam followed in Malaysia is not the Wahhabi/Salafi interpretation of the religion. The inclusiveness of Hinduism is still prevalent in Malaysia and therefore majority of the followers of Islam do not agree with Zakir Naik’s hardline interpretation. The Hindu-Buddhist culture of thousands of the years could not have been wiped out by monotheistic Islam which had just 600 years of history on the islands of Malaysia.

Another person of Indian origin named Xavier Jayakumar who is Minister of Water, Land and Natural Resources said that allowing Naik to stay in Malaysia would lead to “potential racial and religious division”. “We do not need such individuals to issue seditious statements with the intention of driving a wedge between Muslims and non-Muslims in Malaysia,” said Jayakumar.

There is no doubt that Zakir Naik has been trying to radicalise the people of Malaysia to achieve similar outcomes in the Southeast Asian region. Malaysia, along with other countries of Southeast Asia, has been influenced by Hinduism and Buddhism for centuries. Islam came to the country in 14th century and spread over the decades. However, the people of the country still follow many Hindu and Buddhist rituals and the culture is still very syncretic. The combined effort of minorities of Malaysia would help them in getting Naik behind the bars.