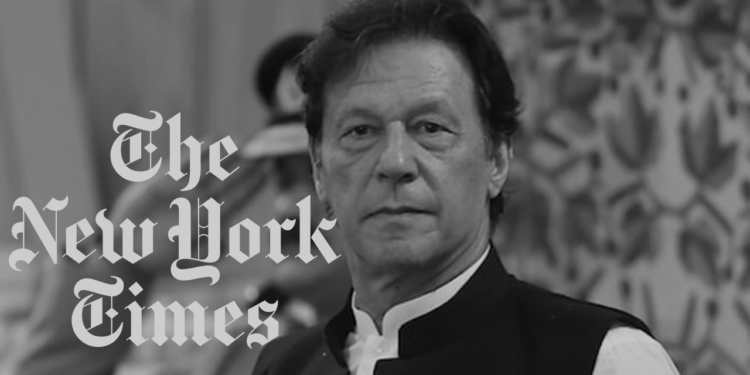 While Prime Minister Modi has gone on to captivate the world with his ‘Howdy, Modi!’ event which was a rousing success and his address at the UN Climate Change summit has received praise from all quarters. He has also been conferred with the prestigious Goalkeepers award from Bill Gates and has met a plethora of world leaders as India’s diplomatic clout was on full display. Pakistan Prime Minister Imran Khan did his best to sabotage the ‘Howdy, Modi’ event as his attempts to propagate Pakistan’s line on Kashmir fell on deaf ears. Seeing this, The New York Times (NYT) has stepped in to help Pakistan propagate its nefarious agenda as its editorial board met with Imran Khan upon the latter’s visit to the USA.

It speaks volumes about a leader when he has to resort to meet the editorial board of a newspaper as no country is willing to buy Pakistan’s line on Kashmir. NYT has been regularly writing pieces which are sympathetic to Pakistan depicting the revanchist state as a victim of India’s supposed aggression. The publication also found it prudent to provide Imran Khan with a platform to blackmail the world with the threat of nuclear war if India’s ‘aggression’ wasn’t stopped.

A look through NYT will result in numerous pieces which depict a distorted version of Kashmir and attempts to project a gloomy situation in Kashmir. What is glaring that there are little or no versions of India’s stance of Kashmir and how Pakistan is trying to destabilise the region by trying to infiltrate terrorists across the border.

At a time when the publication has been under fire from all quarters for its tacit support to the revanchist state of Pakistan, Imran Khan has gone a step further and met the editorial board of the NYT to further propagate his lies on Kashmir.

The publication has more often than not come to the rescue of Pakistan and Imran Khan with it also questioning the authenticity of the Balakot air strikes or trying to project PM Modi as a tyrant who has managed to seduce the nation with envy and hate. The publication continues to ignore India’s side and ignore the fact that till date no death has been reported in Kashmir ever since the government moved to revoke Article 370.

The fact which cannot be stressed enough is that India is the only stakeholder which actually allows journalists to cover its part of Kashmir even during the curfew whereas China doesn’t allow any journalist an entry to its occupied Kashmir and Pakistan has made it mandatory to obtain a NOC from the military in order to enter its occupied Kashmir which is often easier said than done. If NYT was truly ‘fearless’ why doesn’t it cover PoK and the plight of Uyghur Muslims in China? The amount of fabricated stories on Kashmir that Imran Khan and the NYT have managed to come up with in the past few months is the stuff of dreams for any aspiring fiction writer out there.

At a time when Pakistan stands increasingly isolated with little or no options, expect the NYT to run a few articles on how Pakistan has isolated India as it comes up with yet another set of fictional stories post its meeting with Imran Khan. It seems that Imran Khan is setting up a propaganda base in the form of the NYT which will be a major cause of concern for the likes of Dawn and Tribune. As a certain section of Pakistani media came up with yet another fictional story where Imran Khan met Putin at a dinner hosted by Trump, it remains to be seen whether the NYT can beat the Pakistani media in its own game.