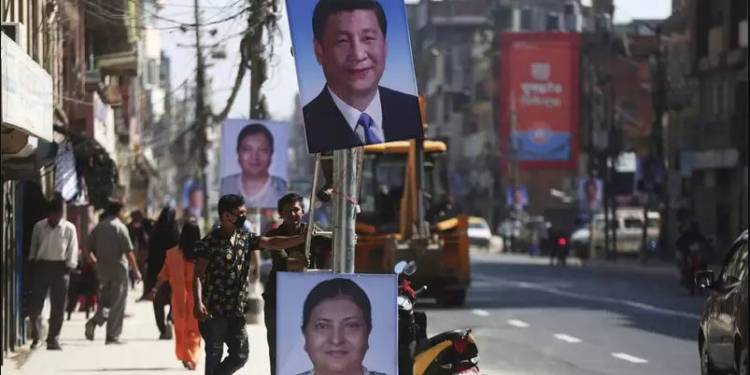 Since Communist party was elected in Nepal in 2017, China became a major foreign player in the polity of the Himalayan country. China has put the Communist government of Nepal on a high pedestal. The paramount leader of China-Xi Jinping, is paying a visit to Nepal after his interaction with PM Modi in Mahabalipuram.

However, despite the growing bonhomie between the leaders of both countries, the people of the Himalayan country do not perceive China with high regards. And they have solid reason do so. Huawei, the Chinese company which has been infamous for hacking and data theft, hacked 200 Nepali websites, including some government websites, reported Economic Times.

The Nepalese people held protest in front of Huawei office, and shouted anti-China, anti-Huawei slogans. The protesters also tried to enter Huawei’s office, but were arrested by the police.

A public programme namely Khabardari and Sachetna Sabha (Warning and Awareness meeting) was organized to increase the awareness about the misconduct of Huawei in Nepal as well as foreign countries. Another programme which included interaction with senior journalist was organized at Siddhartha College, Kathmandu.

The protesters accused that Minister of Communication Gokul Baskota, in alliance with Nepal Telecom (NT), awarded 4G contract to Huawei without open bidding. Huawei has been accused of security breach, data theft, and hacking by many governments. It has been accused of supplying national security related data of many countries to Chinese armed forces.

The issue of security breach has been very harmful for Huawei in the last few months. Many major markets of Huawei like United States, United Kingdom, France, Germany, Japan, and Australia have banned Huawei over security concerns.

US blacklisted Huawei over the charges of espionage and doing business with Iran. The company was hit hard due to ban as it could no longer do business with American companies which are an integral part of its manufacturing ecosystem.

The components and software like Google Android system could not be updated. The important apps like Google Maps and Gmail will not run on Honor 20 due to US ban.

The political parties and governments across the world have discussed the security breach by the company. A few governments including the US have acted while almost all political establishments have become more careful with the company. According to Bloomberg Opinion columnist on National Security and Foreign Policy, Eli Lake, “Donald Trump’s ban on Huawei is needed as there has been ample evidence of the tech company collecting intelligence via its tech in the US.”

Previously, Chinese Nationals hacked ATMs of many prominent banks including Nepal Rashtriya Bank, and this caused massive public outrage against China. The ATM scandal was not made public as Communist government of Nepal wanted to protect Chinese interest. The ATM scandal was carried out by tinkering Nepal Electronic System (NEPS), which put whole Nepalese banking system at risk.

The Chinese embassy in Nepal is taking every possible step to protect the interest Huawei against any government action. The pro-China media outlets carried out sponsored articles in support of Huawei to revive the public image of Huawei.

China is involved in many illegal activities in Nepal, including bride trafficking. The sex ratio of China is among worst due to its disastrous one child policy and therefore many Chinese companies are involved in bride trafficking from countries like Pakistan and Nepal. China is also constructing a dam on Arun River, Sankhuwasabha. The water released from dam caused flood in Province 1 and Province 2.

Profit and self-interest is supreme to China. Its policies in the Himalayan country are harmful to the interest of the people, but the Communist government is protecting Chinese companies. The Chinese embassy in Nepal has got a free hand in Nepal and they are protecting Chinese interest by all possible means. The Communist government is whitewashing the illegal activities like hacking, data theft, and bride trafficking.