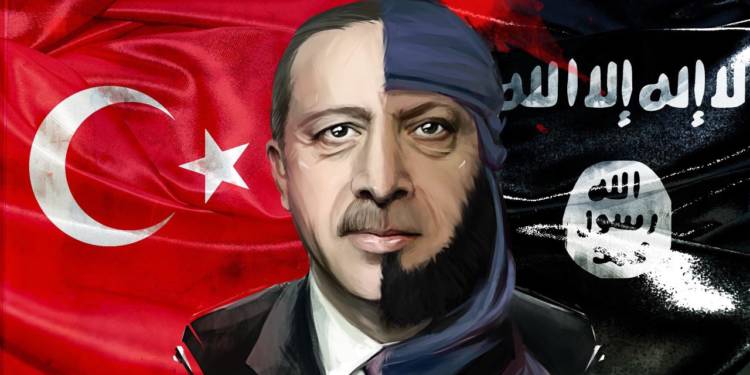 Islamist to the core, President of Turkey Recep Tayyip Erdogan has been exposed yet again, this time by the French President Emmanuel Macron who has accused Turkey of colluding with Islamic State proxies during the Nato summit in London. Macron charged, “When I look at Turkey, they now are fighting against those who fight with us, who fought with us, shoulder to shoulder, against Isis. And sometimes they work with Isis proxies.”

Turkey and its President Erdogan’s relationship with the ISIS has become an open secret now; with reports of Erdogan’s son-in-law and the Energy Minister of Turkey, Berat Albayrak being directly involved in dealing with the ISIS, there is little room for any kind of confusion. Erdogan has always been an Islamist and a veiled supporter of ISIS, several reports have proved this time and time again. French President’s comments have confirmed the negative role of Turkey in global fight against ISIS. Erdogan’s abysmal record as a jailer of the journalists and critics, his genocidal war against the Kurds, or even the $100 million mosque he has constructed in Lanham, Maryland are the proofs of his Islamist ideology, which drives the Isis.

Erdogan even made a futile attempt to mess with India on the Kashmir issue with him condemning India’s decision of abrogating the special status of J&K, in the UNGA but only to get a scathing response from PM Narendra Modi. PM Modi taught him a lesson in diplomacy with cancelling his turkey visit and slapping several diplomatic jolts to turkey. India had made sure that Turkey does not get away after making obnoxious remarks that are clearly detrimental to India’s territorial sovereignty. Turkey is also a partner in crime for Pakistan, it has supported the country even in FATF, this further depicts his islamist credentials.

Erdogan has committed to support the global jihad especially to the ISIS terrorists, projecting himself as the Caliph of the Islam, Since 2012, the Turkish intelligence service, MIT, under Erdogan’s direction, has been providing resources and material assistance to ISIS, while Turkish Customs officials turned a blind eye to ISIS recruits flowing across Turkey’s borders into Syria and Iraq. Scores of ISIS fighters captured by pro-U.S. Kurdish forces in northern Syria showed Turkish exit stamps on their passports, and otherwise boasted of the direct assistance they had received from Turkish authorities.

Notably, depicting his direct support to the ISIS he has launched a military offensive against the Kurds, who were very crucial in the fight against the ISIS in Northern Syria, Turkey had taken the spotlight with nations around the world calling on the country to cease its operations. Taking the lead, the European Union and the USA had issued firm signals against the continuation of military operations in the region which could not only lead to regional instability but are also being seen as Turkeys attempts to subjugate Kurdish ethnic minorities in the region and revive the Islamic State terrorists.

The connection of the Erdoğan΄s family with the oil smuggling Islamic State has also been exposed by Wikileaks΄, as it had revealed the emails Erdoğan΄s son-in-law, Berat Albayrak. Albayrak΄s emails seem to confirm the all the accusations, since the energy minister appealed to be the “unofficial” owner of the oil company Powertrance which imported oil from the ISIS΄ land in Northern Irak to Turkey.

During the Nato summit, Macron repeatedly warned that ISIS was making a comeback in Syria because of the Turkish invasion since it had weakened the mainly Kurdish Syrian Defence Forces, including the YPD fighters, that have formed the backbone of the fight against ISIS. Macron said he supported Nato developing wider goals including combating terrorism but also questioned the activities of Erdogan, while calling on Turkey to end its ambiguities towards these groups.