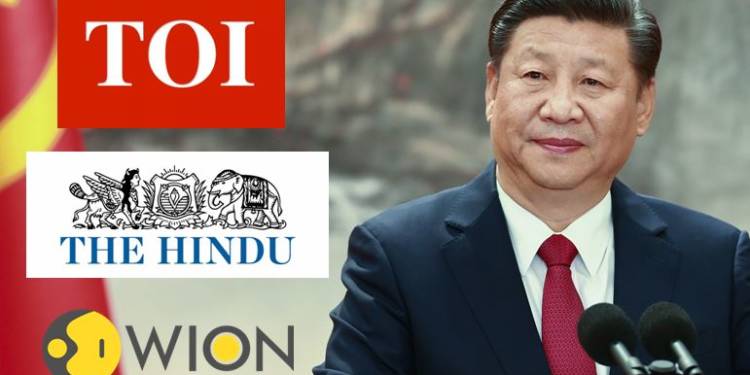 A few days ago, The Hindu published an article by Dr. Chen Shih-chung, Minister of Health and Welfare, Taiwan, on how the country contained Coronavirus successfully despite its geographical proximity and trade relations with China. In the article, the Taiwanese health minister also advocated for Taiwan’s participation in the WHO.

“We urge WHO and related parties to acknowledge Taiwan’s long-standing contributions to the international community in the areas of public health, disease prevention, and the human right to health, and to include Taiwan in WHO and its meetings, mechanisms, and activities,” wrote the Taiwanese minister.

It is well known that the WHO does not accept Taiwan as an independent entity, and this was done at the behest of China. In fact, WHO is so China-centric that it represents the global map from China’s point of view and shows Ladakh as Chinese territory, and not as a disputed one as per international norms.

Read: WHO is now going out of its way to please China, shows Aksai Chin as part of China, J&K separate

Now the Chinese embassy in India was rattled by the article and released a statement by Ji Rong, the foreign ministry spokesperson. “On May 2, 2020, certain Indian media published an article by Chen Shih-chung, head of the Taiwan authorities’ health and welfare department, openly advocating “Taiwan independence” and “Taiwan’s participation in WHO” reads the statement.

“Ji Rong pointed out that China has clearly stated its position many times concerning so-called “Taiwan’s participation in WHO”. The One-China principle is a widely accepted universal consensus of the international community including the Government of the Republic of India,” it added.

Read: ‘We want Taiwan in WHO,’ the Taiwanese cause takes the centre stage in USA’s war with China

This is not the first time that Chinese embassy in India has released a statement against Indian media house for interviewing Taiwanese politicians or publishing their articles. Previously, the embassy did the same in the case of Times of India and WION news. The embassy regularly advises the media houses to stick to so-called ‘One China policy’.

In the case of The Hindu, the embassy said in the statement, “We urge the relevant media take a correct stance on issues concerning China’s sovereignty and territorial integrity, adhere to the One-China principle, and do not provide a platform for “Taiwan independence” forces.”

The Chinese embassy is rattled about the fact that Indian media houses are not toeing to the line of the Chinese government, as done by Chinese media. Chinese authorities are definitely not aware of how media is allowed to speak its mind in democratic countries with freedom of press like India.

The aggressive coverage of Coronavirus by WION news, which received widespread acclaim from people across the Indian political spectrum and foreign authorities, has annoyed the Chinese Communist Party. The Chinese embassy first questioned WION news, after that it targeted Times of India, and now The Hindu.

Read: ‘How dare you talk about Taiwan?’ China furious with WION as its propaganda gets exposed worldwide

Read: ‘Do not provide them any platform,’ ToI’s interview of Taiwan’s foreign minister has left China totally rattled

Media houses like The Hindu, which have been pro-China many times in the past, arguably because the Chinese embassy gives advertisement worth million, are not toeing to Chinese line, and this has rattled the Chinese establishment. Chinese embassy tells every media house to stick to One China policy while these media houses publish interviews or publish articles of Taiwanese authorities every other day, as the people are enthusiastic about the highly successful ‘Taiwanese model’ of containing Coronavirus.

The Taiwan government has controlled the Coronavirus pandemic brilliantly despite geographical proximity with China. Out of the 2.3 crore population, the island country has only 429 cases so far and the majority of the patients have already recovered, leaving 6 dead.

The island country won international acclaim for containing Covid-19, and the countries around the world are enthusiastic about enhancing ties with Taiwan since the outbreak of Coronavirus.

Taiwan has supplied millions of masks and other personal protective equipments to needy countries around the world including the United States and those of Western Europe. The country once again emerged on the international map after Coronavirus outbreak after shadowed by mighty People’s Republic of China for decades.

Moreover, US President Donald Trump recently signed the TAIPEI Act to support Taiwan’s international relations. More importantly, the bill had received bipartisan support as it had been unanimously passed by both the house of Representatives and the Senate. This came at a time when the world is blaming China for causing the coronavirus pandemic.

The TAIPEI act states that the US should strive to support Taiwan in strengthening the country’s alliances across the world in the face of Chinese pressure as countries like Burkina Faso, Gambia, Panama and the Dominican Republic have formally severed diplomatic ties in favour of diplomatic relations with China.

It seems that the world is now finally recognising Taiwan’s work and its importance in the wake of the Wuhan virus which bodes well for Taiwan and threatens to dump the CCP’s “One China Policy” for good. But this, obviously, does not goes well with Chinese authorities and that is why they are trying to force Indian media houses to adhere to their One China policy.

‘You’ll do as we say,’ China brazenly meddles in political affairs of Nepal, saves Communist govt from falling