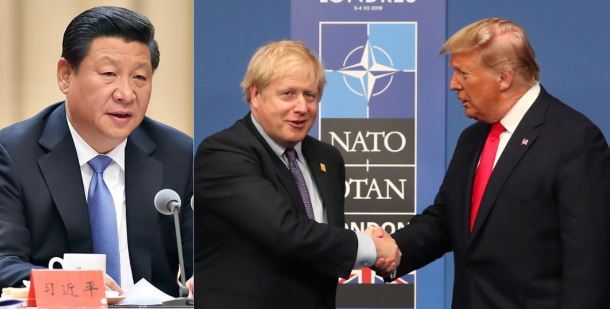 A few days ago, the United States government gave Britain a choice- to choose between the US and China. US bureaucrats highlighted that Britain cannot go on with continuing 5G infrastructure with Huawei and expect a free trade deal with the US.

“The US government seems to want to use the pandemic to cut off China from the global economy to onshore manufacturing and redesign the global economy, to reprioritise around security while saying you can’t have China as part of the system because of how they behave,” said a UK finance official back then when the US told UK to make a choice.

Now, it seems that the British Prime Minister Boris Johnson took only a few days to make the choice and ditched China in order to get closer to the US, as expected. As per a report by The Times, one of the oldest and most respected newspaper of Britain, which lend its name to publication like The New York Times and Times of India, Johnson has instructed civil servants of the country to prepare a comprehensive plan to end the UK’s reliance on Chinese imports for important products like medical supplies and others which would probably include 5G infrastructure.

The initiative would be led by foreign secretary Dominic Raab, official number 2 in the government, who is well-known for hawkish stance on China. Raab has already said a few weeks ago that it will be ‘no more business as usual with China’.

The shunning out all Chinese imports of non-essential items has been codenamed as ‘Project Defend’ by the UK government; and this project would identify UK’s economic dependence on ‘hostile foreign governments’ like China and carve out strategy to diversify imports and minimize trade deficit. As per British parliament library website, UK exports to China were worth £22.6 billion; imports from China were £44.7 billion, resulting in a trade deficit of -£22.1 billion.

“The coronavirus pandemic has demonstrated the importance of resilient supply chains to ensure the continued flow of essential items and keep global trade moving. That’s why we’re looking at what steps we can take to ensure we have diverse supply chains in place, to avoid shortages in the event of a future crisis,” said a government official.

After the US made is clear that no free trade deal is possible without shutting down doors for China as President Trump is now operating on ‘either them or us’ strategy, it was not hard to tell that British Prime Minister would choose ‘natural ally’ US.

Apart from historical and cultural ties, the UK has a healthier business relationship with the US than China, and therefore, it is obvious that Johnson would choose Trump over Xi Jinping.

The two nations have a very healthy economic ties. The US is the largest trading partner of the United Kingdom with bilateral trade amounting to 261.9 billion dollars in 2018 or 10 percent of the UK’s GDP. Exports to the US were 140.4 billion dollars while imports were 121.5 billion dollars, resulting in a trade surplus of 19 billion dollars.

Historically, the UK and the US had been allies at least since American independence. Most influential families of the US trace their roots to the UK and the Northeastern part of the United States is also known as New England. Both countries have coordinated in almost every foreign policy matter historically, including in American wars in the Middle East. Therefore, for the UK, US is obvious choice.

‘We have our friend India,’ Australia refuses to cow down and beg China, instead turns towards India